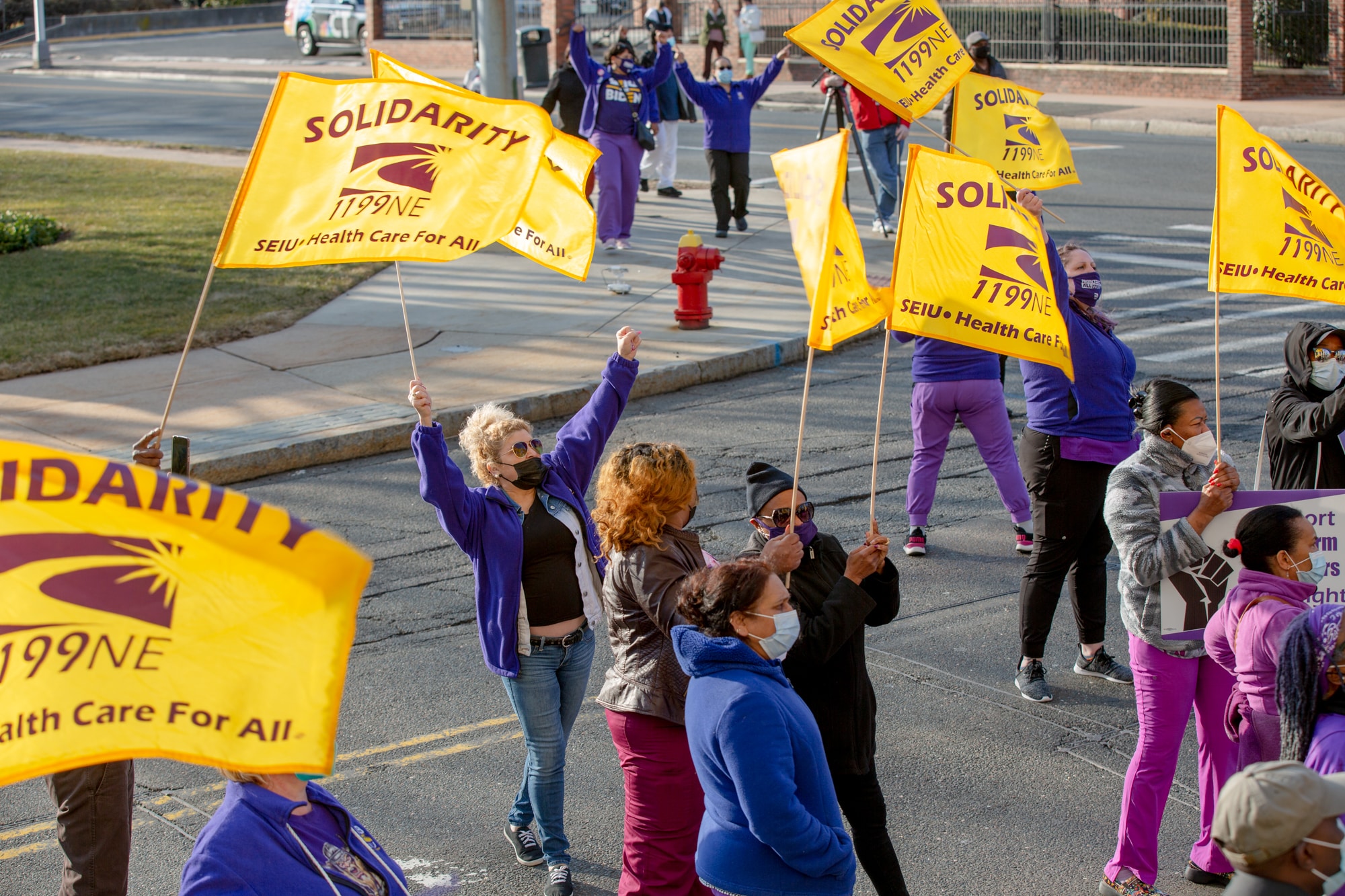 Long-term care workers block the intersection in front of the Department of Social Services to draw attention to the treatment of caregivers.

The head of the state’s largest health care workers’ union said Wednesday that the labor group and the state have not yet reached a deal to avert a nursing home employee strike planned for Friday.

But SEIU District 1199 New England did postpone plans to strike at seven of the 33 facilities targeted to face a work stoppage Friday because those care centers hadn’t made sufficient preparations for temporary staff.

“We are not there yet, although we remain in dialogue with all parties and hope that we can achieve the funding standards that are necessary to move people up,” said Rob Baril, the union president. “This workforce is, frankly, too often ignored.”

The union has said it wants to raise all workers’ pay to $20 per hour. Most nursing home caregivers currently earn hourly between $13 – the state minimum wage – and $15. An increase from $15 to $20 per hour is a pay hike of 33%. Raising all pay to $20 per hour and bolstering staffing levels likely would cost more than $200 million extra per year, the union says.

Matthew Barrett, president and CEO of the Connecticut Association of Health Care Facilities, has said the nursing home industry needs an extra $312 million annually to offset the revenue losses and rising costs that have developed since the pandemic began — a figure that doesn’t include any additional funds for enhanced pay or benefits for workers.

Members of Gov. Ned Lamont’s administration said on Tuesday that they had made a financial offer to try to avert a strike. The $280 million, two-year package that the administration publicly disclosed is “the best and final offer,” said Paul Mounds, Lamont’s chief of staff.

Lamont’s budget director, Melissa McCaw, said the $280 million investment spread over two years would, on an annual basis, represent four times the increase in nursing home funding that the industry has averaged since 2007.

But Baril said Wednesday that the offer was not enough to help recruit new workers to staff the facilities.

“While there is some movement, and there are some funds that were made available within the governor’s last proposal, it falls far short of what is necessary to stabilize the workforce and provide effective care for the residents,” he said. “At best, the governor’s proposal would move workers to a starting wage of about $16.50 [per hour]. Over time, you cannot recruit people to come in and staff nursing homes at $16.50. Companies are not able to recruit people, currently, in many cases at between $18 and $21 an hour.”

About 4,000 members of District 1199 spread across 39 nursing homes have warned of their intent to strike. Workers at 33 facilities had been set to stop work on Friday, with the remaining six homes setting a strike deadline of May 28.

But on Wednesday, Baril said that seven facilities that had planned to strike on Friday – all part of the RegalCare chain – were postponing their work stoppage until May 28 because the operator of those homes did not make arrangements for replacement staff.

“The caregivers understand that those workers should not have to deal with the level of trauma and risk exposure that will take place based on the complete incompetence and irresponsibility of [RegalCare] in not providing care for those residents,” Baril said. “So we are postponing the strike at those seven facilities.”

That means that 26 facilities representing 2,800 workers still have plans to strike on Friday, while 13 nursing homes representing about 1,200 employees are now planning to stop work on May 28.

A spokesman for the state Department of Public Health said the agency has not approved RegalCare’s strike contingency plans.

“Prior to the union’s rescission of the May 14 strike notices at RegalCare facilities, DPH was continuing to exert pressure on RegalCare regarding its contingency staffing and care continuity planning, and will continue to do so,” the spokesman, David Dearborn, said.

“DPH’s role in the event of a strike is to monitor and assess the care and services provided to residents to ensure protection of their health and safety,” Gifford said.  “Our professional staff are fully prepared and activated to do so.  The state of Connecticut will not sacrifice quality of care for nursing home residents.”