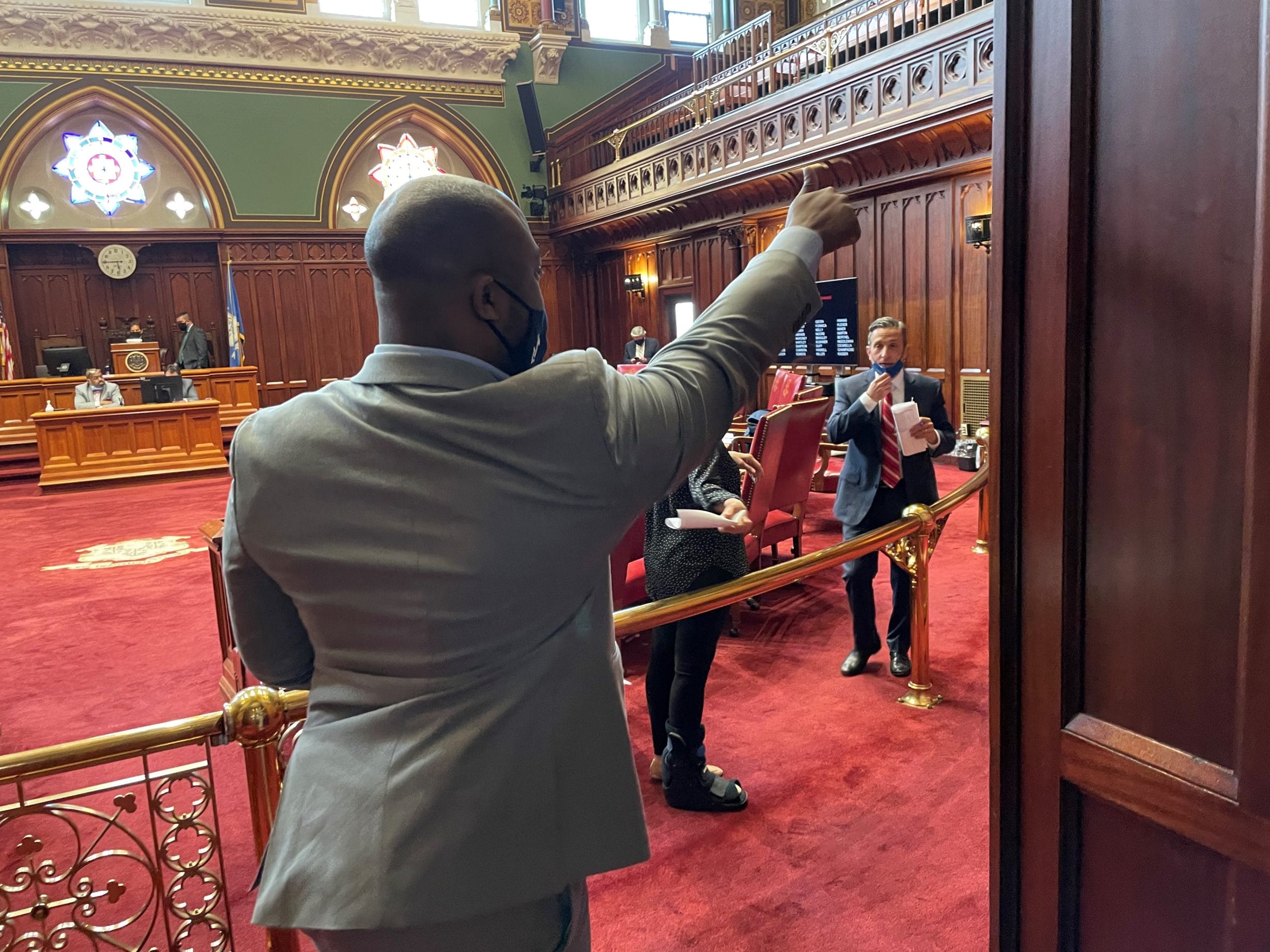 Paul Mounds, Gov. Ned Lamont’s chief of staff, gives a thumbs-up to Senate Majority Leader Bob Duff in the Senate chamber in the Connecticut state Capitol on Thursday, May 13, 2021 after getting a message that SEIU District 1199 New England had formally notified the state Department of Public Health that it had postponed a strike until June 7.

Gov. Ned Lamont reached a deal between the state’s largest health care workers’ union and the nursing home industry late Thursday afternoon that would avert a strike Friday at 26 facilities.

The agreement came two hours after the administration sweetened its offer to fund the industry in the next state budget.

“We have a basic agreement, which is a four-year deal, to put front-and-center our nurses who have been there at the nursing homes taking care of our seniors through thick and thin over the last 14 months,” Lamont said at 4:20 p.m. as he opened his televised briefing on the state’s coronavirus containment efforts. “And they will be getting a significant raise over the next four years.”

Now that the state has committed its resources to the industry — the toughest hurdle to clear —the various nursing home operators still must finalize contract details on wages and benefits with their respective workers and with SEIU District 1199 New England.

But the union wrote in a statement Thursday evening that one of the major chains involved, the iCare Health Network, already has agreed to a key demand, to elevate pay for certified nurses aides to a minimum of $20 per hour by 2023, along with enhanced health and retirement benefits.

“I want to acknowledge and thank the leadership of Gov. Ned Lamont, Speaker of the House Matt Ritter, Senate President Pro Tempore Martin Looney, Chief of Staff Paul Mounds and OPM [Office of Policy and Management] Secretary Melissa McCaw in making it possible to meet the goal of a Long-Term Care Workers’ Bill of Rights for nursing home caregivers,” union President Rob Baril wrote in a statement.

The head of the state’s largest association of nursing home operators also praised all parties for working to avoid a staffing crisis.

“Nursing home residents, their families, caregivers and the operators all can rest easier tonight with this critically important breakthrough achievement,” Matthew Barrett, president and CEO of the Connecticut Association of Health Care Facilities, said.

Technically, the threat of a strike isn’t removed entirely. The union pushed the strike deadline for 26 facilities from Friday until June 7. Another 13 homes where workers don’t have new contracts still face a May 28 deadline. And at least 12 other facilities have caregivers working under expired deals. But the industry and union were optimistic Thursday that all strike notices and threats would be cancelled in the near future once final labor agreements, based on the enhanced level of state funding, have been formally drafted and signed.

Lamont achieved a breakthrough Thursday, after nearly a month of mounting tensions, when he sweetened his offer for additional state funding for nursing home care.

Though the labor contracts are between nursing homes and the workers, the state is a key player in these talks. That’s because nursing homes receive the bulk of their revenue from the state in exchange for serving residents and patients covered by Medicaid.

The governor specifically pitched a 4.5% Medicaid rate increase for wages and health benefits in the coming fiscal year and a 6.2% hike in 2022-23. He originally proposed 4.5% for each of the next two fiscal years. These rate-based payments provide the resources homes will use to compensate workers.

At first glance, the administration’s revised offer Thursday appears smaller than what the governor was offering as late as Tuesday. In fact, the added cost in the next two-year, state budget cycle was $280.3 million under the first offer and $267.2 million under the final one.

But the big advantage the revised offer holds for nursing homes and its workers is that it includes the higher 6.2% Medicaid rate for facilities in 2023.

The higher rate would remain in place even after the next two-year budget expires, unless the legislature specifically votes to lower it, which traditionally does not happen.

That gives the industry greater security that enhanced state funding — which is needed to support the wage hikes and benefit increases — would continue well into the future.

“They were on the front lines for our most vulnerable residents during the worst pandemic in a century, and we rightfully lauded them as heroes. Now, with this agreement, we are putting money behind those words and financially supporting them for their critical work.”

Lamont’s original offer had included more one-time state funding to support hazardous pay bonuses and a stipend that workers could put toward their retirement. That was taken out of the final offer. And an original proposal to dedicate $13.5 million in state funds for worker training and development was reduced to $13 million.

The deal means 2,800 unionized caregivers will remain on the job Friday, and another 1,200 scheduled to strike on May 28 also will avoid a work stoppage.

Administration had said previous offer was the last

As late as Tuesday evening, the governor’s chief of staff, Paul Mounds Jr., insisted that the $280.3 million package Lamont had offered “was the best and final offer proposal which would be presented.”

Administration officials have noted that both of its offers are roughly four times the size of the average annual increase in state funding for nursing homes over the last 14 years.

But the administration carefully selected the timeframe to describe its proposals.

What many economists call the Great Recession began in 2007 and was followed by one of the most sluggish recoveries in state history, during which Connecticut lagged the nation in job and wage recovery.

In other words, few segments of state spending saw any significant increase during that period, and nursing home funding within the state budget averaged just 1.1% growth between 2007 and 2021.

And now, union leaders countered, the coronavirus has changed everything.

An industry whose caregivers are predominantly poor Black and Hispanic workers has been provided inadequate compensation and benefits for many years, and the pandemic has made many of those jobs intolerable, they say. District 1199 officials say 22 of their members died due to COVID-19 and hundreds more became sick because of it.

Most nursing home workers earn between $13 and $15 per hour, and the union predicted it would be difficult to attract adequate staff without base pay of $20 per hour.

An industry in crisis

Nursing homes in Connecticut have lost millions of dollars since the pandemic struck 13 months ago, due not only to increased health, safety and staffing expenses but also because of lost revenue. A significant portion of the industry’s revenue comes from patients temporarily assigned to homes for rehabilitation or recovery after surgery, yet the pandemic led many patients to delay operations and procedures whenever possible.

Lawrence G. Santilli, chairman of the Connecticut Association of Health Care Facilities, warned Lamont in a March 22 letter that the industry has entered an unprecedented time of financial instability.

Nursing home occupancy is down 15% from pre-pandemic levels, and federal and state Medicaid funding has long been inadequate to meet patient care costs.

On average, more than 80% of nursing home revenues involve patients whose care is covered by federal and state Medicaid dollars. Before the pandemic, though, that share was closer to 70%.

Industry and union officials first warned of a looming strike in mid-April when they noted caregivers at more than 50 homes were working under contracts that had expired on March 15.