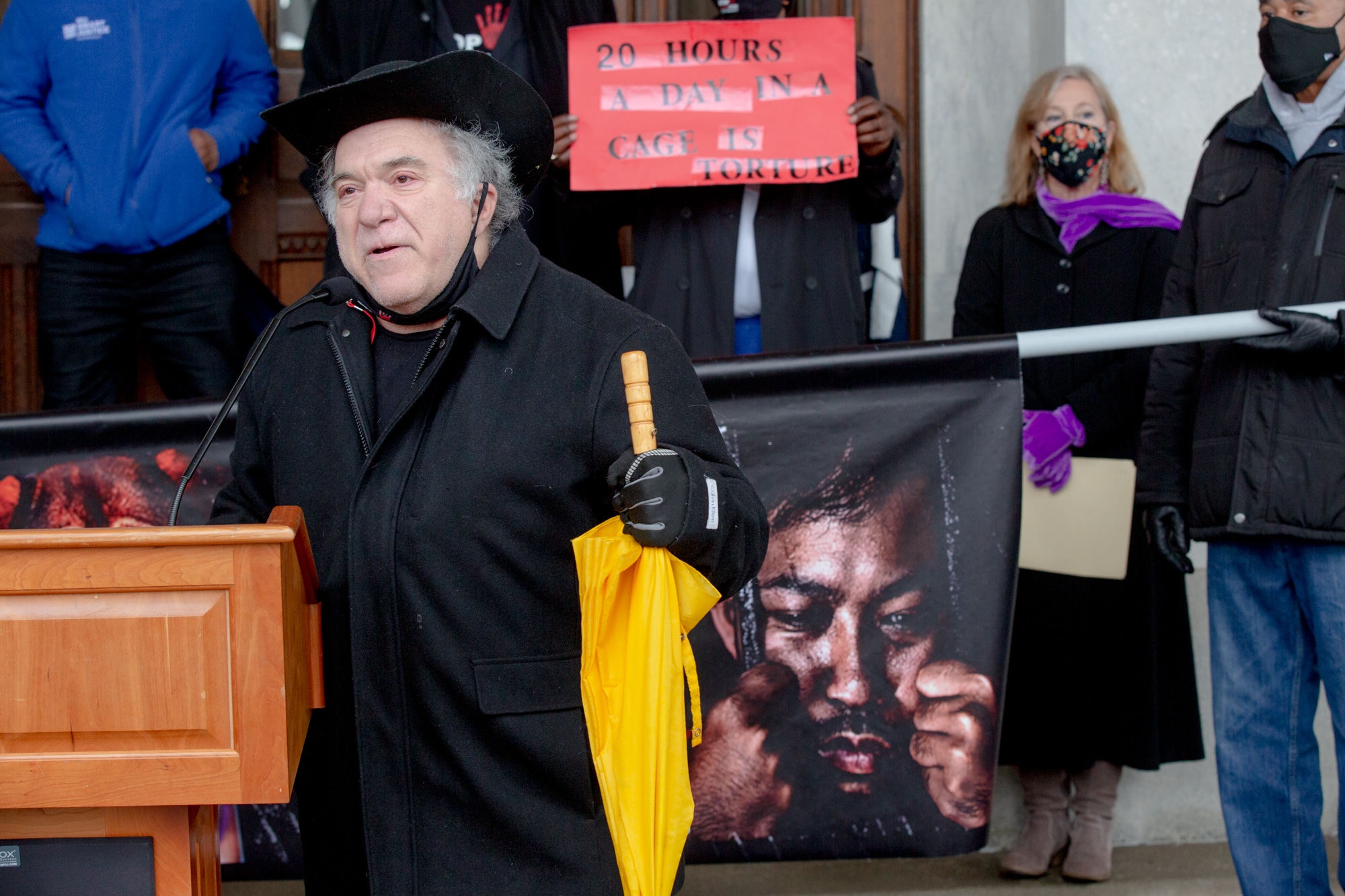 Paul Hammer asks for solitary confinement to be stopped in prison at a protest in March. Hammer is a member of a Quaker faith community, New Haven Friends Meeting. He said that Quakers contributed to the introduction of solitary confinement in prison, and his group is trying to help stop it after learning negative impacts on prisoners.

Lawmakers on the Appropriations Committee voted 30-16 Monday to advance a bill that would sharply curtail the use of isolated confinement on people incarcerated in state correctional facilities.

The vote comes after the nonpartisan Office of Fiscal Analysis released a report predicting the bill would cost the state around $20 million in fiscal years 2022 and 2023.

“The fiscal note has a lot of problems and requires a huge amendment,” Sen. Gary Winfield, D-New Haven and co-chair of the Judiciary Committee, told the members of the Appropriations Committee before the vote. “We were kind of surprised by it.”

Winfield said there were several inaccuracies and redundancies in the fiscal analysis that would make the bill cheaper than currently estimated: that the proposal does not require the hiring of a dozen ombudsmen, but rather a single ombuds to lead that office; that the bill’s section that would make some phone calls free is redundant in light of a bill that passed the Senate last week; and that a future amendment would expand the window in which corrections officials will need to perform an assessment of a person placed in solitary confinement.

“And so almost all of the costs that are imagined in that fiscal note will be eliminated with the new amendment,” Winfield said, clarifying in a phone call after his remarks to the committee that he will be filing an amended version of the bill. “I think the fiscal note is wrong, but I’m not even focusing on that; I’m just going to fix it.”

In a preview of the coming fight to get the bill passed through the House and Senate, Sen. Paul Cicarella, R-North Haven, a former corrections officer, said the use of solitary confinement is a helpful instrument for prison staff to manage prisoners who assault their peers or other corrections employees or who commit another crime while they’re locked up. Also, he said, not everyone in solitary has committed an act of violence; people who are being held on suicide watch or another form of protective custody could be incarcerated in similar ways.

“I think there may be some misunderstanding when it comes to solitary confinement that someone’s going to serve their whole sentence in [segregation,]” Cicarella said. “There are many reasons one could be punished while incarcerated. And without the tools that the officers may have, there’s no repercussions for actions.”

A 21-year veteran of the Department of Correction who worked in seven different correctional facilities, Sen. Cathy Osten, D-Sprague and co-chair of the Appropriations Committee, asked her colleagues to vote the bill out of the Appropriations Committee so the discussion could continue and pledged to sit down with Cicarella so she could outline his concerns with the measure.

Winfield said the bill is not the same one he has run in years passed. Three years ago, the measure he proposed would have outright prohibited the use of solitary confinement. This year’s requires incarcerated people to be permitted eight hours outside their cell each day, but there are exceptions, in cases of a facility lockdown or if another person faces imminent physical harm if that person were not in segregation.

“This is not a bill that eliminates the use of solitary,” Winfield said. “It’s a more measured approach than perhaps has been taken in the past.”