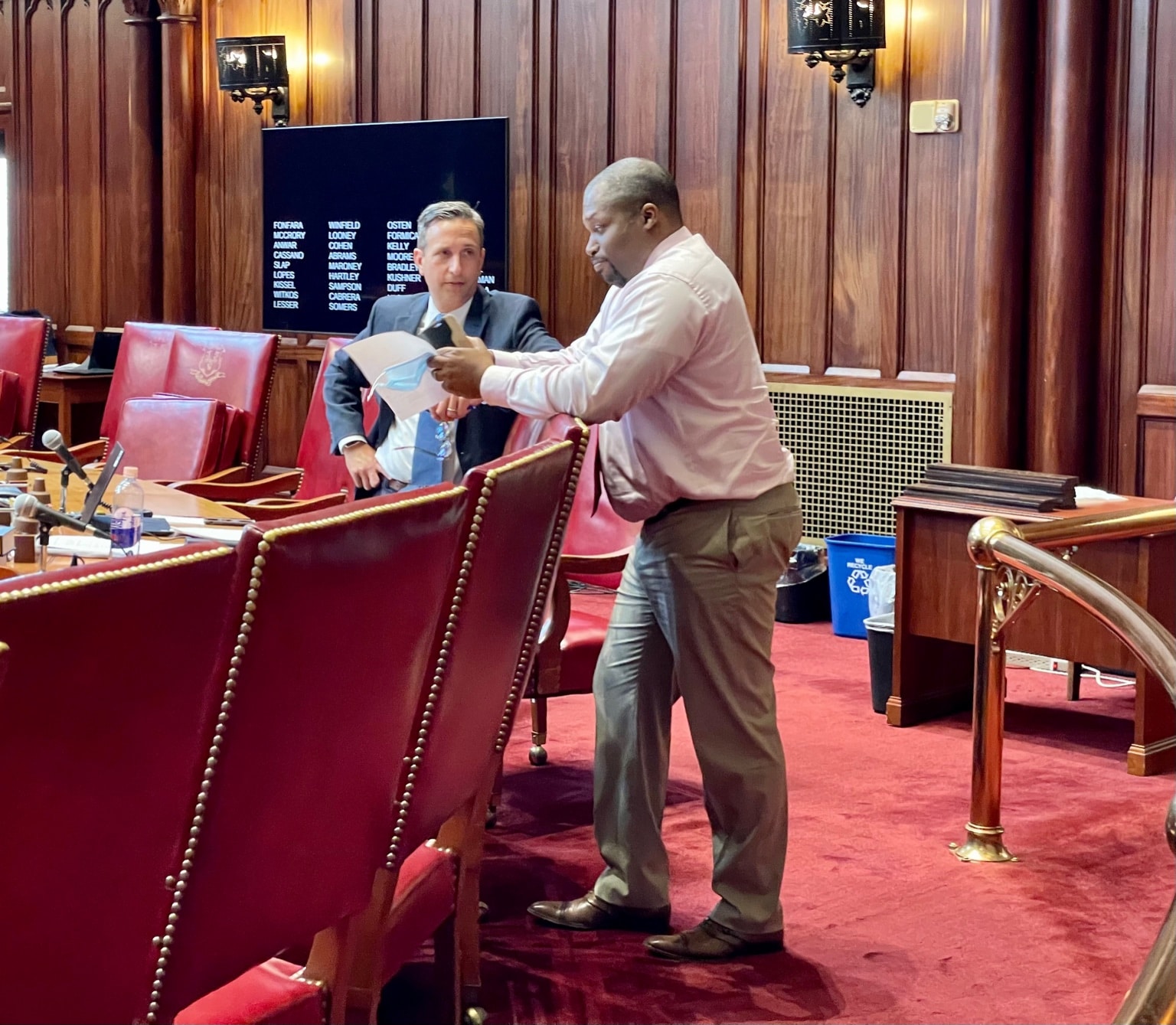 With the unlikely marriage of two controversial issues Wednesday night, the Senate may have ensured final passage Thursday by the House of a groundbreaking “clean slate” bill expunging the criminal records of thousands of Connecticut residents.

The Senate voted unanimously to take a Republican bill that revisits elements of the police accountability law passed last summer and amend it with language that narrows the reach of the Democrats’ record erasure bill now stalled in the House.

“A lot of the times you have things that start off as anathema to either side, and you figure out how to make them work for both sides, that’s what you do,” said Sen. Gary Winfield, D-New Haven, co-chair of the Judiciary Committee.

The clean slate bill would expunge the records of persons convicted of misdemeanors and lower-level felonies if they stayed free of additional offenses for seven or 10 years, depending on the crime, after completion of their sentences.

A significant bloc of Democrats in the House insisted that non-violent sexual offenses and crimes directed at children and other vulnerable victims be stricken from the list of crimes eligible for expungement in the “clean slate” bill passed by the Senate.

The simplest way to do that would have been for the House to amend Senate Bill 1019, the “clean slate” bill passed by the Senate. But that would have returned the bill to the Senate without a guarantee of passage in the waning days of the 2021 session.

House Speaker Matt Ritter, D-Hartford, suggested an unconventional solution: Use one bill to amend another. He correctly assumed that a bill narrowing the crimes eligible for erasure would get Republican support and quick passage in the Senate.

The bill chosen as the vehicle to fix clean slate was Senate Bill 1093, a Republican bill that provides changes to the 2020 police accountability law. It gives police officers the right to review body camera footage before release, and creates a process for objecting to a subpoena by a civilian police review board.

Winfield voted against it in committee, primarily because of a provision that would have repealed protections against police asking motorists for permission to search a motor vehicle without cause. That provision was stripped from the version of the bill approved Wednesday night.

The machinations and the relationship between the two Senate bills, 1019 and 1093, may be confusing to follow. But the result is the House now has possession of both bills, and it can vote on final passage of an acceptable version in a single day without further Senate action.

Ritter said he will call votes on both bills Thursday, the last scheduled session day before the Memorial Day weekend.

Even the revised version of clean slate is unlikely to draw significant, if any, support from Republicans. Sen. John Kissel, R-Enfield, called the narrower list of offenses eligible for erasure “a step in the right direction, and I applaud that.” But he still found the overall erasure bill to be too generous.

Gov. Ned Lamont, who proposed a clean slate bill last year that would have applied only to non-violent misdemeanors, indicated Wednesday he was uncomfortable with the original Senate version — and still wary of any measure more ambitious than his own.

“I would tend to walk before I run,” Lamont said. “I tend to start with a narrower set of non-violent crimes, show that the system works, and then expand from there. That would be my inclination.”

Lamont would not say whether that inclination would lead to a veto or a demand for further changes.