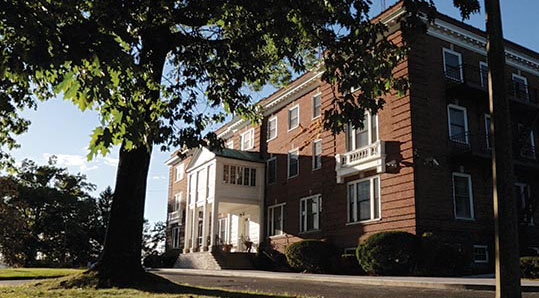 Hundreds of developmentally disabled group home residents, trapped in a game of state budget brinkmanship, could be transferred into nursing homes next Thursday unless that battle is resolved soon.

At least two of the private, nonprofit agencies hired by the state to run group homes have begun plans to move clients into congregate care centers — or to send them to live with their families — if about 2,000 human service aides belonging to SEIU District 1199 New England go on strike next Friday.

Union members, who say they have faced years of low pay and poor benefits — and then risked illness and death working during the first year of the coronavirus — insist conditions must improve.

The industry, which delivers the bulk of state-sponsored social services, is pressing Gov. Ned Lamont and the General Assembly to reverse more than a decade of under-funding.

And while the legislature’s Appropriations Committee has crafted a comprehensive, seven-year plan to close that gap, it’s unclear whether state officials will approve a new budget before the work stoppage happens.

The prospects of averting a group home strike appeared good on May 20, when the union pushed a planned May 21 strike deadline back to June 4, citing two positive developments.

Lamont and the legislature had pledged a significant increase in state resources to avert a potential strike by District 1199 caregivers in nursing homes — another industry that relies heavily on public funding.

And two key Lamont aides — chief of staff Paul Mounds Jr. and budget director Melissa McCaw — wrote to the union at that time expressing optimism that a solution could be found for group homes as well.

“We believe that our constructive dialogue and commitment to a robust package of wage and benefit enhancements for nursing home workers signals our willingness to also seriously consider the health and economic security of direct care workers” in group homes, they wrote.

But union spokesman Pedro Zayas said Friday that the union still is waiting to see more evidence of that commitment.

“We’re still hopeful, as the governor’s team showed in the nursing home work-stoppage crisis that they will be able to deliver similar leadership,” Zayas said Friday.

Both Oak Hill and Journey Found are looking at transferring residents because administrators are struggling to find temporary workers.

Barry Simon, CEO of the Oak Hill School, said Oak Hill needs about 400 temporary workers to provide an adequate skeletal staff but has been able to secure just 13 to date. Given that challenge, he estimates between 150 and 200 group home residents would have to be moved  temporarily to nursing homes starting Thursday.

Journey Found, which is facing a strike at 16 of its 30 group homes, needs 32 temporary workers and has secured none yet, said Tracey B. Walker, CEO of Journey Found. The nonprofit must secure alternative care options for 51 residents, she said, adding that process is still in the works, and at least 12 residents will temporarily stay with their families.

And Gian-Carl Casa, president and CEO of the CT Community Nonprofit Alliance, said the potential for more displacement is real.

It wasn’t clear Friday morning if more transfers would happen, but Casa said Whole Life Inc. has secured 12 temporary workers so far to cover for 350 regulars scheduled to strike.

Meanwhile, families are feeling “incredible consternation” as they receive warnings their relatives may soon be displaced, Simon said.

“Imagine how you would feel if your loved one were in this position,” Simon said.

“Change does not come easily” for these clients, many of whom have “significant behavioral challenges” and are on the autism spectrum, Walker said. Journey Found operates 30 locations in north-central and southeastern Connecticut.

If contingency plans are executed, these clients “will be staffed by people who don’t know them very well,” Walker added, “people they’ve never seen before.”

Industry leaders said getting affordable help has become far more challenging since the pandemic began because of the health-care risks associated with human services work.

Edwin “Win” Evarts, executive director of The Arc Connecticut, which advocates on behalf of families of the disabled, said most nonprofit social service agencies were understaffed even before the pandemic.

“Those shortages, they’re real and they’re systemwide,” he said.

Evarts added that officials shouldn’t underestimate the stress these potential transfers place on group home clients and their families. Temporary workers, even though they’ve been trained, simply can’t match the bond developed between clients and their regular caregivers. “Getting up to speed on who you’re supporting takes time. And if its a constant merry-go-round of people, that’s very problematic,” he said.

Casa’s alliance, the state’s largest coalition of nonprofits, estimated last year that the industry’s annual compensation effectively is $461 million below what it was in 2007, after adjusting for inflation. The committee plan would raise annual payments to the industry by $470 million by 2026.

But while both Lamont and top lawmakers say negotiations are proceeding well on the next two-year state budget, it’s unclear whether that will be resolved before the regular 2021 General Assembly session closes on June 9 — let alone before next Friday’s strike deadline.

Union officials have said they’re confident the legislature will support the package but are less certain about the governor, a fiscally moderate Democrat.

Sen. Cathy Osten, D-Sprague, co-chairwoman of the committee, joined industry leaders Friday in urging Lamont and the union to find some common understanding that would delay a work stoppage until after the budget’s adoption.

“The administration and the union have to have a conversation,” she said, adding “I know this [crisis] is avoidable.”

But the governor faces his own challenges, and budget issues rarely are resolved in a vacuum.

Lamont, for example, is trying to block legislative proposals to impose two income tax surcharges on the wealthy and a levy on digital media ads,.

Max Reiss, Lamont’s communications director, said Friday that  “We look forward to reaching an agreement and for a swift resolution that will not disrupt care or services. Finding a realistic and reasonable solution is a high priority for the administration, and we will continue to engage in productive conversations with the stakeholders.”