Prison phone call bill gets final passage in the House 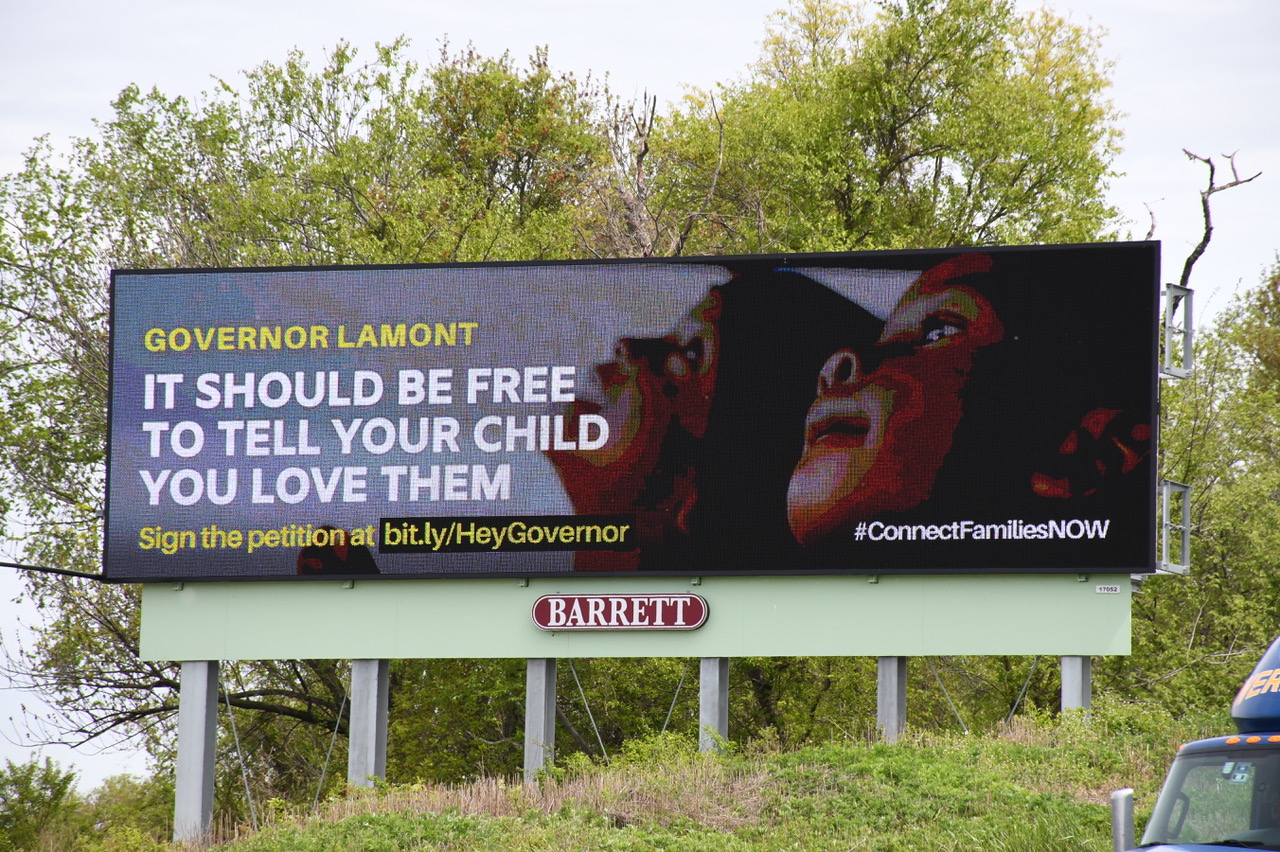 A billboard on I-91 in West Haven over the summer calling on Gov. Ned Lamont to make phone calls free at correctional facilities across the state.

Members of the House of Representatives voted 94-51 shortly after midnight on Friday to make it free for the 8,960 people in prisons and jails to call their loved ones, sending the bill to Gov. Ned Lamont’s desk.

“When someone who is incarcerated wants to call home, wants to call a loved one, stay in touch with kids, stay in touch with family, with friends, with support network in the community, the state of Connecticut has been gouging them for years,” said Rep. Steven Stafstrom, D-Bridgeport and co-chair of the Judiciary Committee. “We have profited off of this practice for many, many years to the detriment of those in prison and those they love.”

The calls are expensive: it can cost almost $5 for a 15-minute conversation. Shortly before the bill passed the Senate on May 20, Sen. Martin Looney, President Pro Tem of the Senate and a New Haven Democrat, said that legislators first raised concerns about the cost of prison phone calls two decades ago.

The state announced a four-cent reduction in the cost of the calls effective July 1, but advocates contend that modest reduction only takes Connecticut from 50th to 45th in the nation for affordability of prison phone calls.

The money generated from the phone calls goes to a private company, Securus Technologies, which collects and passes funds through to the state, paying for state supervision overseen by the Judicial Branch, the Criminal Justice Information System and for Department of Correction programming.

The bill’s fiscal note estimated it would cost the DOC up to approximately $4.5 million in Fiscal Year 2023 if the calls were free.

Before the bill passed out of the Appropriations Committee earlier this month, Sen. Cathy Osten, D-Sprague and the committee’s co-chair, said phone call revenue that would have gone to the Judicial Branch and the state’s Criminal Justice Information System will be replaced with money saved by closing Northern Correctional Institution.

Republicans tried to float an amendment that would not allow the state to profit off the communications, but still mandate that the incarcerated pay for the cost of the phone call.

“I think that the state profiting on communications between someone who really has no other way of communicating with their family is reprehensible,” said Rep. Craig Fishbein, R-Wallingford, who is ranking member of the Judiciary Committee. “However, what we have before us here tonight doesn’t level the playing field. Rather, it shoulders the taxpayers with the burden of paying for those communications.”

Stafstrom said one of the best ways to make it less likely for those released from prison to wind up reincarcerated is to keep them connected to their loved ones.

“This bill allows everyone to do that regardless of their means,” said Stafstrom, arguing that the measure will pay for itself by cutting down on recidivism rates.

Others argued that taxpayers are already footing the bill. Rep. Joshua Elliott, D-Hamden, pointed out that those picking up the tab for the cost of the calls now are the family members of incarcerated loved ones, who are often victims themselves.

“The people who are paying this right now, are also taxpayers, except that this tax is hyper-targeted to a very specific set of the population: People who are not doing as well socioeconomically as well as others, people who have suffered more trauma than others,” Elliot said. “Even if you view prison purely through a lens of punishment, and you don’t think that it should be about rehabilitation, charging folk for these telephone calls goes above and beyond what their prison sentence is.”

One of those family members is Rep. Christopher Rosario, D-Bridgeport, whose brother has been incarcerated since 2014. He ticked off the amount of money he spent so far this year to stay in touch: $96 in January, $89 in February, $92 in March, $111 in April and $129 in May.

“That’s about $1200 a year that I am paying to talk to my brother,” Rosario said. “And when he had COVID, and he couldn’t taste, he couldn’t smell, he had fevers, and he gave me his living will over the phone, I hoped and prayed that he would call me again. And I would pay every single cent to speak to him again… there’s thousands of people like myself, and I’m fortunate enough that I’m able to afford to pay it, but there are those that don’t.” 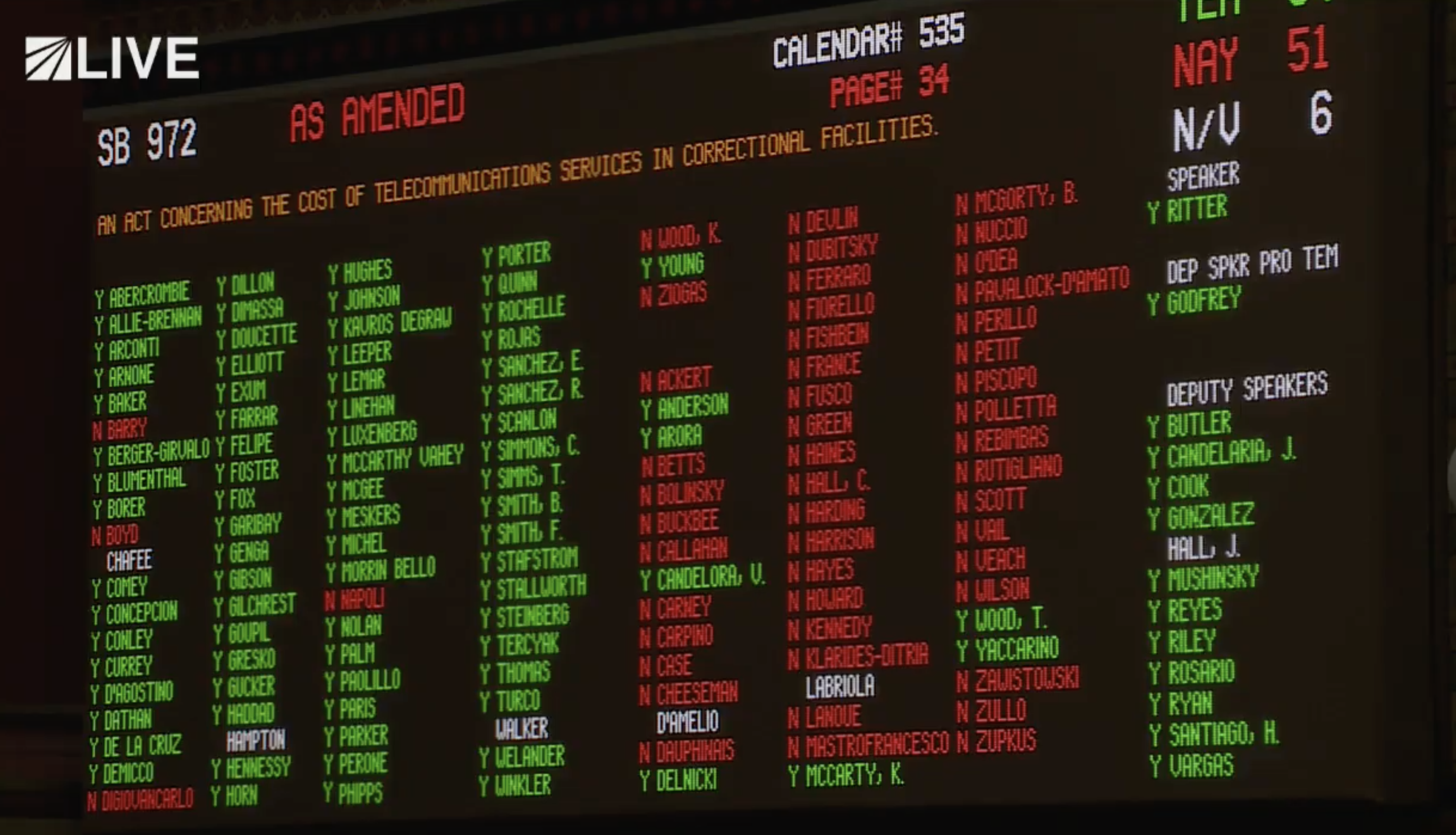 The final tally of the prison phone vote in the House.