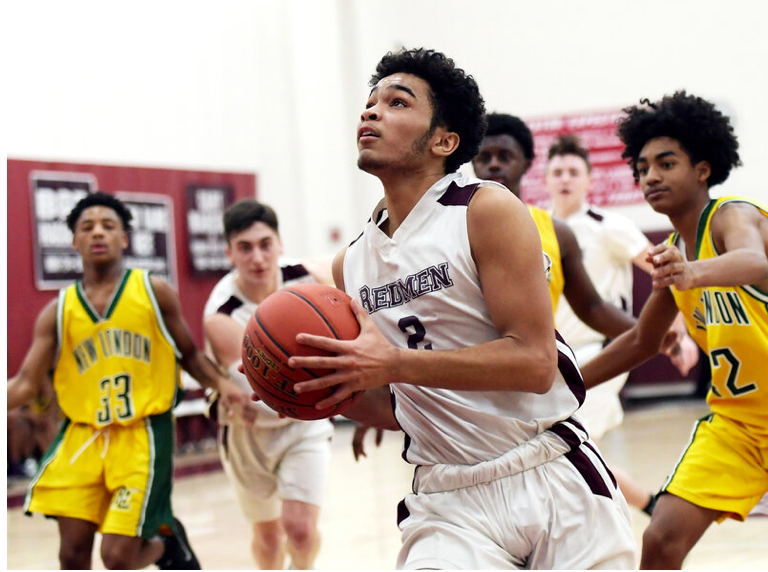 Sam Deronsle drives to the basket during a basketball game at Killingly High School on Jan. 14. Deronsle is wearing a Redmen jersey after school board members voted to reinstate the mascot.

In Connecticut’s quiet corner, the small town of Killingly made national news a year ago by reinstating “Redmen” as the high school mascot, angering local tribes and countering a trend of stepping away from imagery and names offensive to Native Americans.

Budget language written by Sen. Cathy Osten, D-Sprague, whose district is home to the Mashantucket Pequot and Mohegan Tribal Nations, would make Killingly pay for that decision by costing the town its share of state aid generated by tribal casinos.

On page 77 of an 837-page budget implementation bill scheduled for a vote Tuesday by the Senate is a provision denying aid from the Mashantucket Pequot and Mohegan fund to any community with a team or school using a Native American mascot or nickname.

“Why should they get money from Native Americans and they don’t want to not disrespect them?” Osten said, speaking by telephone as she drove to Hartford for the Senate session.

Killingly would be one of a dozen or so communities to lose the Pequot Mohegan money, a relatively small source of aid to municipalities. Killingly’s share in the current fiscal year is $94,184.

The Pequot Mohegan fund takes a portion of the slots revenue the tribes pay the state in return for exclusive rights to casino gambling and distributes it to cities and towns. The tribes are the owners of Foxwoods Resort and Mohegan Sun casinos.

Osten, the co-chair of the Appropriations Committee, has outsized influence in crafting the budget implementation bill, a measure that traditionally becomes a catch-all for last-minute changes to the budget and legislation that did not win passage.

This year’s version was made public about 3 a.m., when it was entered in the legislative website as Senate Bill 1202. Under legislative rules, the bill must be public for at least 12 hours before it can be debated.

Among other things, the bill codifies raises for state judges, cuts funding for a state contract oversight board, addresses voting rights and solid waste disposal and gives organized labor a victory or two: One provision would deny state aid to any company that moves a call center offshore; another would provide protections and aid for domestic workers.

The Senate is meeting in special session Tuesday for the sole purpose of voting on a marijuana legalization bill and the budget implementer. The House of Representatives will take up the measures on Wednesday.

On Tuesday morning, the hunt began for the winners and losers in the implementer. By Tuesday afternoon, the Senate Republican minority was complaining about how it was produced and what it contains.

Senate Minority Leader Kevin Kelly, R-Stratford, hefted a printout of the bill, some four inches thick, and said, “It’s what the majority has worked on for the past four days and literally was given to us in the middle of last night.”

Sen. Craig Miner, R-Litchfield, a lawmaker in the minority for 18 of his 20 years in the General Assembly, said he was furious at the Democrats for ambushing the GOP by not giving notice of provisions they knew would be controversial. 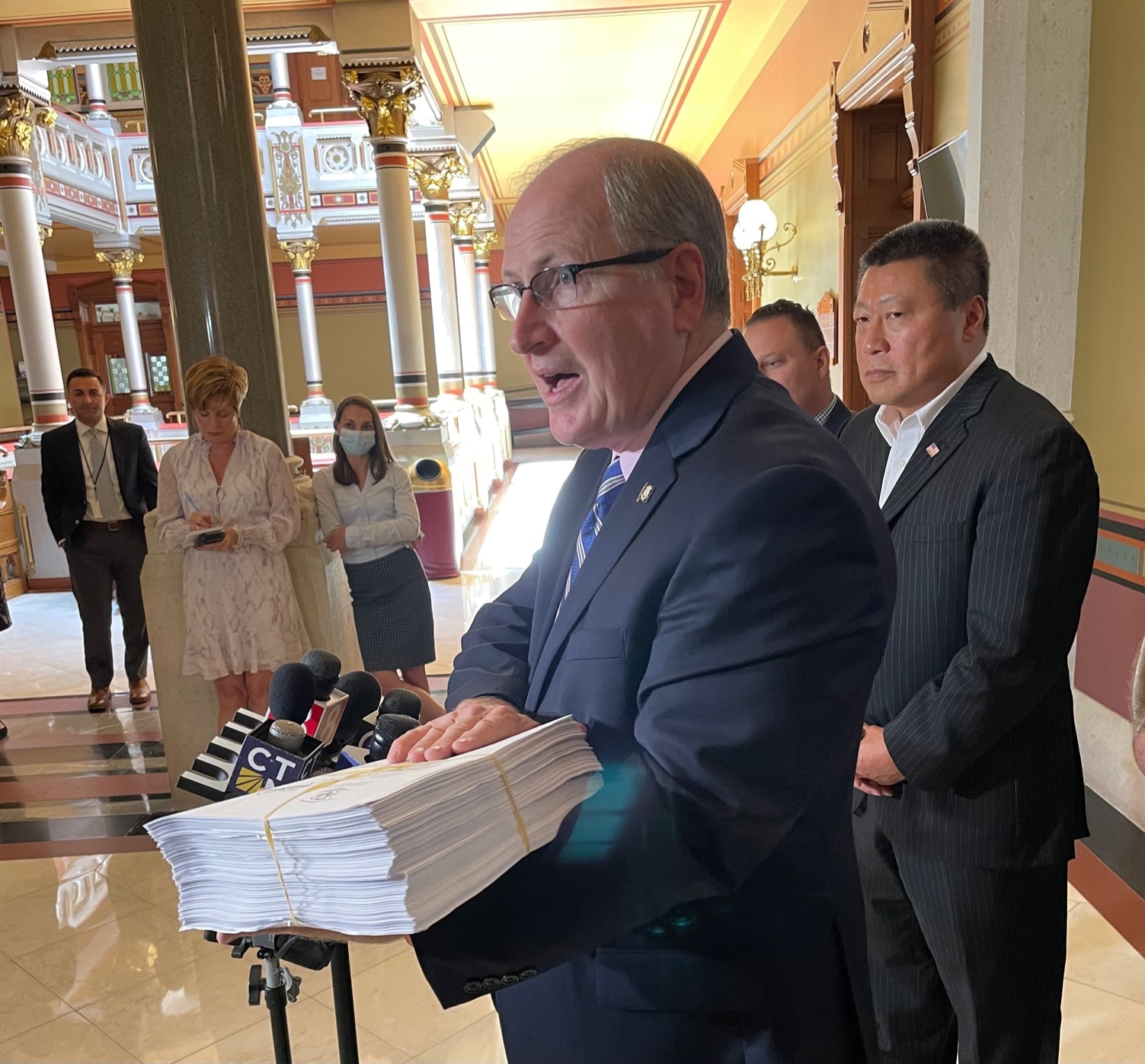 The bill was negotiated by the Senate and House Democratic caucuses, plus the administration. House Speaker Matt Ritter, D-Hartford, said any one party to the talks had veto power. But the reality is more subtle: the players had to pick and choose where they would exercise a veto.

The State Contracting Standards Board, an oversight panel that has been allowed to languish without staff, is among the significant losers, even though Osten was an advocate.

The implementer allowed about $450,000 funding for five vacant positions to lapse back into the general fund. The board’s sole employee since early 2017 has been its executive director David Guay, who is retiring next year, leaving the future of the board in doubt.

“Hopefully some of the board members will be taking on some of the duties,” Guay said. “This is still important stuff.”

Max Reiss, the spokesman for Gov. Ned Lamont, said the state’s contracting process is open to public oversight, with every contract and request for proposals on the state’s open-government portal.

Osten said she tried and failed to increase funding and expand the board’s oversight over quasi-public agencies, such as the Connecticut Port Authority, whose management of State Pier in New London is the source of a major dispute with the city of New London.

The board had been investigating the port authority when a legal opinion from the attorney general indicated it lacked the jurisdiction.

The implementer does have funding for volunteer fire departments in distressed communities, which will benefit Norwich, a community in Osten’s 19th Senate District.

The Native American mascot issue upended Killingly, which is outside her district in the northeastern corner. At the urging of students, the school board there changed the name to Redhawks, but community anger helped Republicans win a 5-4 majority that reinstated the old name.

Osten said her budget language gives communities a year to change their mascot names without losing funding, but that does not appear to be what the bill does.

It states that “for the fiscal year ending June 30, 2022, and each fiscal year thereafter, no municipality shall be paid a grant from the Mashantucket Pequot and Mohegan Fund … if a school under the jurisdiction of the board of education for such municipality, or an intramural or interscholastic athletic team associated with such school, uses any name, symbol or image that depicts, refers to or is associated with a state or federally recognized Native American tribe or a Native American individual, custom or tradition, as a mascot, nickname, logo or team name.”

UPDATE: The bill was amended to push back the effective date by one year.