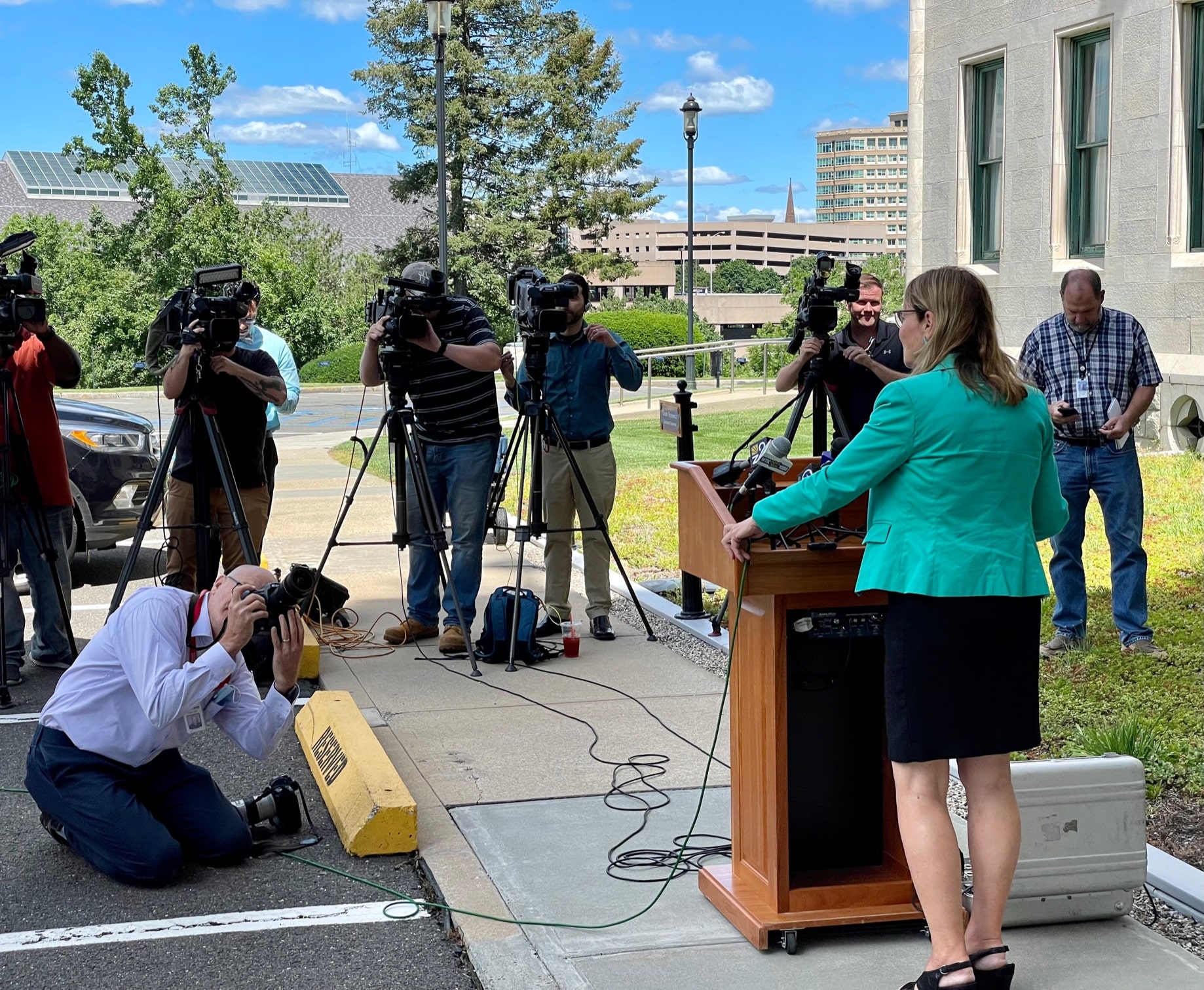 Secretary of the State Denise Merrill announces she will not seek a fourth term, creating the first open statewide race of 2022.

Secretary of the State Denise Merrill announced Wednesday she will not seek re-election to a fourth term, the first concrete move towards shaping a 2022 election cycle expected to be dominated by the re-election bids of Gov. Ned Lamont and U.S. Sen. Richard Blumenthal.

Merrill, 72, intends to exit politics in January 2023 after three decades in Hartford, first as a state legislator who rose to House majority leader, then as the statewide elected official overseeing business filings and elections administration.

“I like to think these jobs are borrowed jobs,” said Merrill, a Democrat who seriously considered leaving the office after two terms. “No one should be here forever. People come in with new ideas. I’ve been in for three terms, almost.”

Unlike in 2018, when Merrill and Comptroller Kevin Lembo were the only statewide constitutional officers seeking re-election, the governor, lieutenant governor, treasurer and attorney general are first-termers and are expected to run again. Lembo has not ruled out a fourth term.

“I wanted to give people who want to run for this office a chance to get their election [campaign] going and started,” Merrill said. “I didn’t see the point of dragging it on through the summer if I already knew what was going to happen.”

Merrill’s tenure covers one of the most volatile eras in American elections, with public confidence shaken by Russian interference and cyber-threats in 2016 and President Donald J. Trump’s baseless insistence that the 2020 presidential election was rife with fraud.

In Connecticut, a state with some of the most restrictive laws pertaining to absentee voting, Merrill was the face of an aggressive campaign to convince the governor and legislature to temporarily loosen the rules during the COVID-19 pandemic in 2020.

Lamont and lawmakers responded with an executive order and legislation allowing any voter concerned about going to the polls during the pandemic to cast an absentee ballot, leading to unprecedented levels of absentee voting and, overall, high turnout.

“Our election in 2020 was a resounding success — more people voting, more voter turnout, more people registering to vote, and more easily than ever before in the history of the state,” Merrill said. “But it also exposed the inflexibility of our system.”

Voters will be asked in 2022 to vote on a constitutional amendment allowing early voting. But Republican opposition delayed a second question until at least 2024 on whether to allow lawmakers to authorize no-excuse absentee voting.

Merrill’s performance in 2020 drew sharp criticism, especially from Republicans, over her decision to make a mass mailing of absentee ballot applications — though not the actual ballots, as some wrongly complained — to every voter on the rolls.

The mailing exposed inaccuracies in the voter lists maintained by local registrars.

About 100,000 of the 1.2 million absentee ballot applications mailed to Democrats and Republicans for an August primary were returned as undeliverable.

The 8% return rate was well below what the U.S. Election Assistance Commission says is typical of elections mailings — an average of 15%. Some voters conflated the misaddressed applications with ballots, prompting concerns about ballot security.

Merrill said she hopes to play a role in restoring voter confidence.

“Healing, our country will take Republicans, Democrats and unaffiliated voters all working together. And I look forward to playing a part in that process,” she said. “I also look forward to continuing to encourage more women to get involved in politics, as I have all my career.”

No Democrat has filed either campaign or exploratory campaign papers for the office. One Republican, Brock L. Weber, has created a campaign committee. 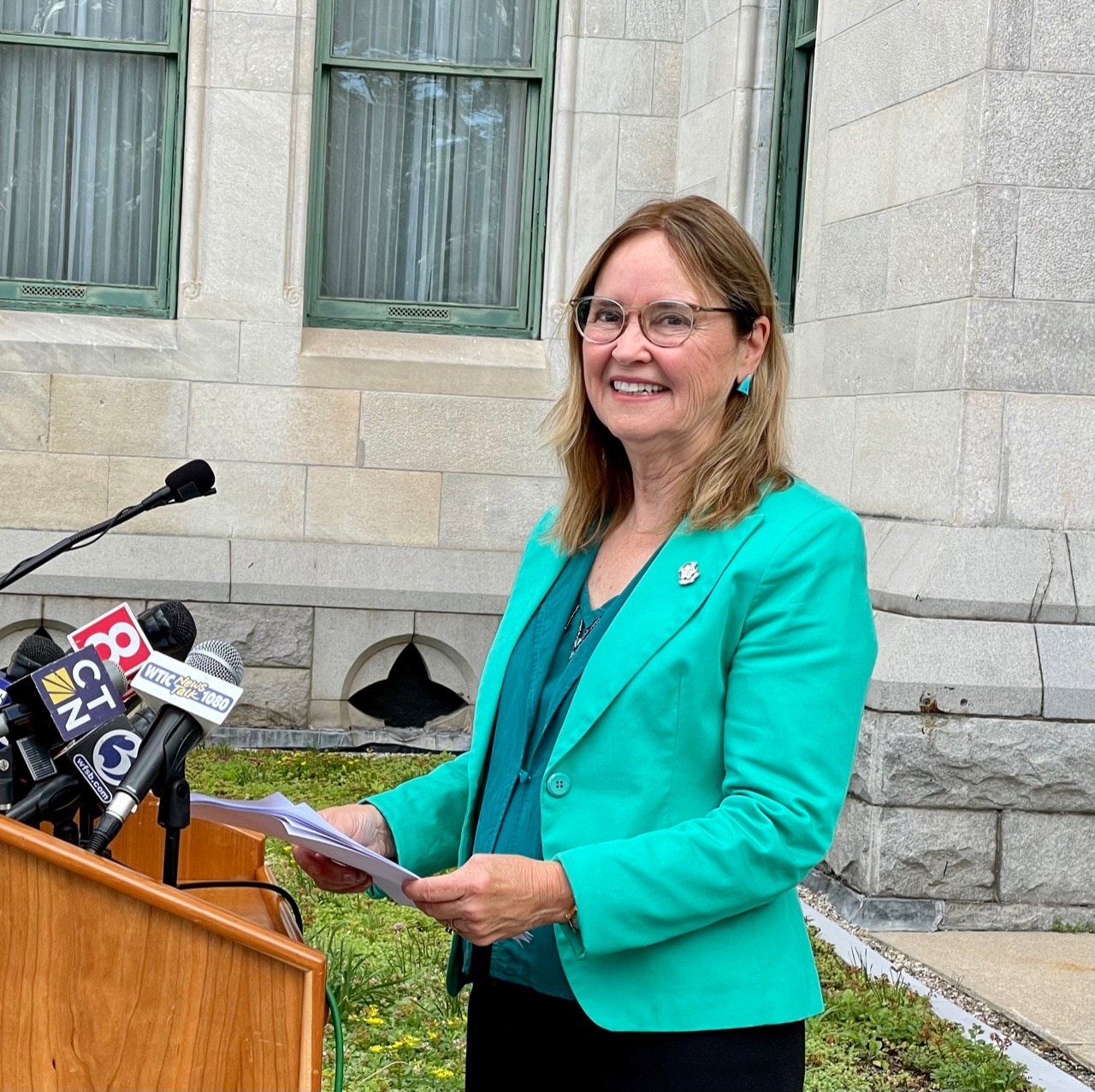 Four years ago, Matt Lesser, then a state representative, opened an exploratory campaign for secretary of the state in the expectation that Merrill would not run. Instead, Merrill announced in August 2017 that she would, indeed, be a candidate for re-election.

Connecticut has a highly accessible system for voter registration, with election-day registration and automatic registration offered through the Department of Motor Vehicles. But the voting infrastructure is facing the need for a major upgrade.

Votes are cast on paper ballots, tabulated by optical scanners now approaching the end of their useful life.

Connecticut’s elections essentially are local undertakings, guided by state law and the secretary of the state. Once inclined to seek a greater degree of centralization in elections administration, Merrill said now is not the time to minimize the local role.

“At this point, where there’s so much concern nationally about how elections are administered, I think it’s probably the wrong time to make too many changes,” she said. “We have to maintain the trust of the public in our elections.”

Having registrars of voters in 169 cities and towns might be inefficient but is not without value, Merrill said.

“I think it preserves confidence at the local level, that there’s still somebody you can talk to there about your elections,” she said. “And it’s from both parties.”

CORRECTION: No Democrat has filed for the office. As originally posted, the story incorrectly reported that no candidate had filed.