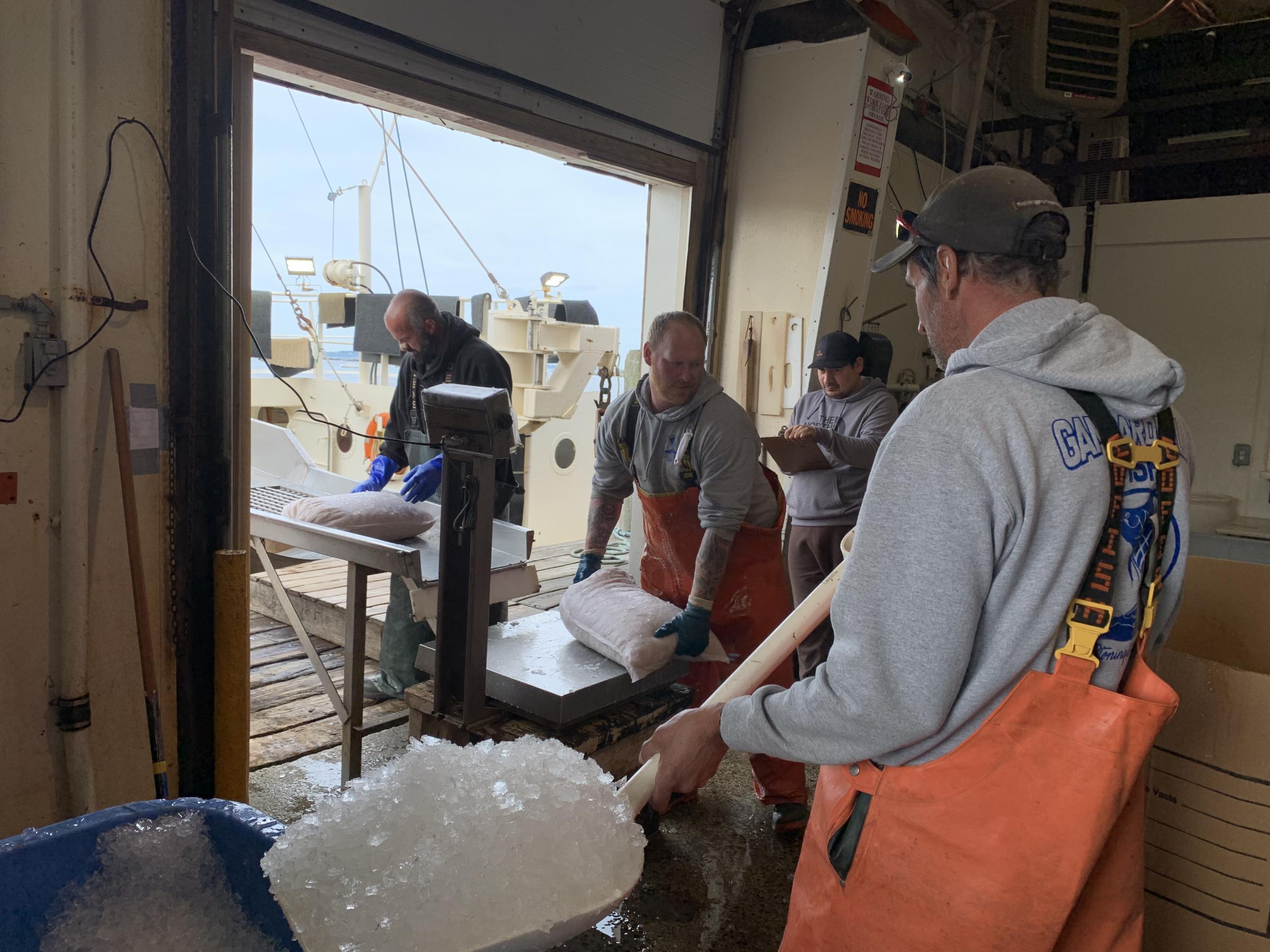 Bags of scallops are offloaded and weighed at the Stonington town dock.

On a clear morning in early June, cotton sacks filled with shucked scallops hit the scale at Gambardella’s dockside warehouse in Stonington, Connecticut. They’re being offloaded from the Furious, a scallop boat just back from a 12-day trip.

Owner and longtime fisherman Joe Gilbert runs four scallop boats out of this dock. Up in the wheelhouse of the Furious, he indicated on a chart where in the future, this same trip might be a lot more difficult to navigate.

“This entire area here is slated to be a wind farm,” he said. “It’s an area larger than the state of Rhode Island.”

In its pursuit of green energy, the Biden administration has given strong backing to the nascent offshore wind industry in the U.S. While Europe has 20 years of experience developing offshore wind, it’s relatively new in North America.

Last month saw the final approval for the very first commercial-scale project, Vineyard Wind, off the coast of Massachusetts — just one of 14 projects being considered off the Atlantic coast.

But these aren’t empty seas. Plenty of other ocean users have concerns about the massive steel turbines being erected offshore, not least commercial fishing, which is a multimillion-dollar industry in New England.

The Responsible Offshore Development Alliance has taken the lead in advocating for the fishing industry. Its major concern is that fishing vessels could strike one of the massive wind farm turbines in bad weather. In addition, the spinning blades interfere with the radar vessels use to find their catch. And fishermen like Gilbert worry that the structures will alter the ocean ecosystem as they change current patterns and cause formerly distinct layers of water to mix.

“We’re racing forward without the proper science to evaluate if this is good or if this is bad,” said Gilbert.

But there is research from Europe, according to Amanda Lefton, director of the federal Bureau of Ocean Energy Management.

“While offshore wind is new to us in the United States, it’s certainly not a new technology in other places,” she said.

The federal agency is in charge of leasing tracts of the ocean for wind projects.

“As we actually seek to look at what will we actually lease, we’re even further narrowing those areas to try and do our best to avoid conflicts with ocean users,” Lefton said.

Orsted, a Danish giant in the wind farm business, has five projects planned for the Atlantic coast. John O’Keeffe, the company’s head of marine affairs in North America, said the concerns of the fishing industry have been incorporated into the process.

“It’s a good storyline to say you had no input, but the reality is there’s been input for years,” he said.

Orsted recently signed an agreement with one fishing industry group based in Waterford, which will use its vessels for research and liaison as the turbines are placed offshore in the company’s Revolution, South Fork and Sunrise wind projects.

“The spacing that is agreed to is the largest spacing in the world,” O’Keeffe said. “One nautical mile spacing. It does not exist anywhere else.”

But the coexistence of these two industries is still in doubt. In its part of a recent approval of one project, the federal Army Corps of Engineers said the difficulty of navigation means that commercial fishing likely will be abandoned within the new wind farms.

Back in Stonington, that’s exactly what Joe Gilbert fears.

“We’re afraid we’re going to lose our livelihoods. This is an existential threat to us,” he said.

Gilbert wants to know why the turbines must be dropped on top of fishing grounds in the first place. He’d like to see them sited in deeper water far from shore.

Some Atlantic coast wind farm companies are in talks to establish compensation funds for economic damage to commercial fisheries as part of the federal approval process.