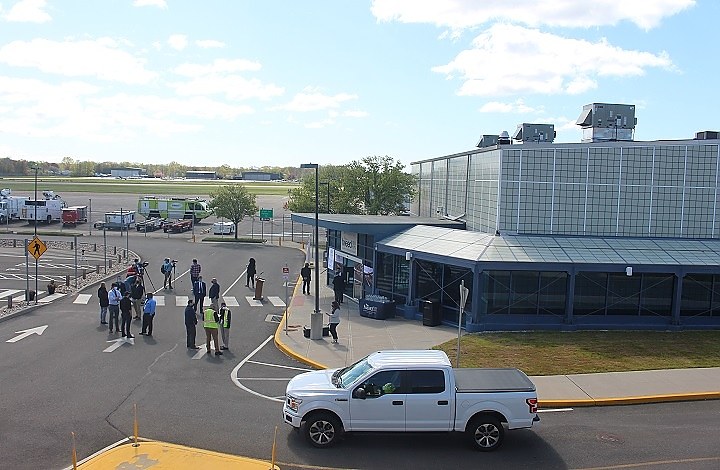 The current Tweed terminal, as viewed from Burr Street.

The runway lengthens, a new terminal and garage get built, and the name “New Haven” remains under newly released terms of a proposed 43-year lease between the city and Tweed’s airport authority.

The deal includes lifting of a weight limit on local aircraft — and the teeing up of a long-term sub-lease with a deep-pocketed private investor.

Those terms, and many more, were revealed Tuesday in a new proposed amended and restated lease and operating agreement between the city and the Tweed New Haven Airport Authority and a proposed ordinance amendment.

City officials submitted the proposed lease extension to the Board of Alders at Tuesday night’s monthly meeting.

They also submitted a related proposed ordinance amendment that would repeal a city law that prohibits airplanes that weigh more than 160,000 pounds from using Tweed.

Both proposals now advance to an aldermanic committee for a public hearing before returning to the full board for a final vote, likely in the early fall.

The proposal lease renewal and aircraft weight-limit repeal come two months to the day after local, state and federal officials held a celebratory press conference at the East Shore airport to announce that Tweed’s current private management company, the Goldman Sachs-owned Avports, has promised to invest $70 million to upgrade and expand the current airport —and to bring in new airlines along the way.

City Economic Development Administrator Michael Piscitelli described in a cover letter addressed to the Board of Alders on this matter “our shared goals for economic growth in a manner that is responsible to the surrounding community and the environment. The above-referenced communication represents a significant step towards implementation of these goals in light of the recent progress on an update to theAirport Master Plan together with new air service development and a proposed public/private partnership with the Airport’s management contractor.”

Morris Cove neighbors critical of the Tweed expansion, meanwhile, have formed a new group called 10,000 Hawks, and have promised to watch with a close eye every step of airport’s major new moves.

Click here, here, here, and here to read in full the new lease and related documents submitted by the city.

The 29-page proposed lease agreement between the city and the airport authority, as well as the half-dozen supporting documents submitted by the city to the Board of Alders, flesh out many of the details already brought up by city, state, federal and airport officials over the past two months.

Some of the key provisions of the new lease include:

The new sub-lease would allow Avports to not only operate and manage the airport, but also to “implement the updated Master Plan through a combination of on-airport revenue, new private equity and federal grants,” per Piscitelli’s cover letter.

That is, Avports will be responsible for finding the financing for and building the new terminal, garage, and longer runway—and will be able to take home the additional profits that result from that expansion.

While this proposed lease agreement is between the city and the airport authority, it nevertheless does include a wealth of details about what Avports plans to do based on its separate sub-lease with the authority.

Many of those promises are laid out in the proposed lease’s Exhibit D, dubbed “Performance Standards.”

Some of those planned Avports-led improvements include:

“Avports, on behalf of the Authority, will manage and operate the airfield facilities (runways, taxiways),” the FAQ reads. “Avports will lease the landside facilities (terminal, roadways and parking) from the Authority, and will then enter into arrangements with airlines, rental car companies, concessionaires, etc., to use the terminal facilities. Avports will have the right to collect the revenue from the Airport operations, will pay its operating and capital expenses, and will pay rent to the Authority as well as a share of revenues above certain thresholds.”

Avports will also be responsible for securing funding for the runway extension, the existing terminal renovations, the new eastside terminal, and other improvements, the FAQ states.