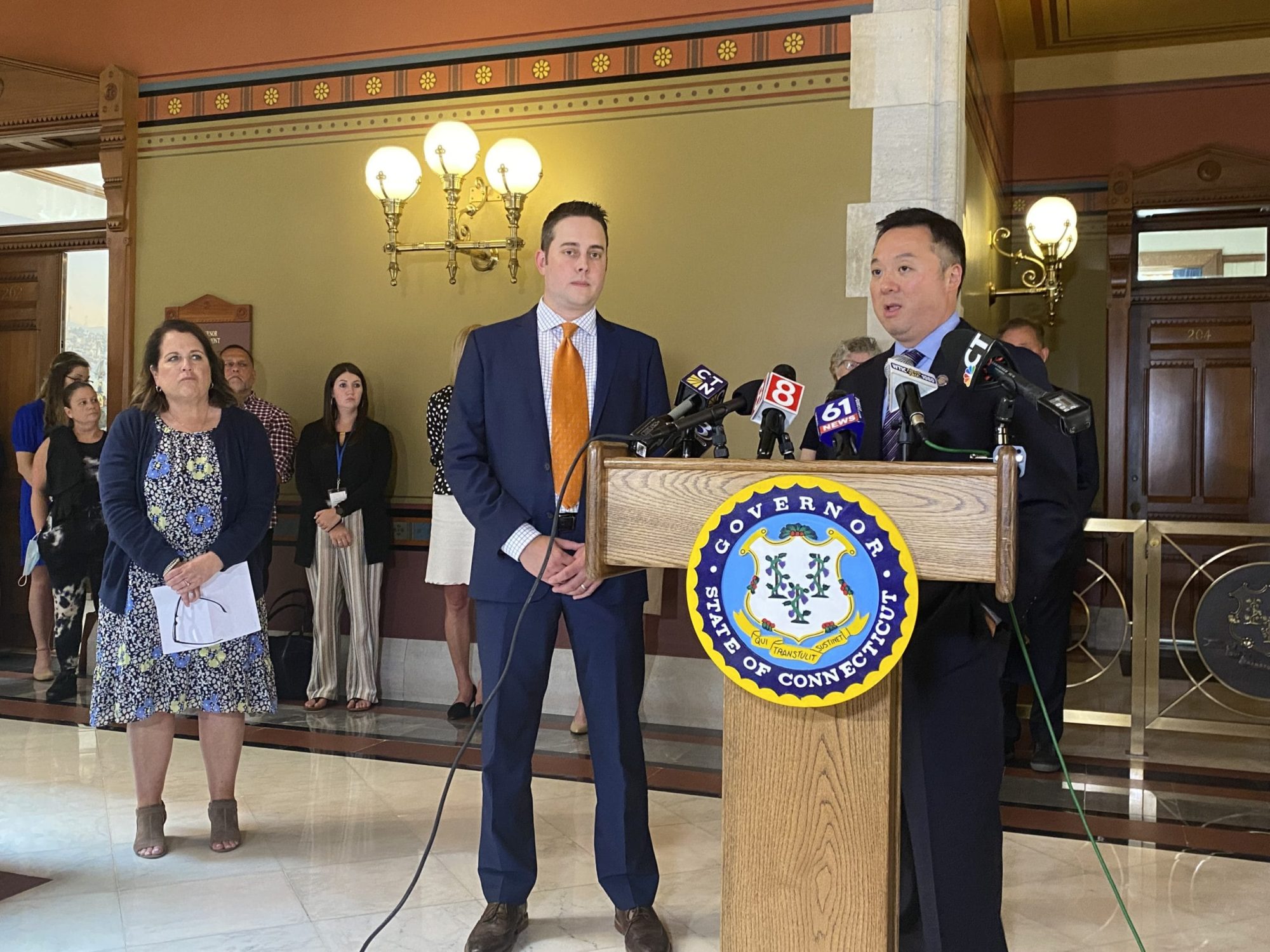 The state of Connecticut will receive more than $300 million as part of a massive legal settlement with an opioid manufacturer and several corporations that shipped billions of prescription pain pills around the country in recent decades.

The deal is part of a larger, $26 billion settlement the companies negotiated with state and local governments to limit their potential legal liability for the ongoing opioid epidemic.

Connecticut Attorney General William Tong announced the settlement at the state Capitol on Wednesday. He was joined by other state officials, including Gov. Ned Lamont, individuals who have struggled with addiction, and family members who have watched loved ones suffer from the disease.

Tong said the settlement money will be used to help stem opioid addiction, which has worsened during the coronavirus pandemic.

Connecticut will receive its share of the settlement over an 18-year period, Tong said. Fifteen percent of the settlement proceeds, or roughly $45 million, will be distributed to municipalities throughout the state, and the rest will be managed by the state, which intends to use the money to fund addiction counseling and medication assisted treatment.

The lawsuits at the center of the settlement were filed against the companies by towns, cities, counties and state attorneys general across the country. Those lawsuits alleged Johnson and Johnson and the drug wholesalers helped to feed the county’s addiction crisis.

Johnson and Johnson produced some of the highly-addictive prescription pain pills, and Amerisource, Cardinal Health and McKesson — which are three of the largest corporations in the country — were responsible for shipping those prescription drugs to pharmacies across the country.

Data from the U.S. Drug Enforcement Administration showed that between 2006 and 2014 Cardinal Health, alone, shipped more than 266 million oxycodone and hydrocodone pain pills to pharmacies in Connecticut. McKesson shipped another 182.9 million, and AmerisourceBergen shipped another 61.5 million highly-addictive opioid prescriptions.

The three drug wholesalers released a statement Wednesday saying they “strongly dispute the allegations” contained in the lawsuits. But the companies said the settlement was an “important step” in resolving the massive number of legal claims.

Treatment specialists have argued the flood of prescription pain pills into communities in past years caused many people to become addicted to opioids and led some to take up illicit drugs like heroin and fentanyl.

The increased use of illicit drugs have, in turn, caused a spike in opioid-related overdose death across the country, and Connecticut is well aware of that human toll.

Roughly 610 people in Connecticut died of an overdose tied to oxycodone or hydrocodone pills in the past six years, and so far in 2021, another 29 people were added to that grim total.

Even more have overdosed from illicit opioids, like heroin and fentanyl. Between 2015 and the first part of 2021, 6,057 people have died from those drugs.

Tong highlighted the mounting overdose death rate during the press conference, and lamented the thousands of “souls” that have been lost in Connecticut.

Maria Skinner, the Executive Director of the McCall Center for Behavioral Health, said the settlement may not provide a lot of comfort to people who have lost friends and family members to opioid addiction. But she said the money could do a lot to prevent addiction and overdoses moving forward.

Addiction treatment services in Connecticut is an “under-resourced system,” Skinner said. But an infusion of $300 million, she added, could stop the “wreckage” and “heartache.”

The state is expected to establish an Opioid Recovery & Remediation Fund Advisory Council, which will oversee the disbursement of its share of the settlement.

Lamont promised the money would be put toward treatment efforts throughout the state.

“It’s not going to be siphoned off,” Lamont said. “Our job is to make sure this money is properly invested.”

The terms of the settlement require the three distributers to collectively pay up to $21 billion over 18 years, with Johnson & Johnson — which is ordered to stop selling opioids entirely — responsible for $5 billion over nine years.

In addition, the agreement also requires Cardinal, McKesson, and AmerisourceBergen to establish a centralized independent clearinghouse to provide all three distributors and state regulators with aggregated data and analytics about where drugs are going and how often, eliminating blind spots in the current systems used by distributors; use data analysis to detect suspicious opioid orders from pharmacies; terminate the ability of pharmacies to receive shipments, and report those companies to state regulators, when necessary; prohibit shipping of and report suspicious opioid orders; prohibit sales staff from influencing decisions related to identifying suspicious opioid orders; and require senior corporate officials to engage in regular oversight of anti-diversion efforts.

Connecticut’s share of the settlement was determined by a formula that assessed the impact of the opioid crisis on the state, taking into account the number of overdose deaths, the number of residents with substance use disorder, the number of opioids prescribed, and the population of the state.

Andrew Brown joined CT Mirror as an investigative reporter in July 2021. In the ten years before joining CT Mirror Brown was a reporter at newspapers in North Dakota, West Virginia and most recently South Carolina. He’s covered business, environmental issues, local governments and state legislatures. Have a story tip? Reach him at 843-592-9958