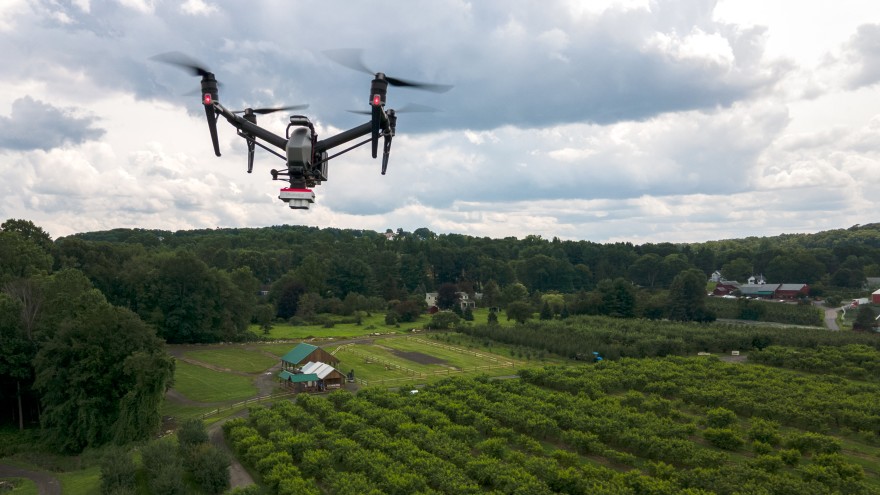 A drone gains elevation before collecting imagery at the Belltown Hill Orchards in South Glastonbury. The images will be used to study the health of the crops.

On a farm in South Glastonbury, a tractor idles. It’s one of the most iconic farming inventions of the late 19th century, a tool that was invented shortly before Donald Preli’s grandfather came from Italy and started Belltown Hill Orchards.

“We only can see as we’re looking down a row,” Preli said. “This is flying over top …“It’s going to see trouble areas a lot quicker than we will.”

Drone technology could be a new frontier for farmers looking to keep a watchful eye on the health of their crops by providing updates on plant health and saving farmers valuable time.

“With the drone technology, we’re hoping that they can fly pretty much the whole farm in a couple hours,” Preli said. “Report back on my cell phone, I’ll look at it in the evening, and make adjustments the following day.”

And while a ping on a farmer’s cell phone is the end goal, drone technology still isn’t quite there yet.

By a field of honey crisp apples, Nancy Marek, a Ph.D. student at UConn, tinkered with a drone before getting it ready to launch.

“Oops. See? There’s a mission error,” Marek said while gesturing to what she described with a laugh as a “finicky” device. “We’re just gonna turn it off and turn it back on again.” 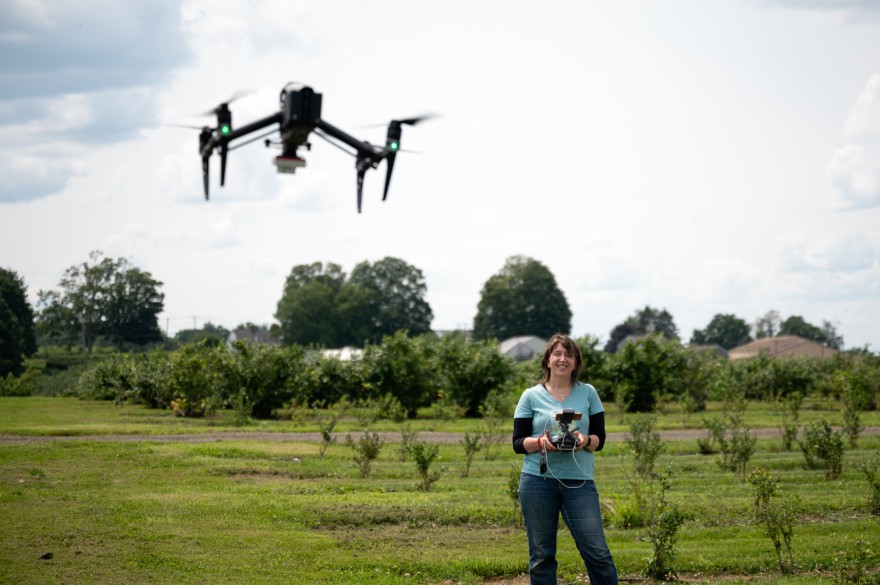 With the drone rebooted and ready, Marek punched in a few inputs and the machine soared skyward.

It flew at about 160 feet, preloaded with a flight path by the UConn team. We looked up as the drone passed above the apples, and us, all the while, snapping hundreds of pictures of the crops.

But these aren’t your typical photos.

“Including blue, green, red, near infrared and other bands,” Witharana said. “Those channels tell us, or probe into, the biophysical characteristics of the crop.”

But the trick is making sense of it.

“Anyone can deploy a drone. Acquire data. The real challenge is creating insights from the data,” Witharana said.

To get those insights, researchers today are taking samples from the plants.

As he walked down a row of grapes, Evan Lentz, a second-year master’s degree student at UConn, picked leaves and stuffed them into a baggie.

He’ll send the leaves to a lab, which will look for nutrients like nitrogen, phosphorus, and potassium, to name just a few.

“Basically, we’re getting this massive amount of data about what’s going on in the plant and then eventually we try to tie that to the images from the drone,” Lentz said. 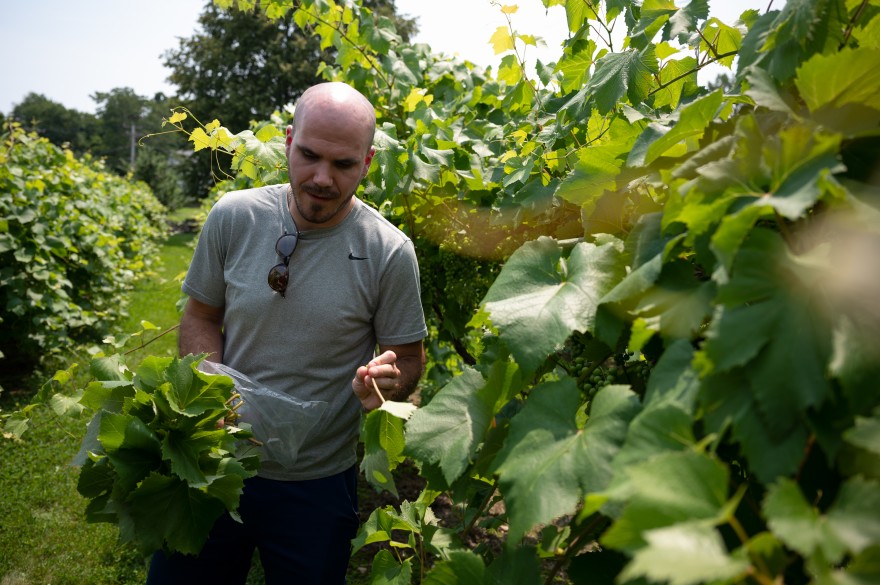 Evan Lentz, a graduate student in UConn’s plant science department, collects samples from grape leaves at Belltown Hill Orchards to study in conjunction with drone imagery that his team will use to determine the plant’s health.

“The drone’s not really telling us anything other than it’s this color or I am capturing this wavelength,” Lentz said. “Then it’s up to me to sort through the field data from the tissue sample results and look for a relationship.”

Lentz said there’s still a lot he needs to learn about that relationship. But if the idea pays off and researchers develop a model to spot plant problems from the sky, he said it could reduce a lot of risks for farmers when it comes to “the cost of testing, crop loss, decreased yield, disease,” Lentz said. “There’s some pretty large possible impacts if we do get this up and running for farmers.”

Donald Preli, who let UConn use his South Glastonbury farm to test out the drone idea, said he’s excited by what the future holds for drones keeping a watchful eye on his crops.

“We’d love to own a drone that could do multiple tasks,” Preli said. “Where we don’t have to go out personally and do it. We can just send a drone, program it to do a certain row or a certain block. And when it comes back home, we know it’s been done.”

Because on a 200 acre farm, Preli said, it all comes down to humans and using their time most efficiently, possibly, with the help of a drone.