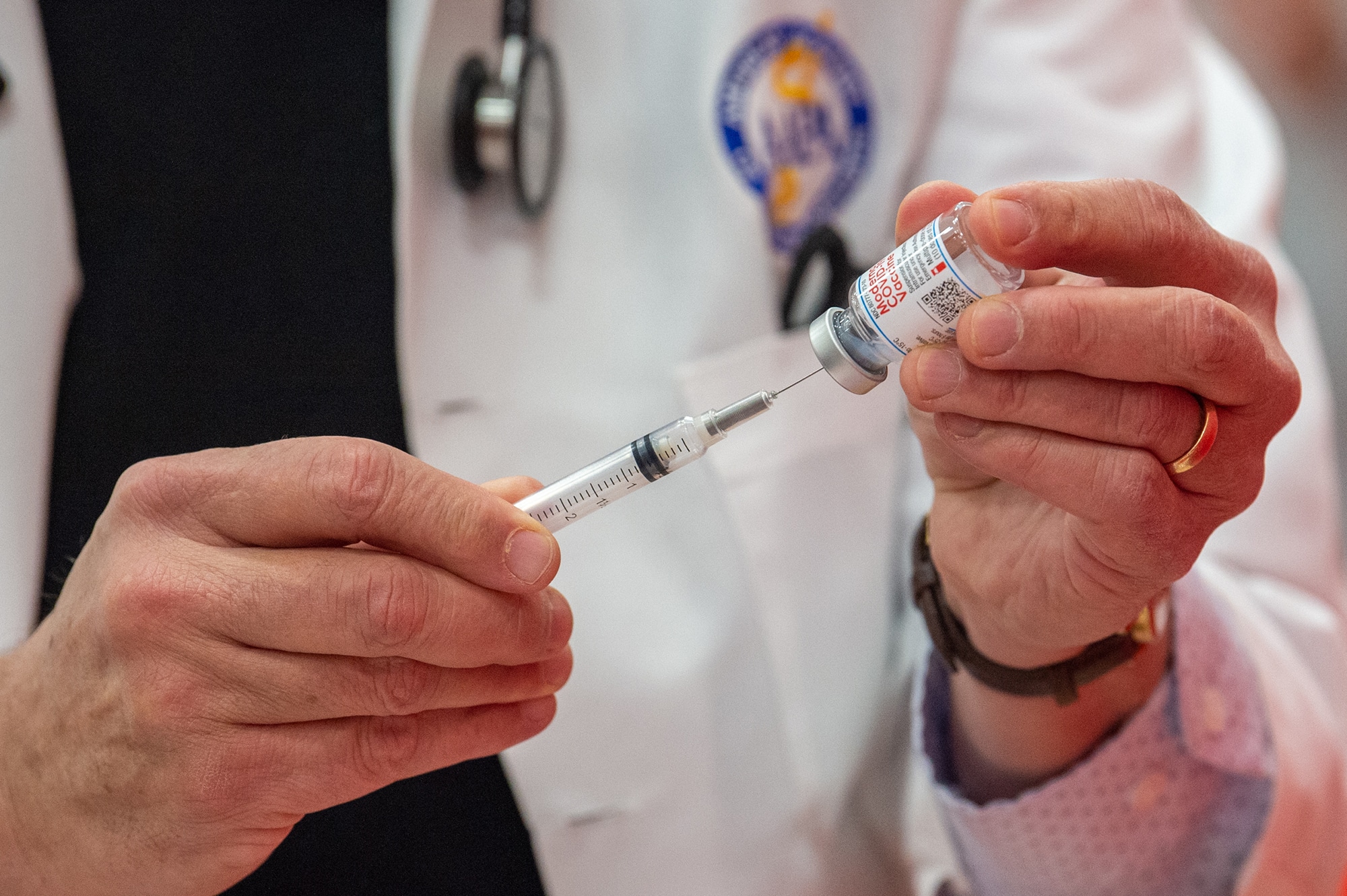 Some leaders in the home care sector are hoping Gov. Ned Lamont will impose vaccine mandate for staff in the industry.

As a 29-year-old living with a form of muscular dystrophy, Will Hermann relies on the two personal care assistants who spend a combined 75 hours each week with him.

The home care workers are both fully vaccinated against COVID-19, a comfort to Hermann, who has also been immunized but is unable to wear a mask.

“It’s very important, because I don’t want to catch it,” he said. “I have overall muscle weakness, and it does affect my breathing. I have certain breathing machines that I use, so I am concerned about the respiratory symptoms of COVID.”

There currently is no statewide requirement that home care employees get vaccinated, however. And with thousands of people dependent on those workers – including many elderly residents and people with disabilities – not everyone is in the same boat as Hermann.

“It’s hard to hire people. So some people might end up stuck with people who don’t want to get vaccinated and there’s no alternative,” Hermann, a Suffeld resident, said. “I didn’t have to ask [my aides], everyone chose to do it on their own. But I know that some people probably are not that lucky.”

Some leaders in the home care sector are hoping Gov. Ned Lamont will impose a vaccine mandate for staff across the industry. Lamont has ordered that workers in nursing homes, assisted living centers, residential care homes, chronic disease hospitals, intermediate care facilities and managed residential communities be immunized against the coronavirus by Sept. 7, but he left the home care workers out of that requirement.

A spokesman for Lamont said there are no immediate plans to expand the edict to include home care employees, but the governor has not ruled it out.

“The initial order was focused on the highest-risk congregate facilities. As we’ve seen throughout the pandemic, nursing homes had the potential to really get out of control in spots, or, if not out of control, to see a sustained increase” in cases, said Lamont’s spokesman, Max Reiss. “That was the justification. It doesn’t mean it won’t happen down the line … but as of now, home care workers are not in the scope.”

But as the Delta variant spreads, driving up cases and hospitalizations, people who rely on home care are increasingly concerned about whether the workers are inoculated.

“Several agencies have shared with me that their patients requested a vaccinated-only staff member,” said Tracy Wodatch, president and CEO of the Connecticut Association for Healthcare at Home, which represents 54 home care organizations. “That can be a bit cumbersome, because you only have so many staff and some are not vaccinated. They are still wearing appropriate [protective gear]. But family members are saying, ‘No, only if you’re vaccinated, you can come in.’”

Home care agencies can implement their own mandates, and some have. Others are using incentives to entice workers to get the shot.

But not all home care employees work for an agency. There are about 24,000 self-directed, unionized personal care assistants in the state, industry officials estimated. Those workers help people with bathing, dressing, grooming and other tasks.

And there are still dozens of agencies that have not yet required employees to get the vaccine. The industry is facing a shortage of workers, complicating the decision of whether to impose a mandate.

In addition to the personal care aides, the home care sector includes workers who provide medical assistance (licensed by the public health department and certified by Medicare) and those that offer companionship and homemaker services. Some employees provide hospice care.

About 15% to 20% of the agencies Wodatch represents have ordered their staff to get the shot.

“I have several members who are asking for” a statewide mandate, she said, “but I also have others who are a little tentative about it.”

Lamont’s requirement for nursing home workers, assisted living center employees and others goes into effect on Tuesday. That has also fueled concerns that staff who do not want to be vaccinated may flock to the home care sector, where there is no such edict.

“Our agencies are seeing an uptick in applications coming from the facilities that have the vaccine mandate, from those who don’t want to get vaccinated,” Wodatch said. “It’s very concerning to our members.

“I would say a large majority of them are in favor of a vaccine mandate by the governor.”

Home care agencies that have not yet adopted a requirement are trying to drive up vaccination rates by dangling cash prizes and other incentives. Assisted Living Services, Inc., which employs more than 250 caregivers, this week announced that five vaccinated workers would be awarded $1,000 in a random drawing on Oct. 12.

While many of the employees are already vaccinated (some work in both home care and assisted living facilities), Mario D’Aquila, the company’s chief operating officer, said, “we know that we can do better and we know that the home care industry can do better.”

“Our industry does not have a mandate for vaccinations. However, we strongly encourage and promote vaccinations for all of our staff members,” he said.“This is not a gimmick. We’re serious about our employees’ health and we have confidence in vaccines.”

Leaders in the nursing home sector also support a mandate for home care workers. Facing their own staffing crisis, they are worried about losing employees to home care jobs.

“There’s an argument that there will be a migration, that vaccine hesitant staff will migrate to parts of the health care sector that don’t have a requirement,” said Matthew Barrett, president and CEO of the Connecticut Association of Health Care Facilities, which represents 145 of the state’s 211 nursing homes. “We think it’s a real concern.”

Union leaders say that, so far, they have not observed an industry shift. Many union positions in nursing homes come with steady hours and benefits, including sick days. The same is not true for union home care jobs, which generally pay by the hour and don’t provide paid time off.

Officials with New England Health Care Employees, District 1199 SEIU, which represents about 10,000 home care workers in Connecticut, did not take a position on whether there should be a vaccine mandate. But they said that adding a requirement without outreach and education could cause a shortage of employees.

Taking time off work to get the vaccine or to deal with side effects is also a challenge, along with access issues.

“These workers are mostly Black and brown women. Many of them are head of households. They have children, and they work multiple shifts because the wages are so low,” said Pedro Zayas, a spokesman for 1199. “They often have transportation limitations, especially home care workers who are the poorest in terms of making the lowest wages. Sometimes they depend on public transportation, and some of these workers do not have primary care physicians because they don’t have routine health insurance.”

Lamont isn’t the only one who left home care staff out of vaccine mandates. Last month, President Joe Biden said he would order nursing home workers to be inoculated against coronavirus as a requirement of those facilities continuing to get Medicare and Medicaid payments. Home care staff were not included in the announcement.

But some public officials are changing their minds. On Wednesday, a month after Massachusetts Gov. Charlie Baker ordered skilled nursing home staff to be vaccinated, he expanded the mandate to include as many as 100,000 home care employees. The plan must still be approved by the state’s Public Health Council.

“The plan to expand the vaccine requirement for caregivers … is part of the administration’s continued effort to protect older adults against COVID-19,” officials with the Executive Office of Health and Human Services said. “Home care workers will be required to receive the COVID-19 vaccination by October 31, 2021 unless they qualify for a limited exemption.”