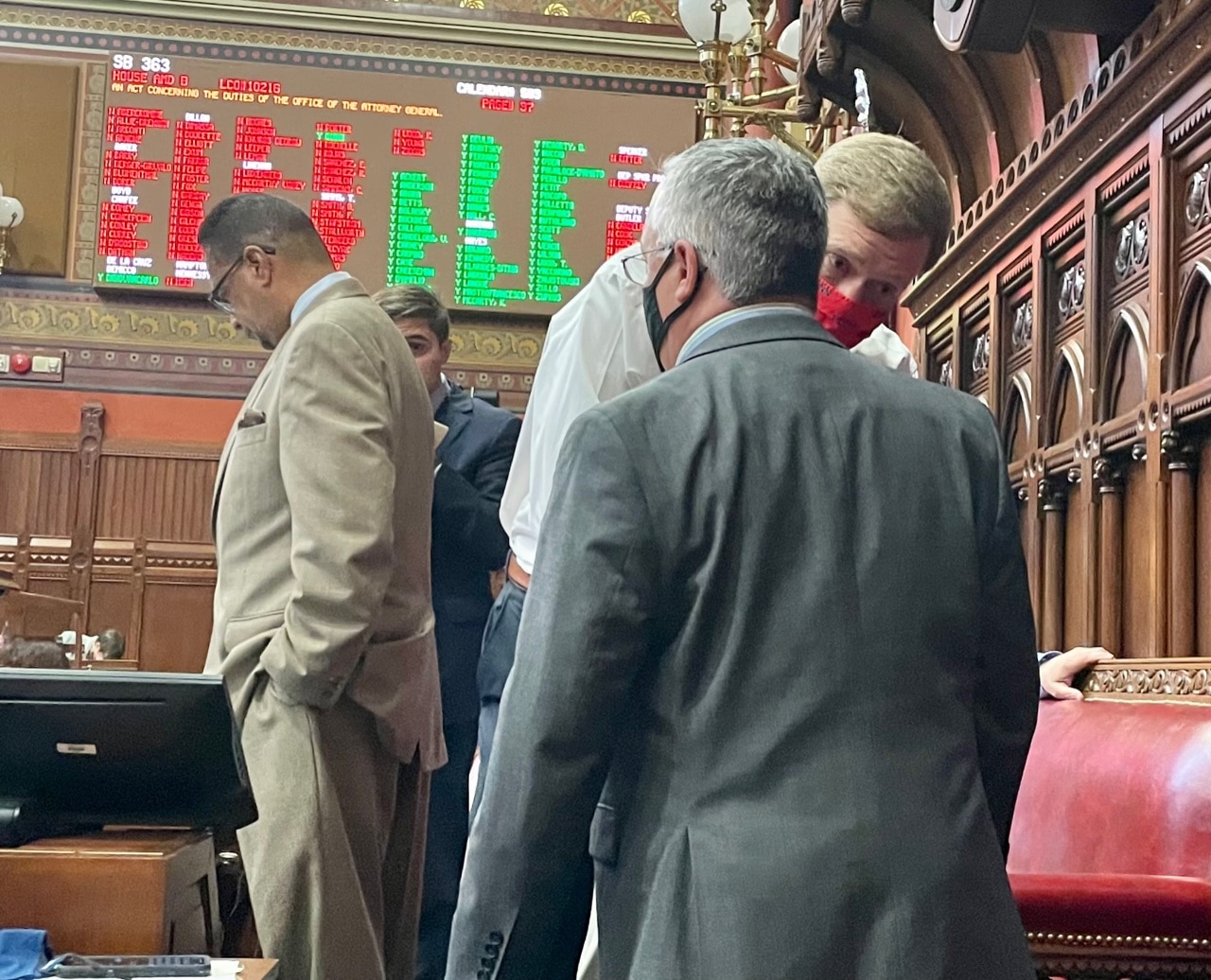 Connecticut’s legislative reapportionment process goes public this week, testing whether the availability of open data and mapping tools can bring public participation to a process long controlled by political insiders.

Calculating the appropriate population levels of congressional and General Assembly districts is easy. But adjusting district lines, a task belatedly begun with the arrival of granular data from the pandemic-delayed 2020 Census, comes with the complexity of a Rubik’s Cube.

Redistricting traditionally has been conducted out of the public eye, brokered by Democratic and Republican legislative caucus leaders sensitive to the wants and needs of incumbents — namely, district maps that will enhance chances for re-election, not invite competition.

The availability of free, online mapping tools preloaded with census and elections data mean that for the first time, anyone can propose their own districts and submit them to the legislature’s Reapportionment Committee. It also means the maps can be readily assessed for whether they have a partisan skew or racial impact.

“I really think we should welcome that level of input,” said Rep. Gregg Haddad, D-Mansfield, the co-chair of the Reapportionment Committee.

Senate Minority Leader Kevin Kelly, R-Stratford, the other co-chair, said the mapping available on the web sites is an opportunity for anyone who ever thought they could do a better job than lawmakers.

“The flip side is people will see the complexity of the challenge,” he said.

The first of four public hearings on reapportionment is 7 p.m. Wednesday at the Legislative Office Building in Hartford, followed one at 1 p.m. Thursday at Norwich City Hall. Two others are planned for next week, the final one to be conducted via Zoom.

But there will be no proposed maps on which to comment — not unless they are offered by the public.

The Reapportionment Committee has met only twice, once to organize in April and again Friday to schedule the public hearings. It will not produce a map before reaching its constitutional deadline of Sept. 15 and disbanding, giving way to a backup commission of eight lawmakers who must elect a ninth member.

Had the committee produced maps for the U.S. House, state Senate and state House districts, they would have been submitted to the full General Assembly for approval, which requires a two-thirds supermajority. Whatever the nine-member commission produces will not be subject to a legislative vote.

If the commission fails to agree on new districts by Nov. 30,  the task falls to the Connecticut Supreme Court. Ten years ago, the commission agreed on state legislative districts, but the congressional map was finalized by the court.

Public hearings are next week and the following week.

Connecticut’s overall population barely changed from 2010 to 2020, adding just 31,847 people to a state of 3.6 million. That’s an increase of nine-tenths of 1%, the smallest in any of the 47 states that grew over the past decade.

But the population was hardly static. For example, Stamford grew and Hartford shrank, a likely gain of political clout for one and loss for the other. One congressional district needs to get bigger, another more compact.

“This is a very difficult process, and there’s going to be winners and losers,” said House Speaker Matt Ritter, D-Hartford.

Hartford, alone among the state’s five largest cities in losing population, now sends six representatives to the state House of Representatives. It will be a challenge to draw new districts that can elect more than five.

On a congressional level, losses in eastern Connecticut and gains in Fairfield County mean that Congressman Joe Courtney’s sprawling 2nd District must get even bigger, while Congressman Jim Himes’ 4th will get more compact.

“There’s going to be an obvious need to make changes to the congressional maps to a degree that I don’t think we saw 10 years ago,” said House Minority Leader Vincent J. Candelora, R-North Branford.

Drawing the maps is a legislative function in Connecticut, but the Democrats’ domination of the General Assembly is no advantage. By constitution, the legislature’s Reapportionment Committee is evenly split, four Democrats and four Republicans. Not surprisingly, the maps generally are seen as fair to both parties.

Plan Score, a national non-profit that assesses the fairness of legislative maps, says their metrics “do not consistently indicate a skew in either party’s favor” in the General Assembly districts. It offers no opinion on congressional maps in states with fewer than 7 seats.

The commission that will succeed the committee is expected to be composed of the top two leaders of each of the four legislative caucuses.

“You have to do it, I think, at the top leadership level,” Ritter said. “Probably nothing is more important for your caucus members and their districts than what they look like.”

Candelora, Kelly and their deputies, Rep. Jason Perillo, R-Shelton, and Sen. Paul Formica, R-East Lyme, are on the Reapportionment Committee and will serve on the commission.

Ritter and House Majority Leader Jason Rojas, D-East Hartford, will serve on the commission. Senate President Pro Tem Martin M. Looney, D-New Haven, declined to say if he and Senate Majority Leader Bob Duff, D-Norwalk, will represent the Senate Democrats until he consults with the caucus.

Redistricting in Connecticut begins with three simple calculations: Dividing the population of 3,605,944 by 5, 36 and 151. Those are the number of congressional, state Senate and state House districts.

There will be an adjustment in the data by the state Office of Policy and Management due to a state law that apportions Connecticut’s prison population to their home communities for the purpose of drawing district lines.

“That’s the last piece of the data puzzle,” Kelly said.

Redistricting is a zero sum puzzle, where changes to one district ripple across others.

Nearly 40% of the overall population growth came in Stamford, the state’s second largest city with a population of 135,470. As a result, the districts represented by  Rep. David Michel and Sen. Patricia Billie Miller, both Democrats of Stamford,  must become more compact.

Michel’s 146th House District now has a population of 32,900, the greatest imbalance of any district in the General Assembly.

Stamford’s population growth will add to the city’s case for a second state Senate seat. By combining portions of Bridgeport, New Haven and Hartford with suburbs, those cities now elect two state senators each. Stamford is larger than New Haven and Hartford, but it is home to only one senator.

Geography is not on Stamford’s side. Bordered by Long Island Sound on one side and New York on the other, there is little flexibility drawing Senate districts around Stamford. The portion of Stamford not represented by Miller is in a district dominated by Greenwich voters, and that seat recently was recaptured by Republicans in a special election. 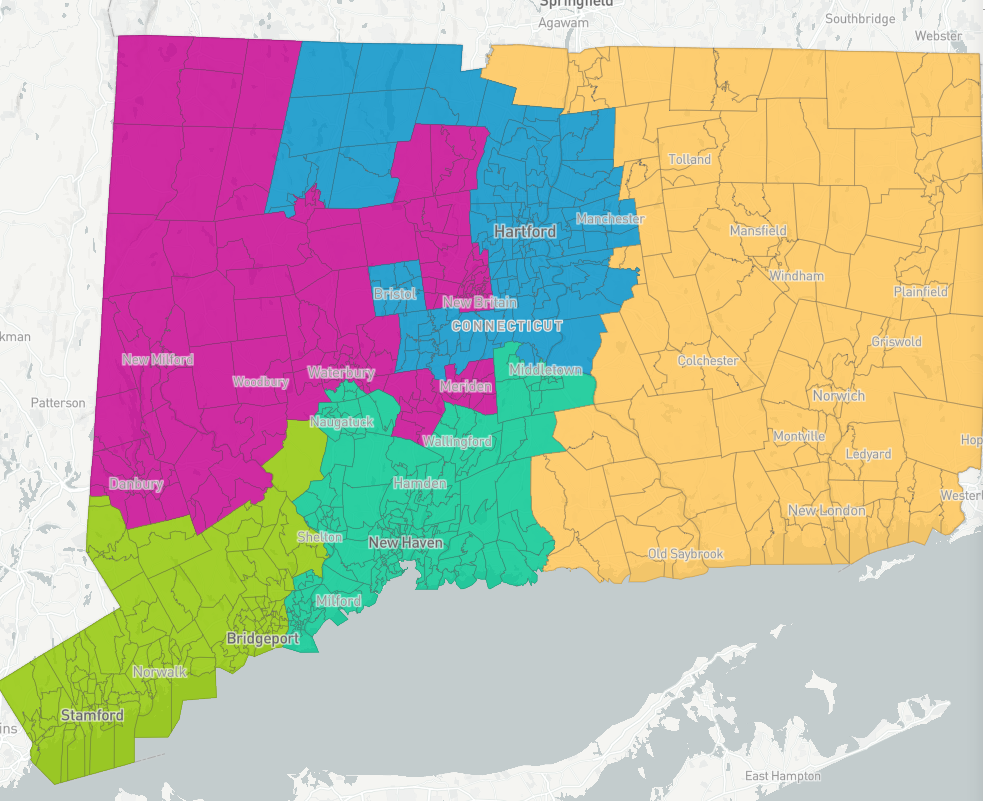 The odd shape of the 5th Congressional District (in purple) is the consequence of Connecticut losing a seat after the 2000 census, resulting in two incumbents ending up in the 5th. It was drawn to set up a fair fight. The 2nd (in yellow) is underpopulated and must grow.

Connecticut’s congressional map has its own challenges.

Three of the five districts make geographic sense, but the 5th District of western Connecticut resembles a creature that’s invaded the 1st District of Greater Hartford, reaching through the Farmington Valley to the border of West Hartford.

The border is the consequence of Connecticut losing a U.S. House seat after the 2000 Census. It was drawn to serve the interests of two incumbents placed in the 5th: Democrat James Maloney of Danbury and Republican Nancy Johnson of New Britain. It was drawn to offer a level playing field and remains competitive.

“I think that most people would agree that those districts are a little bit weird,” Candelora said “We know historically why they came to be. To the extent that we can make districts more representative with connectivity that makes sense, I think we should try to do that.”

Haddad warns that any partisan advantages offered by revisions in the maps may be fleeting.

He notes that three of the five congressional seats were won by Republicans in 2002 and 2004. Courtney and Chris Murphy unseated Republicans in 2006 in the 2nd and 5th, which remain the most competitive by several measures. Himes unseated a Republican in 2008 in the 4th, a former GOP redoubt that now leans Democratic.

Ten years ago, the Republicans proposed a map that was a non-starter: It made the 5th District border more rational, but it also would have moved Democratic Bridgeport, the state’s largest city, from the 4th to the 3rd — making the 4th ripe for a GOP comeback. The court rejected it.

Ritter said the goal this year is for the commission to complete all three maps without court intervention.

“I don’t think anybody feels that we should ever kick this authority to a judicial branch,” Ritter said. “It’s our job to do it, and I think we anticipate doing it, and doing it on time.”