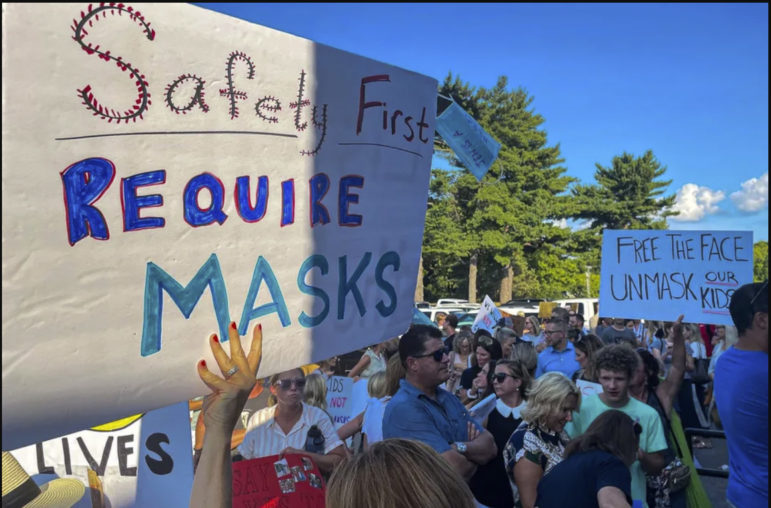 Communities across the country are debating whether to require masks in schools.

In his first several months in office, Education Secretary Miguel Cardona had largely steered clear from controversy. But recently he’s waded directly into a debate roiling school boards and state houses across the country: whether schools should require all students and staff to wear masks.

“We cannot sit around,” he said last month, as the Biden administration pushed back against states banning school mask mandates. “We have to do everything in our power, including civil rights investigations.”

Soon after, he announced investigations into five states — Iowa, Oklahoma, South Carolina, Tennessee, and Utah — saying they may be violating the rights of students with disabilities.

Republicans blasted the move as federal meddling. “It is inappropriate for the Office for Civil Rights to spend taxpayer dollars to intimidate states that are responsive to parents’ needs and balance freedom with public health,” said Rep. Virginia Foxx, the ranking Republican on the House education committee. “Biden and his cronies are using the Department of Education as a propaganda tool against states and governors that disagree with them.”

The partisan breakdown is clear. What’s less clear is whether the department’s effort to encourage masking is on strong legal ground and whether it’s likely to succeed in changing state policies. So Chalkbeat asked a number of lawyers and legal experts.

Here’s what we found: The feds have some legal basis, but they also face a number of legal, political, and practical hurdles in stopping states from banning masking requirements. However, the department’s actions may bolster lawsuits from parents and advocates advancing similar claims — which, if persuasive to federal judges, could quickly halt state mandate bans.

The department’s argument: Bans on universal masking keep kids with disabilities out of school.

Barring mask requirements could effectively limit access to school for some students who have medical conditions that put them at greater risk of getting severely ill from COVID, the feds argue. They point to a number of parents of children with disabilities who say they feel forced to choose between an in-person education and their health.

That, the Biden administration claims, could violate those students’ right to a “free appropriate public education” and amounts to illegal discrimination under federal law.

In opening an investigation, the feds have not made a determination of any such discrimination and they have promised to be a “neutral factfinder.” But Cardona has made clear where his sympathies lie. “This Department will continue to use every tool in our toolbox to protect the health and safety of students,” he wrote in a blog criticizing states that bar masks requirements.

A number of lawyers and legal scholars say the department has a decent legal case.

“It is a viable claim, for sure,” said Joshua Weishart, a law professor at West Virginia University. “Even if that were not the purpose of statewide bans on mask mandates, federal law prohibits administering policies in ways that have the effect of excluding students with disabilities.”

“I think that it is a very reasonable way to protect children’s health,” said Julie Underwood, an expert on education law at the University of Wisconsin-Madison.

“Any kind of ban on the masking that would preclude children with disabilities from being able to attend school because it would be dangerous for them if they were to catch COVID impedes their right to access education,” said Selene Almazan, legal director at the Council of Parent Attorneys and Advocates, which advocates for students with disabilities.

The arguments on the other side

Other legal scholars are more skeptical of the Biden’s administration’s claims. “I don’t think their legal position is terribly strong,” said Joshua Dunn, a professor at the University of Colorado Colorado Springs who regularly writes about education law issues.

Indeed, there are a number of arguments that critics of the department’s position might raise.

For one, some students with disabilities might find it difficult or impossible to wear a mask throughout the school day — that creates a challenge if some students with disabilities need universal masking but others need exemptions. “It wouldn’t be surprising to find another group of parents saying, ‘for my child these mask mandates are particularly harmful and in violation of their IEP,” said Dunn, referring to individual education programs, which spell out accommodations for disabilities.

Dustin Rynders, an attorney at Disability Rights Texas, which sued the state over its ban on mask mandates, says those tensions aren’t irreconcilable and that his organization has supported various masking accommodations for students with disabilities. He added, “If you have a child who truly can’t wear a mask, it makes it all the more important that everyone who can does.”

A number of polls shows that more parents support mask mandates than oppose them, although there is little if any data specifically on the view of parents of students with disabilities.

Skeptics of masking in schools also claim that the evidence doesn’t support the practice, and therefore shouldn’t be legally required. Florida Gov. Ron DeSantis, for instance, cited a recent New York Magazine article, which questioned the prevailing recommendations of universal school masking from the Centers for Disease Control and Prevention and the American Academy of Pediatrics. (There is little empirical evidence about the effects of masks in schools, but there is stronger evidence outside of school settings, which some experts say likely apply in schools too.)

A final potential weakness of the department’s argument is that it would effectively require universal masking in all districts across the country. “If it is your position that students with disabilities are entitled under Section 504 to be educated in schools in which everyone is wearing a mask, does this policy apply to all school districts?” Republican members of the House education committee wrote in a pointed letter to Cardona.

The Biden administration isn’t going that far, though, perhaps because that could create a massive political backlash.

Kelly Leon, a spokesperson for the Department of Education, emphasized the value of local decision-making. “Statewide bans make it impossible for schools and school districts to make local, on-the-ground assessments of the needs of their school and students,” she said.

Aside from the legal issues at play, experts and advocates say there is another major hurdle that the department faces in pushing states to rescind masking requirements: time.

“Interviews, reviewing facts and statements, drafting a decision, determining corrective action, and clearing internally are lengthy processes at the best of times and [the department] will want to be thorough here,” said Julia Martin, an education lawyer who advises states and districts. Federal investigations sometimes take months or longer.

States also have the right to appeal any investigatory finding made by the department.

But as the school year unfolds, time is of the essence for advocates and parents who say mask mandates are needed to protect students with disabilities. It’s not clear that the feds will be able to intervene in time to make a meaningful impact.

Leon said the department “will begin collecting data from each state … in a timely manner while ensuring the process is done thoroughly.”

The other challenge is how to enforce a decision. The feds’ chief leverage is the ability to cut off federal funds to recalcitrant states. But this would be an extreme and unprecedented move that the department would be reluctant to undertake. Typically, the department reaches some resolution with a state. But with the politics so fraught, such a resolution might be unusually difficult.

“Ultimately federal agencies have the power of the purse,” said Rynders. “The hard part there is: are you ultimately willing to cut off funds to a state to enforce your priorities?”

Private lawsuits may offer a clearer and swifter path

Critics of mask mandates bans don’t just have to rely on the Biden administration, though. In fact, parents have filed lawsuits in a number of states — Iowa, Florida, South Carolina, Tennessee, and Utah — advancing a similar legal theory as the Department of Education.

They may be able to get results quicker. In Tennessee, parents have already won a temporary restraining order against the state’s mandate ban. “Plaintiffs have identified ways that they have been excluded from participating in school programs and activities, including from physical education classes, and socializing with their peers when within the school buildings and at lunch,” wrote federal district court judge Sheryl Lipman.

Shep Melnick, a professor at Boston College, said the federal investigations could help existing private lawsuits and encourage others. “A lot of these investigations are aimed at imposing various costs on states and school districts and publicizing the issue,” he said. “There is a symbiotic relationship between the investigation” and the lawsuits.

In Iowa, a lawsuit filed by the American Civil Liberties Union on behalf of 11 parents cites the department’s investigation as evidence against the state’s mask mandate ban.

“We view the Department of Education investigation as being congruent with our lawsuit, as are the other similar lawsuits that have been filed around the country,” said Veronica Fowler, spokesperson for the ACLU of Iowa. “This is a very clear disability discrimination situation.”

Leon said the department does not comment on pending litigation but that officials are “closely monitoring” existing lawsuits around masking.

In Texas, the lawsuit from parents of students with disabilities goes to trial in early October.

“I think the lawsuits are, of course, what tends to have a more impactful difference,” said Rynders, whose organization is bringing the suit. “But I welcome [the department] to use their platform and their soapbox to communicate what is right for students with disabilities.”