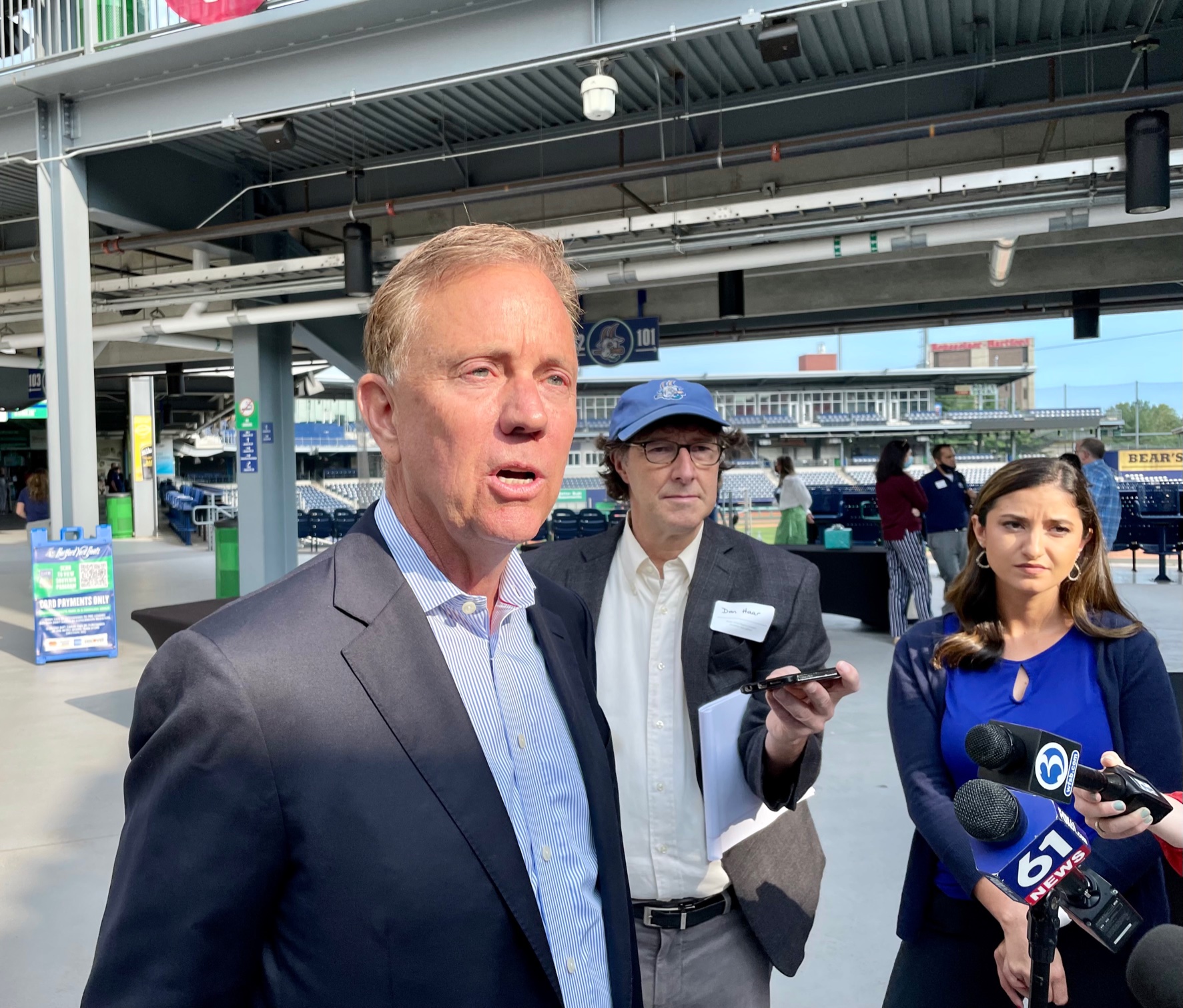 Gov. Ned Lamont said Tuesday morning he expects to extend his COVID-19 emergency declaration for at least 90 days, a necessary step in his view to maintain key mandates, including a statewide requirement for wearing masks in schools and for educators and health-care workers to be vaccinated.

Under the provisions of a law passed in July, when legislators endorsed an extension of his emergency powers until Sept. 30, the six top leaders of the General Assembly will have the authority to reject any of the governor’s executive orders, a review Lamont welcomed.

“What I want is legislative input on the executive orders,” Lamont told reporters after remarks to the MetroHartford Alliance  business association at Dunkin’ Donuts Park. “I like to know where they stand. I like to have their fingerprints on some decisions. When we work together, we’re a lot stronger.”

Lamont’s chief of staff and general counsel will brief legislative leaders on the administration’s view of the current threat posed by the pandemic, as well as the executive orders it considers vital to continue. The briefing was to be conducted by Zoom.

“We’re going to provide an overview of the executive orders that are in place and have, I would say, a very thorough conversation about what the next steps should be come Sept. 30,” said Paul Mounds, chief of staff.

His staff later said the governor most likely would extend the emergency by 120 days, covering the period until the General Assembly convenes in February.

In interviews Monday, no one suggested that the General Assembly will block Lamont from continuing his mandate of mask wearing in schools or vaccinations for state employees and workers in schools, day care, nursing homes and other long-term care facilities.

But leaders of the Democratic majorities and Republican minorities are divided over whether the threat posed by the current level of COVID infections justifies a continued state of emergency. On Monday, the state reported 1,348 new infections since Friday. Of 327 persons hospitalized with COVID, 72.2% were not fully vaccinated.

House Speaker Matt Ritter, D-Hartford, said Democrats are trying to set reasonable expectations about a pandemic that is largely under control in Connecticut but must be carefully managed over a period of months, not weeks.

“To me, how you do it is the debate,” Ritter said. “But if the argument is whether or not we’re going to be living through COVID-19 for the next four to five months, the answer is undoubtedly yes, and we have to have policies that accompany that.”

Mounds, and leaders of the Democratic majorities that control the General Assembly, said that there is an 18-month track record on which to judge the Democratic governor’s exercise of emergency powers.

“This governor, this administration has utilized the power to provide executive orders for the benefits of the safety of people during COVID-19, with a very cautious, judicial and careful manner,” Mounds said. “That’s not going to change after September 30.”

Senate President Pro Tem Martin M. Looney, D-New Haven, and Senate Majority Leader Bob Duff, D-Norwalk, said they hope the governor seeks an extension of the emergency, with Duff calling for an extension until the next legislative session in February.

House Minority Leader Vincent J. Candelora, R-North Branford, said the governor has not abused those significant powers, but the time has come for a more conventional legislative approach —holding hearings, then debating and voting.

“I think because these edicts come down without any type of public hearing or discourse, they don’t get the scrutiny that they should be getting,” Candelora said. “And so, I would hope that the administration would want that level of scrutiny, not so that the public can come out and rally for or against these issues, but that they’re properly scrutinized.”

Candelora is not opposed to a mask mandate for students in K-12, but he questions whether the impact on younger children in pre-school, who still are acquiring language skills, outweighs the benefits. He said that would be an appropriate topic for a public hearing.

Senate Minority Leader Kevin Kelly, R-Stratford, and his deputy, Sen. Paul Formica, R-East Lyme, questioned the need for another extension, noting that hospitals in Connecticut were not overburdened with COVID cases and the positivity rate of new test are below 3%.

“I don’t think we’re in that crisis that we once were,” Kelly said. “I’m not trying to diminish what COVID means. I think it’s still something that needs to be taken seriously.”

Formica said he does not believe the school mask requirement is onerous to children, but it could reasonably be left to local school and health officials, perhaps with state-mandated metrics about infection rates to guide them.

Candelora and Formica said that President Joe Biden’s announcement that he will seek to force large employers to either require vaccinations or regular testing has aggravated sensitivity to governmental powers. 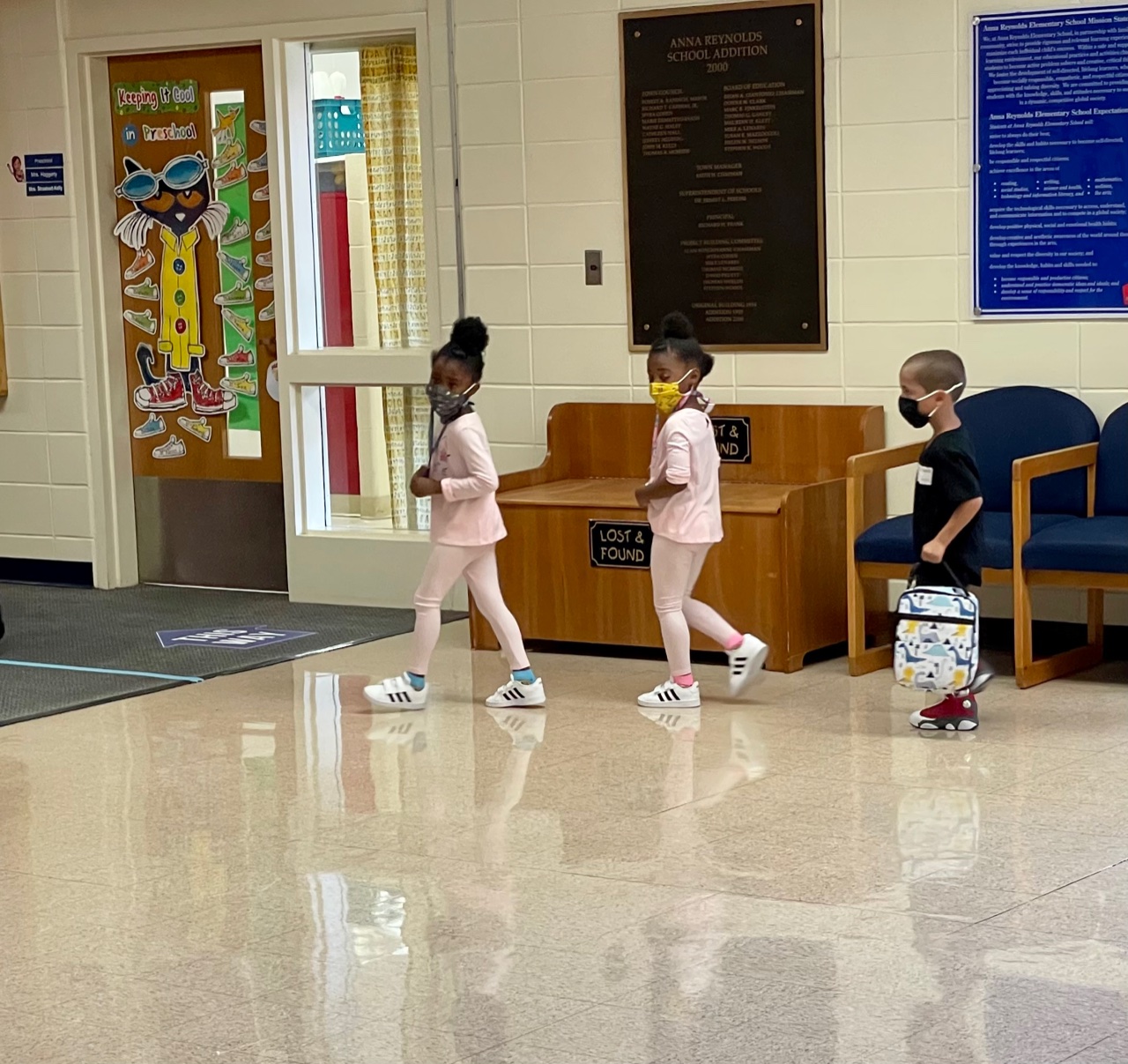 Students wearing masks recently at a Newington school visited by the governor.

Looney and Duff said in separate interviews they found it noteworthy that the legislative argument against an extension revolved around process and precedent, not the governor’s actual orders.

“They can only argue the process, because there’s really nothing else for them to hang their hat on,” Duff said.

Looney said the legislature addressed legitimate complaints about the balance of power by amending the emergency power laws in July, when it extended the emergency to Sept. 30. The new law allows the six top leaders of the General Assembly, by a majority vote, to veto any executive order issued under the emergency powers.

“I’m somebody that welcomes input from the legislature, as long as they could do it on a timely basis,” Lamont said. “We’re having good discussions with the legislative leadership.”

Lamont said he has has tried to walk a careful line on mandates. On the question of a broader mandate for masks, he has left to local authorities whether to require them in stores and other settings.

“I’ve got a municipal officials say if you mandate it, ‘I will not enforce it over my dead body.’ I think we got the right balance there,” Lamont said. “I mandated in schools because the kids aren’t vaccinated. I didn’t mandated by town because some towns have 90% of their people vaccinated, others are 60%.

There is no approved vaccine for children under 12. While ordering vaccinations for state employees and certain health care and school employees, he had declined broader vaccine requirements like the one announced by Biden.