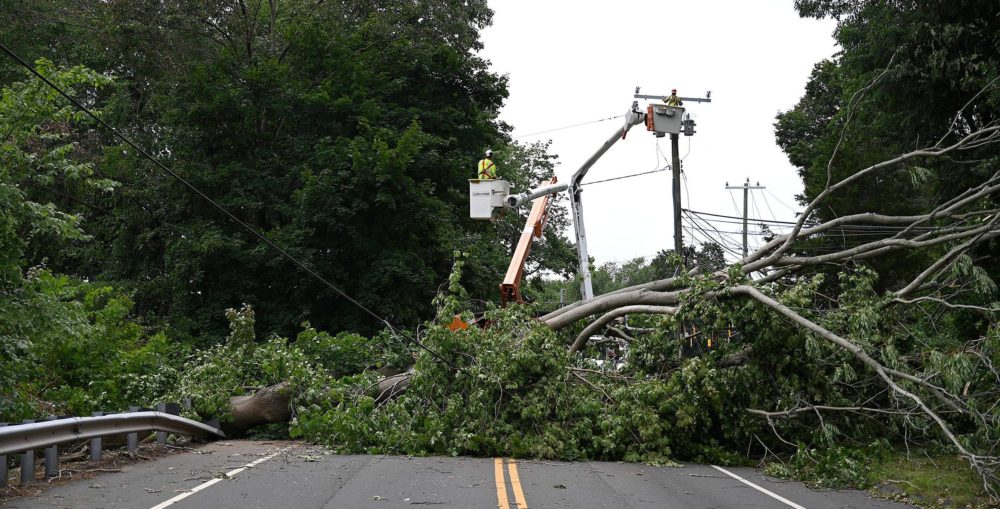 The Public Utilities Regulatory Agency heard Tuesday from Eversource and state officials about a proposed $103 million settlement tied to the utility’s response to Tropical Storm Isaias.

State leaders and Eversource said the deal will get the average ratepayer a total credit of about $35 spread out across their December and January bills.

In 2020, Isaias knocked out power to half of Eversource’s Connecticut customers (about 600,000 people) and left some in the dark for more than a week.

Doug Horton, a vice president at Eversource Energy, said the utility is working to win back the “hearts and mind[s]” of customers in Connecticut and that the proposed settlement will deliver immediate rate relief.

“We think this settlement agreement goes quite a long way in ensuring and making transparent our accountability and our commitment to our customers in Connecticut,” Horton said. “We hope that others do see the value in those commitments.”

The proposal would also introduce a rate freeze on one portion of customers’ bills that would remain in effect until at least 2024.

As Connecticut Public has reported, the proposed deal eliminates a very specific penalty against Eversource that was initially proposed by PURA: cutting Eversource’s allowable profits from Connecticut ratepayers by 0.9% and imposing an additional profit reduction of 0.45%.

All told, that penalty would have translated into at least $135 million in penalties against Eversource over four years, according to PURA.

While the settlement’s lump sum $75 million payout is lower, Connecticut’s acting consumer counsel, Richard Sobolewski, told PURA Tuesday that the settlement agreement has other benefits and is “in the public interest.”

The settlement “results in meaningful and guaranteed rate relief to customers who continue to suffer from the economic impact of the COVID pandemic,” Sobolewski said. “The settlement agreement also creates a series of reforms to improve [Eversource’s] corporate governance, to achieve more local control.”

As part of the deal, Eversource would create a Connecticut-based leadership position that would report directly to senior leadership at the company.

The utility would also drop its two pending storm appeals and relinquish any claim on a $28.4 million storm penalty that is already being paid out to customers.

Horton said the $103 million settlement represents approximately 35% of the company’s annual distribution earnings “and we do not want to end up in this position ever again.”

The settlement was endorsed by the state Department of Energy and Environmental Protection and the offices of Democratic Gov. Ned Lamont and Attorney General William Tong.

PURA still needs to decide whether to approve the agreement.

“The Settling Parties requested in their filing that the Authority approve the proposal no later than November 1, 2021,” said PURA spokesperson Taren O’Connor in an email Tuesday afternoon. “The Authority has taken the proposed settlement and the requested timing under advisement, but does not yet have a date determined for a final decision.”

We’re losing our humanity, and the pandemic is to blame

People’s pandemic views have evolved to into beliefs. That makes people more likely to accept incivility to achieve their ends.