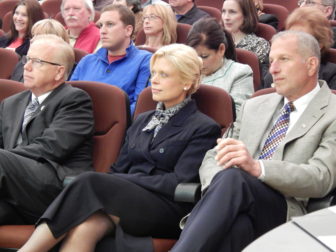 Mark Boughton’s gubernatorial campaign was “cautiously optimistic” Tuesday it had filed sufficient signatures by the 4 p.m. deadline to qualify his running mate, Mark Lauretti, for the Republican primary on August 12.

Not that the day didn’t go without glitches, such as the Boughton-Lauretti campaign showing up in rural Bridgewater at 3:30 p.m. with about 40 signatures, only to find town hall locked and empty, said Heath Fahle, manager of the Boughton campaign.

The campaign had collected more than the 8,190 required signatures, Fahle said. But it was unclear how many would withstand the scrutiny of the validation process as registrars of voters check names against voter lists.

“We’re over the 8,200 or so that we need,” Fahle said. “The last couple of days, we’ve been working on a kind of buffer cushion. We’re cautiously optimistic about where we are.”

Lauretti’s failure to qualify likely would be a fatal blow to Boughton’s campaign, denying him the fundraising partner Boughton needs to raise the $250,000 in small-dollar donations he needs to qualify for a public financing grant of $1.35 million for the primary.

Tom Foley, the 2010 nominee, was endorsed for the GOP gubernatorial nomination last month at the party’s state convention. Boughton, the mayor of Danbury, and Senate Minority Leader John P. McKinney of Fairfield, qualified for the primary by winning at least 15 percent of the delegate vote.

Lauretti, the mayor of Shelton, ended his gubernatorial campaign after the convention and agreed to form a ticket with Boughton.

If he qualifies, Lauretti will be one of four candidates for the lieutenant governor on the GOP primary ballot. The others are: Penny Bacchiochi, the endorsed candidate; David Walker, who is running with McKinney; and Heather Bond Somers. They qualified for the primary at the convention.

Nominees for governor and lieutenant governor appear separately on the primary ballot, so voters do not have to vote for a ticket. Foley has no running mate, and Bacchiochi and Somers have not aligned with a gubernatorial candidate.

The Boughton-Lauretti team will continue to gather signatures, primarily on their home turf of Danbury and Shelton, until late Tuesday afternoon.

The petition process is cumbersome: Signatures must be collected on petition sheets that are segregated by the hometowns of the voters; the petitions bearing the signatures of Ansonia voters, for example, must be filed in Ansonia.

Eighteen teams filed petitions with the registrars of voters in 89 cities and towns. Registrars are required by law to be available to accept petitions from 1 p.m. to 4 p.m., Fahle said. At 4:15 p.m., he was trying to determine his options in Bridgewater.

“We’ve called most of them this morning, and they are standing by,” he said earlier in the day. “At this point in the process, it’s up to the registrars.”

The registrars have one week to examine and forward the petitions to the Secretary of the State’s office, which has the authority to tally the signatures and certify if Lauretti has qualified.