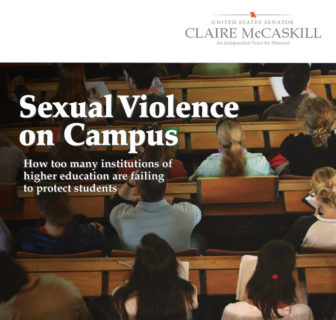 Washington – The nation’s colleges and universities are failing in their handling of sexual assaults on campus on many levels, a report commissioned by a U.S. senator says.

Sen. Claire McCaskill, D-Mo., is seeking to force colleges to better recognize and address sexual violence on campus. According to her 120-page report released Wednesday, “many institutions are failing to comply with the law and best practices in how they handle sexual violence among students. These problems affect nearly every stage of the institutions’ responses to sexual violence.”

Her conclusions are based on more than 300 responses to a comprehensive survey of  four-year institutions, including the University of Connecticut. Among other things, the report concluded that 20 percent of the nation’s colleges fail to train students, faculty and staff on how to prevent and respond to sexual violence.

“There’s no excuse for the notion that they haven’t gotten the training,” said McCaskill. Her study also found many schools use “biased and harmful” procedures for investigating and resolving complaints.

None of the schools survey for the study were identified in the report.

The report said colleges and universities are not following even the most basic rules already required of them. Even though colleges are legally required to have a staff member responsible for managing the school’s compliance with the laws on sexual harassment and sex crimes — a position known as a Title IX coordinator — 10 percent of the schools surveyed failed to do so.  More than 40 percent of the schools surveyed had not conducted a single sexual assault investigation in the past five years.

“That means that they are saying there have been zero incidents of sexual assault on their campuses,” McCaskill said. “That is hard to believe.”

McCaskill said schools should investigate sexual assaults even if the victims don’t’ want to press charges because they fear their case will be made public.

The problem of sexual assaults on campus became an issue at the University of Connecticut last fall after seven current and former students filed complaints against the school with the U.S. Department of Education’s Office of Civil Rights. The complaint cited UConn’s “deliberate indifference” when students report assaults. UConn has denied the charge.

The Connecticut legislature also held hearings in response to the complaints, ultimately voting to require colleges and universities to take a number of steps to improve campus safety, including making annual reports on sexual violence on campus.

UConn is not the only school to have problems with allegations of rape on campus. In June, the Office of Civil Rights released a list of more than 50 institutions, including UConn, that are under investigation.

According to the U.S. Department of Education, UConn reported 12 forcible sex offenses in its main campus in Storrs in 2010; eight incidences in 2011 and 13 in 2012.

Sen. Richard Blumenthal, D-Conn., and Kirsten Gillibrand, D-N.Y., are helping McCaskill craft legislation that would press the nation’s colleges to better combat and report sexual violence on their campuses.

The legislation may require better training of college staff and greater disclosures of assaults. It may also seek a change in current Title IX law that can strip all federal funds from schools found in violation. Schools found in violation may be penalized through a fine, instead.
McCaskill said she’s confident the legislation can win Senate approval, even in a Congress with bitter partisan divisions.

“If the issue can separate itself from the ‘gotcha politics’ that we have today… we can achieve victory in the United States Senate,” she said.
Darcie Folsom, director of Sexual Violence Prevention & Advocacy at Connecticut College, said she is “gratified” by McCaskill’s efforts.

“The results [of the report] emphasize for me the value of the work we have undertaken at Connecticut College where we have in place comprehensive programming for sexual assault prevention, awareness and advocacy,” Folsom said.