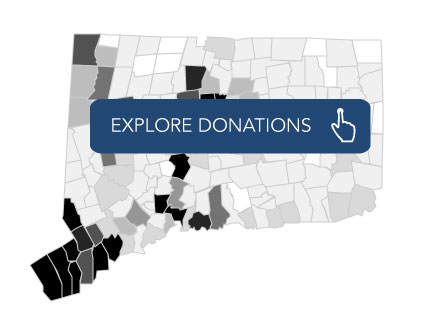 Washington — Candidates running for the state’s five U.S. House of Representative seats raised more than $11 million for their campaigns, according to a Connecticut Mirror analysis of the latest Federal Elections Commission data.

Thousands of Connecticut residents gave to the state’s five Democratic incumbents and their Republican challengers, but the donations were not evenly distributed across the state.

All the incumbents raised a considerable amount of money in wealthy Fairfield County, including Rep. Jim Himes, D-4th District, who actually represents the area in Congress.. So did Dan Debicella, a Republican from Shelton who is challenging Himes.

The Mirror analysis also found that congressional candidates raised a lot of their campaign funds from donors outside the state – New York and Washington, D.C., followed Greenwich as the sources of the most donations.

Rep. John Larson, D-1st District, who sits on the powerful Ways and Means Committee, raised the most money from PACs, about $1.06 million, followed by Himes, who raised about $1 million.

Esty received the most itemized donations (3,488), and Republican James Brown of Stratford, who has challenged Rep. Rosa DeLauro, the fewest (7.)

The top individual donor to the state’s congressional campaigns was Stewart Greenfield of Westport, a hedge fund investor involved in environmental causes. He donated a total of $19,000.

No. 2 on the list was Francisco Borges, chief executive officer of Landmark Partners, a private equity and real estate firm and a former Connecticut state treasurer who once served as deputy mayor of Hartford. He donated to each Democratic incumbent, giving a total of $15,200.

The third largest donor was John Barrett of West Haven, who donated $14,900, also to the state’s Democratic incumbents.

Barrett and his brother Bruce Barrett are partners in an outdoor advertising firm called Outdoor Communications, Inc., and both are politically active, having put up a billboard in Waterbury this year critical of Greenberg and one two years ago critical of Linda McMahon, a failed Republican candidate for the U.S. Senate.