Washington – With an average of 22 veterans committing suicide every day, U.S. Sens. Richard Blumenthal, D-Conn., and John McCain, R-Ariz., teamed up to try to do something about it  — and Senate colleagues on Tuesday voted unanimously to help.

The Senate voted 99-0 to approve the Clay Hunt Suicide Prevention for American Veterans bill, legislation sponsored by Blumenthal and McCain that will provide more mental health resources to the Department of Veterans Affairs and demand more accountability from the agency. The VA’s reputation was tarnished by last year’s revelations about the poor delivery of health care at some of its facilities.

“We owe these wounded warriors more effective mental health care, so they can win the war against inner demons that come home from service,” Blumenthal said.

But even Blumenthal said his legislation is only the first step in trying to tackle what many consider an American tragedy.

“We’re making only a down-payment here,” he said.

The bill now goes to the White House where President Obama is expected to sign it. Blumenthal’s legislation would require an annual, third-party evaluation of mental health care and suicide prevention programs at the VA and establish a pilot program that would repay up to $30,000 per year of the college loans of psychiatrists who commit to at least two years of service in the VA.

The bill, which was approved easily by a voice vote in the House of Representatives last month, would also establish another pilot program in five communities with high numbers of veterans. That program would establish peer support groups to help in the transition from active duty to civilian life and improve access to mental health services.

Clay Hunt was a decorated 28-year-old Marine who committed suicide in 2011 after struggling to get help for his Post Traumatic Stress Syndrome from the Department of Veterans Affairs.

Hunt had served both in Iraq — where he was shot and earned a Purple Heart — and Afghanistan. Upon his discharge he received a 30 percent disability rating from the VA for his PTSD, a rating that limited his benefits.

Hunt relied on the VA in Houston exclusively for his medical care and was critical of that care because of problems scheduling appointments and the treatment he received, which consisted solely of medication. His family said he only received counseling to determine if the medication he was prescribed was working, If not, it was changed.

Hunt said he felt he was “a guinea pig for drugs” and complained that going to a VA facility in Houston was “too stressful.”

Five weeks after his death, and 18 months after appealing his PTSD rating, the VA rated Hunt’s PTSD as a 100 percent disability. 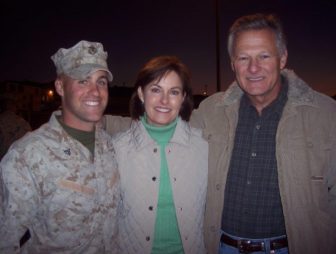 Clay Hunt and his parents, Susan and Richard Selke

The young Marine became a symbol of the mental health challenges facing returning troops for many veterans organizations, including the Iraq and Afghanistan Veterans of America, which helped draft the bill.

The bill always had strong bipartisan support, but it was blocked at the end of the last session of Congress by Sen. Tom Coburn, R-Okla., who has since retired. Coburn said he opposed the $22 million cost of the bill because it duplicated existing VA programs and was not paid for by offsets elsewhere in the budget.

The top Democrat on the Senate Veterans Affairs Committee, Blumenthal said the issue of veteran suicides “is a passion for me.”

His guest at President Obama’s State of the Union speech earlier this month was Joann Eldridge. She’s the widow of Justin Eldridge, a Marine who served in Afghanistan and committed suicide in 2013 after a long battle with post-traumatic stress and a traumatic brain injury that went undiagnosed for a long time. Eldridge and her four children live in Oxford.