As Obamacare sign-up period winds down, a final push for the uninsured 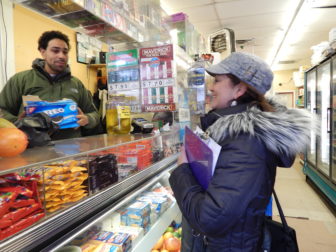 Hartford – It was 18 degrees out when Marta Persia set out Friday morning, laptop bag slung over her shoulder, to find the uninsured.

“You have insurance?” she asked two women waiting for a bus on Main Street, pushing a flyer in their direction. “Yeah,” one said.

Persia crossed the street to visit a mini mart, where she hung up a flyer advertising help getting coverage and chatted in Spanish with Juan Brito, who was working behind the counter. (The Spanish word for “Obamacare” is “Obamacare.”)

A few blocks later, she stopped to ask for directions from a man smoking a cigarette, then asked if he had health care coverage. He did.

“You know, we all gotta get insurance ’cause they’ll fine you,” the man told her.

As the second enrollment period under Obamacare winds down – Sunday is the last day to sign up for private insurance this year – Persia and others are gearing up for a final push.

Access Health CT, the state’s health insurance exchange, has been mailing information to 200,000 state residents deemed like to be uninsured and calling many in Hartford – the city with the highest rate of uninsured residents, according to the exchange’s research.

Many people expected this year’s three-month enrollment period to be more challenging than last year’s six-month sign-up blitz, which included enrollment fairs across the state, widespread publicity about the health law’s rollout and millions of dollars in federal funds that helped pay more than 200 people from community organizations to conduct outreach.

This enrollment period came with the added complication of trying to renew existing customers while appealing to those who were still uninsured – and with no federal dollars for outreach.

While Persia and others trying to reach the uninsured say it’s been tougher, others, including Fairfield insurance broker Tim Tracy Jr., said this enrollment period has been smoother than the previous one.

“Obviously, there’s still hurdles, but we’re only in year two,” said Tracy, president of the Connecticut Chapter of the National Association of Health Underwriters.

Access Health’s goals for this enrollment period include signing up 110,000 private insurance customers and reducing the number of uninsured by 35,000 – a quarter of the 140,000 people Access Health officials believe still don’t have coverage. 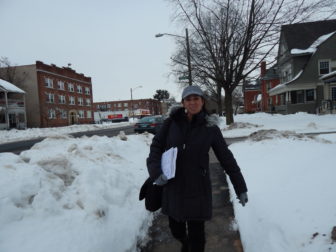 Marta Persia walks down Wethersfield Avenue in Hartford, hoping to find people who are uninsured and hang up flyers advertising help getting coverage.

Since the first Obamacare sign-up period began in October 2013, the number of Connecticut residents enrolled in Medicaid has grown by more than 127,000. Madrak said total membership – private insurance and Medicaid – is approaching 500,000, although that figure includes many people who already had Medicaid and used the exchange to renew their coverage.

Some of Access Health’s new insurance customers are likely to be people who had insurance last year but needed to find new policies for 2015 because their old plans didn’t meet the health law’s requirements and were discontinued. More than 60,000 Connecticut residents were in that position, but it’s not clear how many bought new coverage through the exchange.

Tracy, the Fairfield broker, said about 95 percent of his clients who needed to buy new policies picked plans sold outside the exchange, where he said there are more plan options and wider choices in provider networks. The exceptions, he said, are those who qualify for federal subsidies to discount their coverage, which is only available to people who buy plans through the exchange.

With fewer uninsured to reach and less money to spend, Access Health officials took a different approach to enrollment efforts this year, offering help during set hours at fixed locations, including storefronts in New Britain and New Haven, libraries and state Department of Labor offices. As of mid-January, 4,843 people signed up for coverage at those locations, Madrak said. 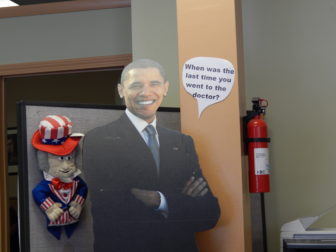 “When was the last time you went to the doctor?” reads a speech bubble next to a cardboard cutout of the president inside a Hartford insurance and tax office that advertised helping people sign up for Obamacare.

People involved in last year’s campaign worried the exchange’s strategy this time wouldn’t be enough to reach those who remained uninsured. In response, the Connecticut Health Foundation, Hartford Foundation for Public Giving and The Foundation for Community Health provided money for about 35 people – those most effective at signing people up last time – to conduct “shoe leather” outreach to find and help the uninsured.

Persia is one of them. She works for the National Alliance on Mental Illness, Connecticut, and has spent much of the sign-up period visiting libraries, job training programs and churches. She signed up 10 people at an Olive Garden.

Visits to tax clinics have been fruitful for finding people interested in signing up, since people without coverage – or a valid excuse – must pay a penalty when they file their taxes.

She spent part of the day walking through Hartford, dropping off flyers. At El Kasique Mini Mart, she chatted with Brito, the man working behind the counter, who was uninsured until signing up for insurance last year.

He’s been frustrated at the difficulty of getting questions answered in Spanish by his insurance company. Even things like how much he’ll have to pay if he goes to the hospital or what the plan covers have been hard to find out by phone, he said.

Compared to last year, this sign-up period has been more challenging, with fewer people showing up eager to get coverage, said Natasha Harris, youth program manager for the Urban League of Greater Hartford, another organization that received foundation funding to do outreach.

“A lot of them say, ‘I never get sick so I really didn’t see the point of having it, but if I’m going to get fined, then I’d rather have it and cover myself than pay for something that I’m not going to get anything out of,’” she said.

But Harris said others are probably opting for the penalty, which costs less than insurance.

“I just wish more people would enroll,” she said. “I know the need is there.”

And one man she helped last year called to say that after getting coverage, he learned he had cancer. He told Harris he wouldn’t have been insured if the health law hadn’t passed, and if she hadn’t been around to help him sign up.

“He just called to thank me,” she said.

For more information about health insurance and Obamacare, visit The Mirror’s guide to health care in Connecticut.