What you should know about this year’s standardized testing 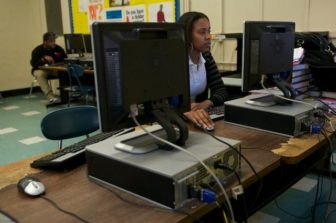 Thousands of students across Connecticut will begin taking controversial new standardized tests Tuesday that are aligned with the Common Core State Standards.

Critics have raised questions and concerns about how students are tested, whether students are allowed to opt out of taking the exams and the potential high-stakes nature of the results.

Here is what parents and students should know.

The questions won’t all be traditional multiple-choice selections, either. Children will be expected to explain and show how they got to their answers. (Take a practice test now here.)

“The Smarter Balanced Assessments offers significant improvements over paper-based tests of the past,” reads the State Department of Education’s February informational letter to parents.

Educators at the education department assert that the exams are worthwhile, and report that the state will spend $17 million over this fiscal year and the next developing and administering standardized tests.

But Mark Waxenberg, the leader of the state’s largest teachers’ union, says the tests “are sucking the educational oxygen out of the room for teaching and learning.”

His union is spending hundreds of thousands of dollars running advertisements calling on Connecticut lawmakers to join 21 other states that have backed out of using the Common Core-aligned test.

The legislature’s Education Committee will hear testimony Thursday on a bill that would require the education department to study the effectiveness of the Smarter Balanced test and whether replacing it with another makes sense.

True or false: Students can opt out of the test?

Federal and state officials say the answer to that question is complicated.

“There is no mechanism or process for a parent to opt their child out,” said Kelly Donnelly, a spokeswoman for the State Department of Education.

In 2013, the most recent year for which data is available, nearly 800 elementary and middle school students did not take statewide standardized tests. Those students accounted for less than one-half of a percent of the 244,000 students in grades 3 through 8. 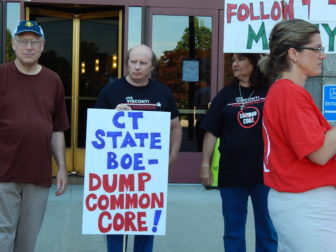 Protesters urge the State Board of Education to eliminate the Common Core State Standards in Hartford last summer.

While it is unclear why these students were marked as absent on the testing and makeup test days, a recently formed coalition of Connecticut parents plans to send their children to school this week with a letter demanding they not be tested.

“We do not give our consent for (child’s first name) to take any tests that will be graded or evaluated via computer or any source outside of his teacher who administers it. This includes SBAC assessments. Please note that this is not a request,” says the letter the Connecticut Coalition Against Common Core suggests parents send to school with their children this week.

It’s unclear whether students will be punished for not taking the exams.

State law mandates that a student’s test results cannot be the “sole criterion” for grade promotion or graduation. However, state law also requires that the decision over whether a student graduates or moves onto the next grade “shall include, but not be exclusively based on” the results of the state standardized tests.

“This is where the legal picture becomes murkier,” Mark Sommaruga, a lawyer who represents numerous boards of education in Connecticut writes on his education law blog.

Allan B. Taylor, the chairman of the State Board of Education, told legislators last spring that the response is up to local boards of education.

“The State Department of Education will not be reaching down and sanctioning parents,” said Allan B. Taylor, chairman of the State Board of Education.

And Jeffrey Villar, a former superintendent in districts including Rocky Hill and Windsor, said districts are interpreting the law differently.

“It just depends on the district,” said Villar, now the executive director of the Connecticut Council for Education Reform, a business-backed advocacy group.

For example, when he was the associate superintendent in Meriden, high school students were required to pass the CAPT exam to graduate.

This uncertainty in the law has left the door open to interpretation and criticism.

“Some local school superintendents have tried to mislead and even lie to parents…Anything other [than] recognizing and accommodating the parents directive is harassment,” Jonathan Pelto, a former Democratic state legislator and Common Core adversary, wrote Monday on his education blog.

The legislature’s Education Committee this year has not considered any bills that would clarify what happens when a student sits out, or whether a student can be punished.

A few states — including California, Utah, Oregon and Pennsylvania — very clearly allow students to opt out of annual testing, according to a research brief published by the Education Commission of the States, a non-partisan think tank that studies education policies. Others, such as Maryland and Michigan, expressly prohibit opting out.

“Tests are sucking the educational oxygen out of the room for teaching and learning,” say Mark Waxenberg, leader of the state’s largest teachers’ union

“You can’t force someone to take a test they will not take,” he said during an interview. “They will be sent someplace else.”

However, state and federal officials warn that if more than 5 percent of a school’s students refuse to take the tests, they could withhold funding from those students’ schools.

“It is the responsibility of states to ensure that all students are assessed annually because it gives educators and parents an idea of how the student is doing and ensures that schools are paying attention to traditionally underserved populations,” said Dori Nolt, a spokeswoman for the U.S. Department of Education. “The Department has not had to withhold money — yet — over this requirement because states have either complied or have appropriately sanctioned schools or districts that assessed less than 95 percent of students.”

Federal education officials in recent months have written leaders in Alaska, Colorado, Illinois to remind them of their testing obligations.

The amount of money at stake could be huge.

Connecticut’s schools received $827.6 million from the federal government during the 2011-12 school year, which is 8.3 percent of total education spending, the U.S. Department of Education reports. State spending totaled $3.4 billion, just over one-third of spending.

“If a local district fails to comply with the law, there can be sanctions,” said Donnelly, the state education department’s spokeswoman. “The sanctions would be determined in each individual case.”

Data show that in recent years no school has had more than 5 percent of its students fail to take the statewide standardized tests.

And educators don’t expect huge numbers of students to opt out this year, either, even with the pushback.

“I don’t think it’s pervasive,” said Cirasuolo, the leader of the state superintendent association. “We’ll have to wait and see.”

What the new tests will be used for has added to the controversy.

In the past, results of standardized state tests have been used as a basis for punitive measures against low-performing schools, such as reconstituting the school and shaking up existing staff.

Teachers, however, will have more at stake because the test results are scheduled to become part of their performance ratings in two school years.

Standardized tests “do not measure the quality of a school or the performance of an individual teacher, and are corrupted when misused for these purposes. They can disrupt authentic learning for long periods of time. Yet, some districts have oriented their practice and curriculum around these tests,” a group of 12 Connecticut superintendents recently wrote in an opinion piece published in The Mirror. “This misuse of data is a disservice to each community and to the entire state because it fails to capture the many ways in which schools generate student success.”