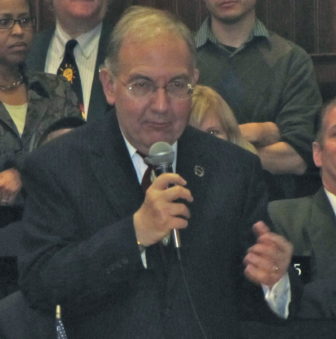 State senators have approved a bill forbidding state officials from having employees sign non-disparagement agreements when leaving their  state jobs — a move directed at the state’s largest public college system.

Last winter, the provost of the Connecticut State Colleges & Universities departed unexpectedly and abruptly after meeting with President Gregory Gray.

As a firestorm of backlash from faculty surrounding the departure heated up, the system entered into a separation agreement with the former provost, Michael Gargano. That agreement restricted Gargano from making any derogatory statements about the college system in exchange for remaining on the payroll for 16 weeks after his departure — an agreement that cost the system $70,000.

“Obviously an employee of that high a level, potentially, could have information regarding the operations of the department or enterprise where he worked that could be of importance to the General Assembly, perhaps in determining what is or isn’t an appropriate operation,” said Senate President Pro Tem Martin Looney, D-New Haven. “It really is an important issue of transparency.”

The bill was approved 30-4, with the dissenting votes coming from Republicans. Two senators did not vote.

Gargano was paid through Feb. 28. He has since written several opinion articles, published in the Connecticut Mirror, criticizing the college system.

“The names and faces have changed, but, the same mistakes have been made with compensation increases for administrators, disregard for shared governance, too much emphasis on system management of the campus, tone-deaf system leadership, system office overly stated enrollment and revenue projections that have led to various fiscal crises, and questionable expensive consultant contracts,” Gargano wrote last week. “The most concerning of all is the lack of accountability for the people supposedly in charge.”

Separation agreements are not unusual in the state’s public colleges. Aside from Gargano’s, the Board of Regents has entered into two other such agreements with employees in 2014. They cost the system $233,183, according to documents provided the Mirror through a Freedom of Information Act request. All the agreements included non-disparagement clauses. The departures of those employees were not part of the system’s merger several years ago, which resulted in 13 other separation agreements.

At the University of Connecticut, a separate public university, 28 employees signed separation agreements with college leaders over the last four years. Nearly all of those agreements provide for those employees to continue to be paid for months after their departure, and many have clauses restricting what the employee can say publicly.

The bill will only affect managers at the state’s public agencies and public colleges and not private companies. Legislators said such clauses may be necessary in the private sector to protect proprietary information.

Looney was the only person to testify on this bill when the Labor Committee held a public hearing.

Sen. Cathy A. Osten, the senate chairwoman of the legislature’s Labor and Public Employees Committee, agreed Thursday that forbidding non-disparagement clauses is necessary.

“In the public sector, they defy efforts to remain transparent,” said Osten, D-Sprague. “We should have the information available.”

The bill now heads to the state House of Representatives, where it’s future is uncertain.