DeLauro continues to lead defiance against Obama on trade 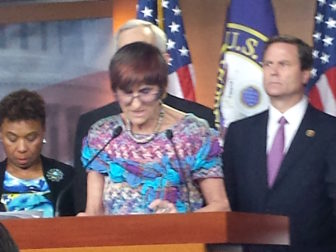 Washington – A defiant Rep. Rosa DeLauro vowed Tuesday to continue her battle against President Obama’s trade agenda, even as the president, usually a political ally, scrambled to find a way to rally support for legislation that would facilitate negotiations of a new trade pact with 11 Pacific Rim partners.

“We are united and determined to resist,” said DeLauro, a leader of a group of House Democrats who have defied Obama on a bill that would give the president trade promotion authority and limit Congress to an up-or-down vote on a final Trans-Pacific Partnership agreement.

Helped by a minority of Democrats, the House approved the “fast-track” bill Friday on a 219-211 vote. But a companion bill to extend a worker training program known as Trade Adjustment Assistance was rejected when a majority of House Democrats, who usually support the program, joined House Republicans in voting again the legislation. Because rules required that the House approve both parts of the legislation, previously approved by the Senate, the “no” vote meant defeat for the overall package.

“This vote last Friday was a tipping point. And we cannot go back,” DeLauro, D-3rd District, said.

What happened, DeLauro said, is that a majority of House Democrats said “no more of this business as usual.”

DeLauro has become a high-profile leader against the fast-track bill and the TPP, holding Capitol Hill press conferences every few days to denounce the trade pact and the way it is being negotiated behind closed doors. Early in this session of Congress, she reached out to newly elected Democrats to convince them to oppose the trade pact. She has also served as an unofficial whip of her more senior colleagues.

DeLauro has led the push against trade legislation before, when she was tapped to help whip opposition to the North American Free Trade Agreement in 1991.

When considering multi-nation trade pacts like TPP, she said, what must be considered first and foremost is the impact on wages and jobs and companies that want to build and invest in America.

“We need to begin to fashion fundamental changes to these agreements to make it possible for the United States to expand its trade, become stronger economically, while raising the living standards of the middle class. It is possible,” she said.

Obama and those who support the effort to bind 12 Pacific Rim nations, including Japan and Australia but excluding China, say the United States would benefit from more access to Asian markets.

In her battle against the Pacific trade pact, DeLauro has a powerful partner, the nation’s labor unions, who are concerned about job losses and lowered wages.

According to the Center for Responsive Politics, DeLauro has raised about $13.3 million since 1989, at least $2.6 million from labor political action committees and officials.

Meanwhile, the only member of Connecticut’s all–Democratic congressional delegation to support the fast-track bill, Rep. Jim Himes, D-4th District, has also raised about $13.3 million since he first ran for the House of Representatives in 2008.

It took DeLauro 26 years to raise that amount. All others in Connecticut’s House delegation have raised less.

Only about $580,000 of the millions in campaign cash Himes has raised came from unions. That’s the lowest percentage of campaign contributions from organized labor among the Connecticut House delegation.

Connecticut U.S. Reps. Jim Himes and Rosa DeLauro are on opposite sides on the issue of granting President Obama fast-track trade authority.

The ads, featuring individual members, including Esty and Courtney, will run on Facebook and in print in the members’ district.

“Thank you for standing with working families,” the ads say, featuring photos of the lawmakers.

Meanwhile, the House on Tuesday voted for a bill that would allow a second vote on the Trade Adjustment Assistance program until July 31.