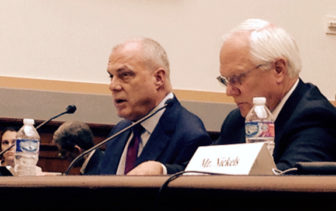 Washington – Members of both political parties expressed increasing skepticism Tuesday when they continued their scrutiny of the proposed mergers of insurance giants Aetna and Humana and Anthem and Cigna.

Lawmakers have been subjected to heavy lobbying from the American Medical Association and the American Hospital Association, who oppose the proposed mergers, as well as from local doctors and hospitals who warn of an unhealthy concentration of market share in the health insurance industry.

Rep. Doug Collins, R-Ga., who represents a largely rural district, said that after a merger with Aetna, Humana would have 65 percent of Georgia’s health insurance market.

“Tell me why I should not be concerned about the concentration,” said Collins. The Georgia Republican was among several members of the House Judiciary Committee questioning insurance executives about their plans.

Aetna CEO Mark Bertolini, who appeared with five other witnesses, tried to assure Collins his constituents would still have choices, post-merger.

“I understand there are choices, but those choices are narrower and narrower,” Collins said.

The AMA, in a recent and exhaustive study of the merger issues, cited Connecticut as one of 14 states where competition in the health care market would shrink substantially in a merger between Anthem and Cigna, which is headquartered in Bloomfield.

The Aetna-Humana and Anthem-Cigna mergers, announced earlier this year, are under review by the Justice Department’s anti-trust division.

Congress has no role in the decision of whether to allow the mergers to go forward. But lawmakers can try to influence Justice Department officials and rally public opinion.

Bertolini, who was questioned last week by a Senate panel, continued on Tuesday to try to sell his merger plan, calling it a marriage of a large consumer insurer with a dominant player in the Medicare market that will result in “positive changes.”

“After the acquisition, Aetna will have a product portfolio balanced more evenly between commercial and government products,” Bertolini said.

Anthem CEO Joseph Swedish said the merger between the two insurers would be “complimentary,” with few cases of “market overlap.”

But in his written testimony, AMA President-elect Andrew Gurman said “the AMA’s analysis shows there has been a near total collapse of competition among health insurers.”

To enhance competition among insurers, Bertolini said, the Justice Department could request the insurers divest themselves of some of their markets before a merger is approved.

But Jaimie King, a law professor at the University of California, said divestitures were required when Aetna merged with Prudential in 1999. Nevertheless, there was an almost an immediate 7 percent hike in premiums.

“It’s not always easy for the Justice Department to predict ahead if premiums will rise,” King said. 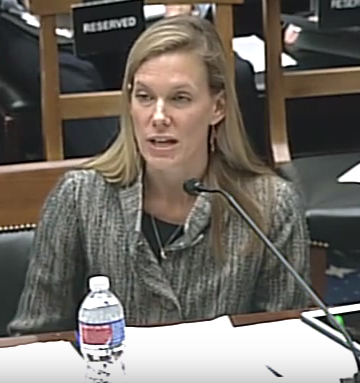 Jaime King: “Quality of care did not increase.”

She also said that despite promises from Aetna, “the quality of care did not increase” after the merger.

Lawmakers questioned the insurance executives about the rise in health care premiums and asked whether any cost savings wrought by the mergers would be passed on to the customers.

Rep. Hakeem Jeffries, D-N.Y., said “there is no evidence that efficiencies [in previous insurance company mergers] resulted in those savings going to the customers.”

Bertolini said there are many “underlying pressures” driving insurance rates, including the rise in medical costs which he said is a result of the current fee-for-service system.

He said focusing on patient outcomes to set medical costs would end the sharp increases in health care costs.

Below is a composite excerpt from the AMA’s most recent study on insurer competition.  The study attempts to measure and rank the level of insurance market competition using the “Herfindahl-Hirschman Index” that is used by the U.S. Department of Justice and Federal Trade Commission to evaluate proposed mergers. 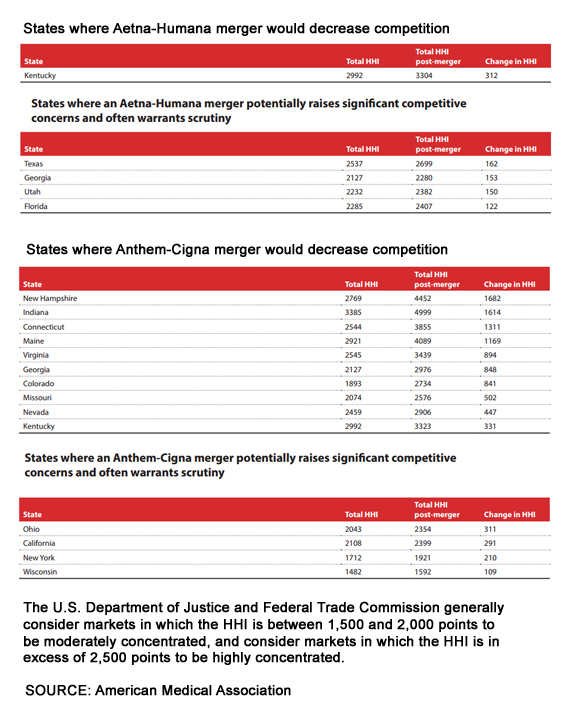