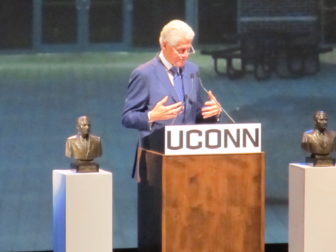 Storrs – It was a wistful Bill Clinton who took the stage Thursday night to accept a human rights award, a 69-year-old grandfather with a raspy voice, weighted with regret for abuses he failed to stop as president, buoyed by hope for good works to come.

Exactly 20 years after Clinton helped dedicate the Thomas J. Dodd Research Center during the third year of his presidency, he returned to the University of Connecticut campus on behalf of his foundation to accept the Dodd Prize for international justice and human rights.

“At its core, the idea of human rights is pretty straightforward,” Clinton said. “Men and women, adults and children, straight and gay, of any race and tribe are entitled to be treated with the same dignity and have the same opportunity, to feel the same sense of security, as other people.”

Clinton is still fond of developing themes like a stubborn mason who seems to be working without a blueprint, starting with a single stone and ending with a perfectly straight wall. He began at the most elemental level, the human genome. He told his audience in the nearly full 2,300-seat Jorgensen Center for the Performing Arts to look around.

“Every non age-related difference you can see – your height, your body shape, your eye color and your race and your gender — all are in one half of one percent of your genome,” he said. “We’re 99-and-a-half percent the same.”

Peering over reading glasses, he smiled and noted we all do same thing. We notice the differences as we walk past a storefront, pausing to check a reflection and perhaps wish we were taller, thinner, more athletic.

“Now, most of it is harmless, but a lot of it is not. And periodically the world gets obsessed with redefining otherness. We want to identify who is them and who is us,” Clinton said. “When we get insecure, we want to return to home base and be with us, and not with them.”

It was a soft, gentle explanation of the basic roots of genocide, a topic that haunts his presidency.

Clinton had human-rights victories. He intervened in Bosnia with U.S.-led airstrikes. But he is the president who failed Rwanda, where a genocidal slaughter of the Tutsi tribe by the dominant Hutus began in 1994, his second year in the White House. Classified documents made public in 2004 showed his administration knew of a “final solution to eliminate all the Tutsis” in advance of the killing of one million men, women and children.

He referred to the Rwandan genocide obliquely Thursday night.

“I’m grateful that when I was president time and circumstance made it possible for me to end some terrible abuses of human rights,” he said. “I’m heartbroken whenever I think of the opportunity that I could have had and didn’t seize.”

In recent years, Clinton has said he bumbled an opportunity to save, perhaps, 300,000 of those one million lives in Rwanda. Clinton has told interviewers the failure was part of the inspiration to form his foundation, recently renamed as the Bill, Hillary and Chelsea Clinton Foundation.

I’m heartbroken whenever I think of the opportunity that I could have had and didn’t seize.
Bill Clinton

His foundation shared the Dodd Prize with Tostan, an international human rights organization based in Senegal, where it has prevailed on much of the country to stop the genital cutting of women and forced marriage of children.

They all were introduced by former U.S. Sen. Chris Dodd, who recalled Clinton’s visit in 1995 to honor the memory of his father.

“It seems fitting that 20 years later, we bring him back,” Dodd said.

Clinton’s speech ambled and circled around what’s transpired in the intervening decades, some of it flattering to his legacy, some not. He riffed on philosophy, gays in the military, the industriousness of ants, the danger of climate-change deniers, the importance of saving ecosystems.

His foundation is trying to save two tracts of land in Borneo, home to endangered orangutans. “They’re 96 percent of our genome, by the way,” Clinton said.

He casually dropped names. It was Pope John Paul II who told him the 20th century began with one war in Sarajevo and Clinton must ensure it did not end with another.

He noted that 2015 was the 20th anniversary of the normalization of U.S. relations with Vietnam, a cease-fire in Northern Ireland – and the Serbian slaughter of Bosnian Muslims in Srebrenica.

Clinton described visiting the factory where many of the 8,000 murders were committed. The occasion was a remembrance this summer, an expression of reconciliation, tainted by anger. The Serbian prime minister attended, but was forced to flee by an angry Muslim mob.

The city’s Muslim mayor, whom Clinton described as one of the few males his age who escaped the Serbian slaughter, praised the prime minister for attending and publicly apologized for the abuse.

Clinton said he remained an optimist. A compliment for his wife, Hillary, segued to a reflection about gay rights that he saw reflecting well on his young audience, if unfavorably on him and his generation.

“One of the two or three most consequential speeches that occurred in my presidency was when Hillary went to Beijing and said, ‘Women’s rights are human rights, and human rights are women’s rights,’ ” he said. “Today, we say that about gay rights.”

Clinton, who reneged on a campaign promise to allow gays to serve openly in the military, instead adopting a policy of “don’t ask, don’t tell,” mentioned a visit the previous evening to West Point. The commandant told him the arrival of openly gay cadets was no big deal.

“He said, ‘These young people are so over it.’ And it turned out all of the senior officers who had been tiptoeing around, saying look at what is this going to do to unit morale, were just wrong,” Clinton said. 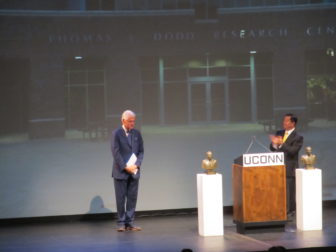 Provost Mun Choi joins the audience in sending Clinton off with applause.

Addressing the college students, Clinton mentioned the work of Tostan and told his audience there are many ways, directly and indirectly, they can support the fight for human rights, a struggle as old as humankind.

“The outcome of this contest will determine the world our grandchildren live in,” Clinton said, a recent grandfather. In his speeches as president, he used to talk about a responsibility to the world’s children.

He told students not born when he was elected — Nov. 3 marks the 23rd anniversary of his victory over President George H.W. Bush — they live in a country that is not perfect, but “always seems to stumble in the right direction.”

He urged them to be participants in that struggle.

“Once you have the power to do something, you are saddled with the responsibility of your action or inaction, just like I will always be responsible for the things I did — and the things I didn’t do,” he said. “We’re all in the same boat now.”