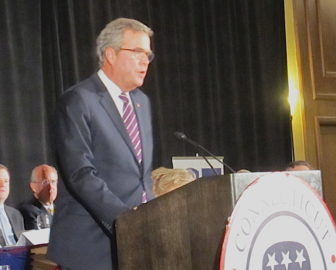 Washington – Jeb Bush, in Connecticut Thursday to raise some campaign cash, received a rough welcome from Rep. Elizabeth Esty and a Newtown gun control advocate, who don’t like the GOP’s presidential hopeful’s stance on firearms.

Thursday’s Bush-bashing, in a press call sponsored by the Democratic National Committee, is part of a larger strategy.

In a break from their policy in recent campaigns, Democrats are pushing the issue of gun control into the race for the White House.

Thursday Esty and Po Murray, head of the Newtown Action Alliance, took issue with a comment Bush made after the mass shooting at a community college in Oregon.

Bush said “stuff happens,” and argued that officials should fight the impulse to react to tragedies with more government.

“I had this challenge as governor, ’cause we had, look, stuff happens, there’s always a crisis,” Bush said at a campaign stop in South Carolina early this month. “And the impulse is always to do something, and it’s not necessarily the right thing to do.”

Bush has since clarified his remarks, saying they were not directed at the shootings in Oregon, but to all tragedies that occur.

But that explanation did not satisfy Esty, who said “We should not accept that after a mass shooting that ‘stuff happens.’”

The lawmaker, who represents Newtown in Congress, also took issue with Bush’s A-plus rating from the National Rifle Association. The NRA said that rating came from Bush’s 2002 re-election bid for Florida governor and that the organization hasn’t rated candidates for the 2016 presidential race yet.

Gun control was a main issue in Tuesday’s Democratic debate, with both former Maryland Gov. Martin O’Malley and former Secretary of State Hillary Clinton competing to be the strongest supporter of gun control. Both said their biggest enemy was the NRA.

Murray of the Newtown Action Alliance said, “We are supporting candidates who are making gun violence a priority. Jeb Bush is the opposite of that.”

That may be a risky strategy in swing states with strong hunting and gun-rights cultures.

NRA spokeswoman Catherine Mortensen said, “In an attempt to appeal to their liberal base, anti-gun candidates are alienating the majority of Americans who support the Second Amendment and oppose more gun control.”

“Gun control has been rejected time and again by the American people, most recently in the 2014 election cycle when over 90 percent of NRA-backed candidates won election,” Mortensen said. “Voters are frustrated, and they want solutions not propaganda.”

Like Bush and other Republicans, the NRA said Democrats should fix “a broken mental health system” instead of calling for gun restrictions if they want to stop mass shootings.

Democrats have also revived the gun control issue in Congress after the mass shooting it Umpqua Community College.

Senate Democrats hope to press for approval of legislation that would extend FBI background checks and raise penalties for “straw purchases,” that is buying a firearm for someone who is barred by the law from owning one. The new gun-control legislation is similar to a bill that was blocked by a Senate filibuster just months after the Sandy Hook Elementary School shootings that resulted in the deaths of 20 first-graders and six school employees.

Bush has scheduled a fundraiser in New Canaan and another in Greenwich Thursday evening. As of June 30, he raised more money in the state than all other GOP presidential candidates, more than $500,000.