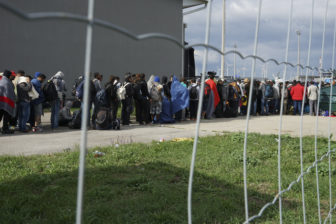 A line of Syrian refugees crossing the border of Hungary and Austria in September.

Washington – A growing number of GOP governors are citing the Paris attacks as a reason not to accept Syrian refugees, but Connecticut politicians are rejecting that notion.

That’s not to say Connecticut’s political leaders are not in favor of rigorous vetting of the newcomers.

“Obviously in light of the tragedy in Paris, we have questions about the Department of Homeland Security’s screening measures for refugees entering our country,” said Devon Puglia, spokesman for Gov. Dannel Malloy.

Puglia said the governor’s office is “continuing to work with and await guidance from the appropriate federal agencies on screening measures that will be taken.”

“With that said, if refugees — many of whom are children fleeing a horrific, war-torn country — seek and are granted asylum after a rigorous security process, we should and will welcome them in Connecticut,” Puglia said.

Controversy over the Syrian refugees, who are fleeing their country’s civil war by the millions, was spawned by revelations that one of the terrorists responsible for the murderous attacks in Paris on Friday, attributed to ISIS, may have come from Syria on a boat to Greece with a group of refugees.

But intelligence on most of the attackers was that they were home-grown terrorists who had been living in France and other places in Europe.

Nevertheless more than 17 GOP governors on Monday said they would not allow Syrian refugees into their states.

“The acts of terror committed over the weekend are a tragic reminder to the world that evil exists and takes the form of terrorists who seek to destroy the basic freedoms we will always fight to preserve,” Alabama Gov. Robert Bentley said. “I will not place Alabamians at even the slightest possible risk of an attack on our people.”

The GOP governors may not be in a positon to keep Syrian refugees out of their states, though.

The Supreme Court has confirmed the U.S. Constitution gives the president authority over immigration issues. In addition, the Refugee Act of 1980 gives the president authority to admit refugees who face “persecution or a well-founded fear of persecution on account of race, religion, nationality, membership in a particular social group, or political opinion” into the United States, especially when there is an “unforeseen emergency refugee situation.”

The Obama administration has said that it intends to allow about 10,000 refugees from Syria into the country.

“I think it would be a real mistake to say that we can protect our country simply by shutting our doors on refugees from one country,” Murphy, a member of the Senate Foreign Relations Committee, said on Monday. “The reality is that many of the attackers in Paris were European citizens, and those who want to do harm to our country have come from a variety of places across the globe.”

“Our focus really needs to be on having a vetting process and a background checks system that is as airtight as possible for everyone,” he said. “t would be misguided from a moral standpoint — and a strategic standpoint — to cut off all resettlement of Syria refugees, many of whom are women and children fleeing from the same terror and persecution we’re currently combatting.”

Blumenthal said, “Most refugees seeking asylum in the United States today are simply seeking to escape brutal violence and persecution”

“We need to make sure we have a strong and effective screening process to identify anyone who poses a risk to our security, but we should not ignore the humanitarian crisis that is underway,” the senator added.

Esty said, “We’re still in the investigation phase and really need to understand what happened to have an appropriate response.

“My office has been in touch with the State Department to seek additional information on its vetting process for Syrian refugees,” she said. “We do know that multiple federal agencies are conducting enhanced reviews of all Syrian refugee cases to identify potential national security concerns while granting asylum to the most vulnerable candidates fleeing violence and terrorists.”

The United States has admitted fewer than 2,000 Syrian refugees this year.

Refugees from all nations are scrutinized much more closely than any other newcomer to the United States.

Screening of a potential refugee, which happens before an application for resettlement is approved or rejected, includes health checks, biometrics verification of identity and intensive biographical and background screening.

On Monday, Obama, who is at a G-20 meeting in Turkey, said the United States would continue to accept more refugees from Syria and elsewhere, though “only after subjecting them to rigorous screening and security checks.”

“Slamming the door in their faces would be a betrayal of our values,” the president said. “Our nations can welcome refugees who are desperately seeking safety and ensure our own security. We can and must do both.”