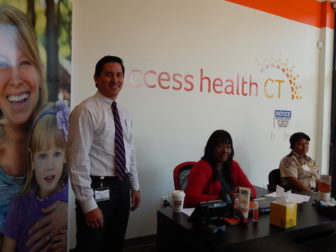 More than 5,400 new customers have bought private insurance through the state’s health insurance exchange since Nov. 1, a group that includes a larger share of young adults and people who qualify for subsidized coverage than the current customer base.

Overall, exchange officials say 99,127 people are signed up for private insurance plans for 2016. That figure includes many current customers – as many as 60,525 households, some of which include more than one person – who are slated to be automatically renewed into their current plans in December. It’s not clear how many people actively selected plans.

The open enrollment period for individual-market insurance coverage began Nov. 1 and runs through Jan. 31. Officials at the exchange, Access Health CT, say their target is 105,000 to 115,000 customers in 2016 for the private insurance plans sold through the marketplace. Just over 110,000 people signed up for private plans through Access Health during the 2015 open enrollment period, although the number of enrollees has since dropped to about 95,500.

Who are the new customers and what plans are they picking?

Based on an Access Health analysis of the new customers – defined as those who have signed up since Nov. 1 and who were not enrolled in an Access Health plan or Medicaid as of Oct. 31 – the new group skews younger than the existing membership.

It’s not clear whether those who signed up in the first weeks of open-enrollment will be representative of the full group that will sign up during the three-month sign-up period.

A larger share of the new customers qualify for federally subsidized premiums and cost-sharing compared to existing customers, although exchange officials expect that might decrease over time. Among the new group, nearly two-thirds qualify for plans that come with both federally subsidized premiums and out-of-pocket costs when getting care, which are only available to people whose income is below 250 percent of the poverty level. Just under half of current members qualify for those plans.

Robert Blundo, director of technical operations and analytics at the exchange, said an increased rate of new customers qualifying for both types of subsidized plans is expected, and likely to drop, because the initial eligibility determination is based on information people provide about their income. Typically, the income verification process determines that some people have higher incomes than they initially reported, leading them to qualify for lower levels of subsidies, or none.