Malloy calls ‘lockbox’ vote a milestone, not a setback 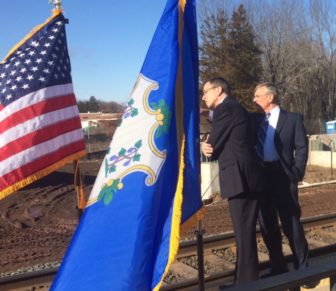 What do you say when your pitch for a constitutional amendment protecting transportation revenue is strongly endorsed by the General Assembly, just not by the three-fourths margin necessary to place it before the voters in 2016?

“This is a victory,” Gov. Dannel P. Malloy said Wednesday. “It’s not a hundred-percent victory, but it’s a victory.”

Passage of a constitutional “lockbox” is a prerequisite to Malloy’s eventually seeking additional revenue for his ambitious transportation infrastructure plans, and failure to win passage in 2016 could complicate any debate in 2017 over tolls, fuel taxes or other dedicated transportation revenue.

But the governor has time. A study panel is not expected to make recommendations about new sources of transportation funding until next year, and the legislature is unlikely to consider a vote on any tax increases until after the 2016 elections.

Malloy, a second-term Democrat trying to leave a legacy of long-term transportation improvements, said he sees the vote Tuesday by the General Assembly as progress, given the reluctance of legislators in his own party to take any steps that might restrict the uses of revenue.

“I don’t think it’s a complication. I think it really is a milestone,” Malloy said.

The Senate voted unanimously for the constitutional amendment, while the vote in the 151-member House vote was 100 to 40, with 11 absences. To reach the three-fourths threshold, Malloy needs 114 votes in the House.

The quickest path to passage of a constitutional amendment is hitting a three-fourths vote in both chambers, which would allow a referendum on ratification at the next statewide election, which is 2016.

An easier, if slower, route is a passage by a simple majority in successive years, which would place the measure on the ballot in 2018.

The Malloy administration has a third option: Try to get a three-fourths vote next year for a new version of a lockbox amendment, which also could get the question before voters in November 2016.

The administration has not said if it will press for another vote when the General Assembly begins its next regular annual session in February, but the governor made clear that Tuesday could be seen as a promising test vote.

He only lost three Democrats in the House, and there are votes to solicit among the 10 Democrats and one Republican who were absent Tuesday.

“I think that’s remarkable,” Malloy said of the Democratic vote. “So, we have a vote. There will be other votes.”

The challenge next year would be to propose revisions that might attract more Republicans, who generally want to see a lockbox with tighter restriction, without losing Democrats fearful of losing discretion over the budget.

Five freshman Republicans from eastern Connecticut who voted against the measure Tuesday released a lengthy statement Wednesday outlining what they saw as flaws in the amendment:

“This bill failed to define the source of revenue coming in, allows diversions before the money even gets to the fund, and even allows the legislature to continue adding expenditures. That means when state budgets get tough, the legislature can simply vote to raid the ‘lockbox’ again.  Effectively, this allows the legislature to shift money from one pocket to the other as a way to balance a budget without having to actually reduce state spending.

“If we are truly serious about fixing Connecticut’s failing infrastructure, we must take a strong stand on principle and stop obfuscating the truth under the guise of action. We need to stop playing games and create an enforceable transportation lockbox. The bill before the legislature did not do so.”

The statement was signed by Reps. John F. Scott of Groton, Mike France of Ledyard, Kathleen McCarty of Waterford, Aundré Bumgardner of Groton and Doug Dubitsky of Chaplin.

Malloy said he was encouraged that the GOP minority leaders, Sen. Len Fasano of North Haven and Rep. Themis Klarides of Derby, voted for it. He didn’t rule out changes, but suggested that opponents keep an open mind.