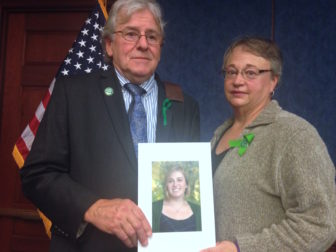 Gilles and Joyce Rousseau, father and stepmother of Lauren Rousseau, a teacher slain in the Sandy Hook Elementary shooting, hold her picture in Washington Thursday.

Washington – What was once the “Sandy Hook effect” has become the “San Bernardino effect,” the public and political reaction to a horrific mass killing that results in calls for more federal oversight of gun sales.

Thursday’s Capitol Hill commemoration of the anniversary of the Sandy Hook shooting, which occurred three years ago on Dec. 14, was also a memorial  to the victims of the San Bernardino massacre – and to dozens of other victims of gun murders across the nation.

Family members of victims of gun violence, including some from Newtown, repeated their calls for Congress to act on expanding FBI background checks to gun sales by individuals and barring the sale of guns to people on the “terrorist watch” list, who are suspected of having links to terrorists.

Attempts to pass those measures in the Senate failed last week.

On Thursday Governor Dannel P. Malloy announced  he wanted to use his executive powers to deny gun permits in Connecticut to those on the terrorist watch list. The list has been compiled by U.S. intelligence agencies and is considered classified.

“We have to have hope,” said Joyce Rousseau, stepmother of slain teacher Lauren Rousseau.

He may be right.

House Minority Leader Nancy Pelosi said Thursday she has pressured GOP leaders to include a policy rider on a massive budget bill that would repeal the “Dickey amendment,” a 19-year-old ban that has kept the Centers for Disease Control from funding studies of gun violence.

“That’s what we’re putting on the table today,” she said.

The National Rifle Association had set its sights on the CDC for its increasingly assertive studies on the effects of gun ownership on public health.

So former Arkansas Rep. Jay Dickey won approval of the resolution, which says that “none of the funds made available for injury prevention and control at the Centers for Disease Control and Prevention may be used to advocate or promote gun control.”

The Dickey amendment cowed the CDC into abandoning all studies on gun violence.

Dickey now says his amendment has been misinterpreted and was not meant to stop all research into gun violence. He wishes Congress would repeal it.

Since Dickey has “recanted,” GOP leaders should agree to her demand, Pelosi said.

“This is very important, and it should have bipartisan support,” she said.

Sen. Richard Blumenthal, D-Conn., said, “If the CDC were prohibited from collecting information about Ebola, think of the outrage.’

Congress’ inaction on gun control was the target at Thursday’s press conference by the families of victims of gun violence and their congressional allies.

Rep. Robin Kelly, D-Ill., asked, “Who has to die, their mothers, their children?’

“You have to do something to show you care,” said Sen. Chris Murphy, D-Conn. “It could be you next.”

Rep. Elizabeth Esty, D-5th District, who represents Newtown in Congress, said, “Congress is elected to lead and to do what is hard, not to do what is easy.”

“This past week, we were denied over and over again a vote on common-sense legislation,” she said.

House Democrats, including Esty, have used parliamentary tactics to disrupt the GOP legislative schedule this week and pressure Republicans to allow a gun safety bill on the floor. The efforts have not borne fruit.

“I think we have moved forward; we’ve gotten a vote on the Senate floor,” Soto said.

To him, it doesn’t matter if the measure failed. He says he’s in the fight for the long run.

“Our loved ones aren’t here to fight so we have to be their voices,” Soto said.

Like many victims of gun violence, Soto has made multiple trips to Washington to lobby Congress.

So has Gilles Rousseau, who said it’s possible to get the support of NRA members who back the modest gun control measures the families of shooting victims are promoting .

But he realizes the leadership of the NRA has enormous influence on Congress and have pushed back on any attempt to change federal or state gun laws.

“Their feeling is if we are given an inch, we will take a mile,” Rousseau said.