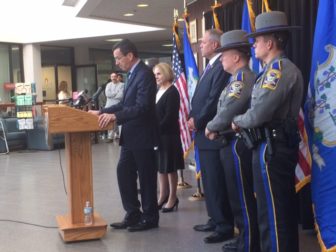 Middletown — Gov. Dannel P. Malloy demonstrated one of the first rules of modern politics Thursday: If you have good news, get it out. And he says it looks like the news on crime in Connecticut is continuing to be good.

The official FBI crime report for 2015 won’t be out until September, but the governor released preliminary data showing an estimated 9.2 percent drop in crime last year. In 2014, the crime in Connecticut hit its lowest point in at least four decades.

Malloy’s release of the preliminary statistics during a press conference at the Department of Emergency Services and Public Protection gets the data out before the General Assembly convenes in February.

Earlier, the state raised the age of adult criminal responsibility from 16 to 18. Malloy would like the age raised once again, at least for less serious crimes, to 21.

“I think we are seeing the results of groundbreaking reform in our own state,” Malloy said. “So I think that there’s nothing in the numbers that we have seen over the last five years that should dissuade us from moving forward.”

Malloy said the state was anticipating fewer than 100 murders for the third consecutive year, which hasn’t happened since the 1960s.

The preliminary data is based on statistics from 100 of the state’s 169 towns, including all the larger cities and towns that generate the bulk of crimes reflected in the annual Uniform Crime Report compiled by the FBI, Malloy said.

The state must submit final numbers in March, and the FBI generally releases its national report on crime in September.

In a study published a year ago, the Brennan Center for Justice called the 20-year reduction in crime “one of the nation’s least understood recent phenomena.”

Criminologists generally give some credit to the now-discredited boom in prison construction in the U.S., but the consensus is that incarceration increase eventually became counter-productive.

As he did last year, Malloy once again stressed that Connecticut’s drop is exceeding national and regional averages.

“We must be doing something right,” he said.

Malloy held a press conference the previous day in East Lyme to announce the closing of the Niantic Annex, the fifth correction facility closed since 2010, reflecting the falling rate of incarceration.