Obama puts CT accomplishments on national ‘to do’ list

As the president spoke, Gov. Dannel P. Malloy listened in the House gallery as a special guest of first lady Michelle Obama. The White House had invited Malloy because of his passage of his progressive agenda, including tougher gun control measures, raising the minimum wage and requiring paid sick leave for workers.

But the president’s speech did not focus on a laundry list of proposals. Instead he spoke broadly of the things the country needed to do to secure its future, its security, its economic health and its special brand of democracy. 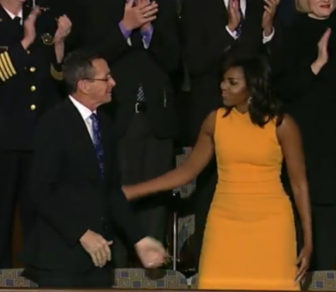 Gov. Dannel Malloy is greeted by First Lady Michelle Obama as she enters the gallery.

“The things happening in Connecticut — our efforts to prevent gun violence, to raise the minimum wage, to be the first state to raise the minimum wage to $10.10 and pass paid sick days, to sweeping criminal justice reforms — are being recognized,” Malloy said in a statement. “We are acting when other states are not, and we are on the cutting edge of emerging policy trends.  We have embraced much of President Obama’s agenda — and we have been successful as a result.”

Rep. John Larson, D-1st District, said Malloy and Obama “share a special bond” because of the tragedy at Newtown, where 20 children and six staff members were shot at Sandy Hook Elementary School.

Obama rushed to the scene of the tragedy that occurred on Dec. 14, 2012, which he called “the worst day of my presidency.”

Larson said Obama admires Malloy for his “excellent administrative skills and determination, as well as the governor’s loyalty to the Democratic Party. Malloy is the new head of the Democratic Governors Association.

Larson said the men have similar political assets, but different dispositions. “Governor Malloy has a lot of strengths, but his bedside manner isn’t one of them,” Larson said. “Obama has the ability to bring people along.”

Most Democratic lawmakers, including those who represent Connecticut in Congress, agree with Obama’s agenda. But some, especially the most progressive, have split with the president on the issue of the new Trans-Pacific Partnership, a trade pact between the United States and 11 other Pacific Rim nations.

“With TPP, China doesn’t set the rules in that region, we do. You want to show our strength in this century? Approve this agreement,” the president said.

Rep. Rosa DeLauro, D-3rd District, is a leader of opposition to the TPP,  a campaign kicked off by Democratic lawmakers and organized labor leaders at a press conference on Monday.

“We know TPP is too dangerous for us simply to stand aside and let it pass,” DeLauro said at that press conference.

However, the president mentioned few policy initiatives, in his speech, saying he “wanted to go easy on the traditional list of proposals for the year ahead.”

Sen. Chris Murphy, D-Conn., said Obama’s last State of the Union speech was “totally different than any other I’ve heard before.”

“In a way, he was speaking directly to the American people, over the heads of Congress,” Murphy said.

Murphy, who sits on the Senate Foreign Relations Committee, also said he was impressed by the amount of time Obama spent on foreign policy.

“I believe he was afraid of the way (GOP presidential candidates) Ted Cruz and Donald Trump talk is going to make us less safe,” Murphy said.

Obama said the United States’ answer to world problems “needs to be more than tough talk or calls to carpet bomb civilians. That may work as a TV sound bite, but it doesn’t pass muster on the world stage,” he said.

Malloy, interviewed later in the evening on MSNBC, said, “I have to tell you, it was the most mature conversation any president has had about terrorism for a long, long time, maybe forever. It was the most mature conversation that any president has had about our body politic and the destructive nature of those politics that any president has even dared to have. I loved it. At one point I kind of reached over to the first lady and in a positive way I said, ‘Is this Professor Obama?’ Because it really was conversational. He was getting it off his chest. He needed to get it off his chest.”

MSNBC host Rachel Maddow asked Malloy if he was or would like to be in the running for the Democratic vice presidential nomination.

“I hope not,” Malloy said. “I thought you liked me. That’s a tough job. If Biden would do it again, I’d give it to him, to tell you the truth. That’s not what interests me. I enjoy being governor.”

“My thoughts went back to that excruciatingly cold day when the president was first elected,” Blumenthal said. “Clearly there has to be a lot of work to be done on his vision.”

Yet Blumenthal said Obama “has accomplished more than perhaps he gets credit for,” and laid out a blueprint for the fulfillment of the rest of his agenda in Tuesday’s speech.

Rep. Elizabeth Esty, D-5th District, who represents Newtown in Congress, and former Rep. Gabby Giffords, an Arizona Democrat who was gravely wounded by a gunman five years ago, arranged to sit together.

Giffords is now a gun-safety advocate, as is Esty.

Obama hugged and kissed both women as he made his way to the podium for his speech.

Esty was pleased Obama raised the issue of gun violence in his speech and by the decision to invite Malloy and Ryan Reyes, whose partner, Larry “Daniel” Kaufman, died in the mass shooting in San Bernardino last month.

“I think it’s right to bring (gun violence) up because it’s going to be a long struggle,” Esty said.

Rep. Jim Himes, D-4th District, said he was glad Obama called for “more and better innovation” in his speech.

“Connecticut’s future economy is all about innovation,” Himes said.

He also said he “loved [Obama’s] focus on politics,” and the need for civil political discourse.

“I was glad that President Obama used the occasion of his final State of the Union as a call to ‘fix our politics’ and recognizing that we ‘don’t have to agree on everything’ to get something done,” Courtney said.

He said Obama should have given “the part of the speech that focused on national security after the Paris attacks.”

Each lawmaker was able to invite one guest to sit in the galleries and witness the speech. And like the Obamas, most lawmakers invited someone that represented their accomplishments, interests and priorities. 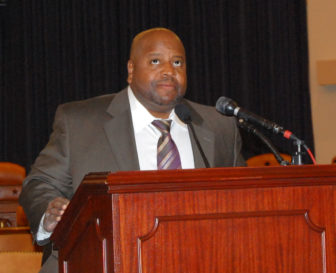 James Tillman at a press conference before attending Tuesday’s State of the Union address.

Larson invited James Tillman, who served 18 years in prison for rape before he was acquitted by DNA evidence.

For Tillman, this was not only the first time he was in the House galleries for a State of the Union speech, it was his first time in Washington, D.C.

“I’m energized and honored to be here,” he said.

Tillman’s case prompted Larson to sponsor legislation, with Rep. Sam Johnson, R-Texas, that would make compensation awards given to the unjustly convicted free of federal taxes. That legislation is now law.

Tillman received $5 million from the state of Connecticut, but said it was subject to a 28 percent federal tax.

“This will help me and help thousands of wrongfully convicted guys,” he said.

Esty invited New Britain Police Chief James Wardwell, who is at the front lines of the fight against heroin trafficking and addiction in her district.

“There’s no reason for folks to die” of overdoses or gun trafficking violence,” Wardell said.

In his speech, the president mentioned the need to battle prescription drug abuse, which leads many to heroin.

Murphy invited Mark Barden, the father of Daniel Barden, a child killed in the Newtown shootings.

Blumenthal, a member of the Senate Armed Services Committee, kept his tradition of inviting those who serve, or have served, in the military to the State of the Union address. This year it was retired Marine Lt. Col. Mike Zacchea of Brookfield, who has been decorated with the Purple Heart and two Bronze stars for his service in Iraq.