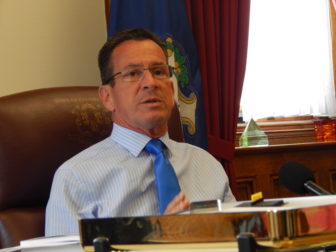 Gov. Dannel P. Malloy has ordered the state Department of Public Health to postpone until next year any final decisions on certain hospital transactions – or reject them if state law requires a quicker decision – while a newly created task force examines the state’s oversight process for transactions and other major changes involving hospitals.

The executive order, issued Thursday afternoon, is expected to most directly affect the proposed affiliation between New London’s Lawrence + Memorial Hospital and the Yale New Haven Health System, which has generated significant scrutiny from labor unions and some community groups. It could also affect Hartford HealthCare, which announced plans Thursday to explore a possible affiliation with Charlotte Hungerford Hospital in Torrington.

It would not affect other proposed changes in hospital ownership involving Rockville General, Manchester Memorial, Waterbury and St. Mary’s hospitals.

The order applies to transactions that could lead to a health system with operating revenues that account for more than 20 percent of operating revenues of all hospital health systems in the state, based on figures from the 2014 fiscal year reported by the Office of Health Care Access. Both the Yale and Hartford systems exceed that threshold now, while the other hospitals involved in acquisitions or affiliations fall well below that limit.

The growth of large hospital systems in Connecticut, as well as the state’s process for overseeing transactions and other changes health care, has drawn significant scrutiny in recent years as many hospitals have sought to join bigger organizations.

Some legislators, unions and advocacy groups have raised concerns about the ability of large health systems to raise prices and reduce patient choice, while hospital officials say consolidation is the result of both federal policies that favor larger systems and the need to adapt to reduced reimbursement rates from Medicare and Medicaid and other financial challenges.

At the same time, the state’s mechanism for addressing changes in health care, known as the certificate-of-need process, has drawn renewed attention from policymakers, some seeking more regulation and some seeking less.

There’s a push this session by some legislators to require hospitals to get state approval before they can reduce staffing levels for certain services by more than 50 percent – a response to Hartford HealthCare’s move last summer to convert the 12-bed critical care unit to a four-bed progressive care unit at Windham Hospital, one of five hospitals owned by the system. The state regulator, the Office of Health Care Access, determined the change did not require a certificate of need.

But other legislators say the certificate-of-need process, which also governs whether hospitals can purchase certain medical equipment or open certain types of facilities, is too restrictive and stifles competition by making it harder for health care providers to offer new services.

“We’ve been taking a piecemeal look at the certificate-of-need process for several years. It’s time for comprehensive reform,” Malloy said in a statement. “With continuing changes in the health care industry, it is critical that our state laws ensure that all hospitals continue to thrive, and that the deck is not stacked in favor of fewer than a handful that dominate the marketplace. We need balance. Fewer health care systems mean fewer choices for consumers, and that can dramatically affect both the quality of care and costs. It’s time we take a holistic look at the acquisition process.”

The executive order creates a task force, led by Lt. Gov. Nancy Wyman, to review and analyze the current certificate-of-need process and whether changes are needed. The task force will be charged with identifying challenges and gaps in the state’s efforts to regulate health care services and facilities, and recommending ways to improve them. The group has until Dec. 1 to report on its findings.

In addition to hospitals, the certificate-of-need process applies to nursing homes, some outpatient medical facilities and physician practices.

In calling for the delay in decisions on certain certificate-of-need applications until Jan. 15, 2017, Malloy said it would “provide the necessary time for a fair and thorough evaluation of the CON process.”

The certificate-of-need process includes certain timeframes for action, and the executive order calls for the delay “insofar as permitted by law.” But if the state Department of Public Health – which includes the Office of Health Care Access – must act sooner on a proposal that would otherwise be subject to the delay, Malloy’s order would require the proposal be rejected.

“Hospitals are such an important and critical part of the economy. We’re hoping that this doesn’t have a long-term impact or doesn’t create any type of irreparable harm,” he said.

Asked if the health system had recourse, Petrini said, “We’re assessing it.”

O’Farrell, the Lawrence + Memorial spokesman, said the Office of Health Care Access already has the tools needed to evaluate certificate-of-need applications. He  added that Malloy’s policies “created the very conditions that are fueling the need for community hospitals to become larger regional or national systems,” including a tax added in the first year of Malloy’s administration that now collects hundreds of millions of dollars from hospitals each year.

“Hospital integration is part of a shift to adjust to health care sector changes, including the impact of health care reform,” the association said. “Health care reform requires hospitals to find new strategies to reduce the cost of care by operating as efficiently as possible while providing excellent, integrated quality care.”

A Hartford HealthCare spokeswoman said it was too soon to comment, but that the organization “will be looking closely as this unfolds.

She said cuts at Windham Hospital have led some people to have to travel to Hartford or Norwich for basic health care services – a burden in an area with limited transportation options, she said – and noted that the cuts occurred without the public’s being able to weigh in before regulators.

“Health care is a rapidly changing landscape in our state and across the country. Being more cautious with changes as a result of this task force and this process being evaluated I don’t think is a bad thing,” she said. “Given what’s happened in our community in Windham, I’d hate to see that happen someplace else, and this will potentially prevent that.”

AFT Connecticut, which represents workers at Windham and Lawrence + Memorial Hospitals and has called for expanding the certificate of need regulations, also praised the executive order. “The proposed task force is an opportunity to take an honest look at whether these and other consolidations are actually serving the needs of patients, caregivers and communities,” President Jan Hochadel said.