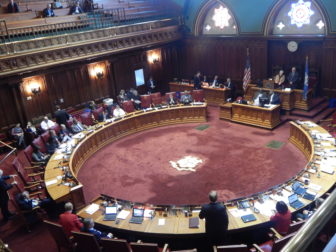 The chamber of the Connecticut State Senate

Underscoring the fiscal crisis facing Connecticut, the Judicial Branch canceled employee raises Thursday and the General Assembly opened talks about the furloughs of legislative staff, a rollback of its staff raises, and a rare rejection of a negotiated contract for unionized employees.

The Senate Democratic majority has begun discussions with the Office of Legislative Management about furloughs and a reversal of a July cost-of-living raise for legislative staff, said Adam Joseph, a spokesman. Either option would have to be done in cooperation with the other three legislative caucuses.

The Supreme Court decided to cancel 3 percent raises for about 700 non-union judicial staff set to take effect Friday, saving $1 million in this fiscal year and $2.9 million next year. Judges, whose salaries are set by the legislature, do not have any pay increases pending.

Senate leaders also informed senators to clear their schedules for Friday and Monday for a likely vote to reject a contract granting raises to non-teaching professional staff at the University of Connecticut.

“We are planning a session to consider the contract,” Senate President Pro Tem Martin Looney of New Haven told reporters at his Capitol office Thursday afternoon.

Looney declined to say whether there are enough senators who plan to vote against the contract to block it.

Labor in the crosshairs as budget crunch worsens

“At this point we wouldn’t want to characterize it until we have finalized it all, but we are pushing forward on that piece,” he said of moving forward with an up-or-down vote.

With looming deficits facing the state, Looney said, the pending contract is “unsustainable”.

That contract would guarantee staff pay raises between 3 percent and 4.5 percent in each of the next five school years. A portion of those increases is linked to a requirement that the work week increase from 35 to 40 hours. The agreement also would allow staff to work less than half time for up to three years and still count those years toward pension calculations. The employees also would still receive their normal vacation and holiday pay.

The raises would cost $93.9 million over the next five years, nonpartisan fiscal analysts estimate.

Senate leaders said Thursday they see the raises as unaffordable. The contract needs to be rejected by March 9 by either chamber of the General Assembly or it is automatically deemed approved. 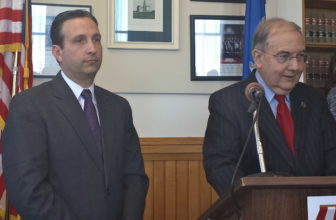 “It seems likely that the contract, as constructed, would result in both more layoffs because the cost of the contract as a percentage of UConn’s block grant would increase as time goes on, leading to more layoffs, and also perhaps higher tuition and fees for UConn students,” Looney said.

The canceled pay raises for 700 non-union Judicial Branch employees for the current fiscal year are the third set of raises to be rescinded in the last two weeks. The governor canceled raises for nearly 2,000 executive branch non-union employees earlier this week, and the state’s largest public college system – Connecticut State Colleges & Universities – deferred raises for its 300 non-union staff the week before.

“The ongoing and, in fact, worsening fiscal crisis in the state is the cause of the cancelation,” Judge Patrick L. Carroll III, the chief court administrator, wrote Judicial Branch employees Thursday. “These are extraordinarily difficult fiscal times and it is certain that even harder times lay ahead.”

Carroll said he and Chief Justice Chase Rogers appreciate the labors of the court system’s staff.

“I assure you that we would have moved forward with the planned increase if it was at all possible,” he wrote.

The governor’s office is pleased with these developments.

“A new economic reality means that we need to budget and act based on the dollars we actually have – not the dollars we want to have,” Malloy spokesman Chris McClure said. “These steps help take us in the right direction, and we appreciate this decision. As always, we deeply value the work of those who serve the public.”

Senate Minority Leader Len Fasano, R-North Haven, said his caucus is open to discussing labor savings to cut legislative branch operating costs. “We need to look at everything and that would include non-union and union” positions.

But Fasano also said that Republican minorities in the Senate and House have been calling for the past several years for tighter controls on overtime, benefit reforms and other structural changes to reduce labor costs across all of state government. Until now, those ideas “were rejected out of hand,” by Democrats, he said. “Clearly there would be a lesser deficit now if we had done these things years ago.”

Pat O’Neill, a spokesman for the House Republican Caucus, said the caucuses have talked before about ordering furlough todays to reduce labor costs.

House Speaker J. Brendan Sharkey’s office did not comment for this story.