“Please be advised that I have asked the Department of Social Services to hold on making any additional supplemental payments … until we have identified the steps needed to address this fiscal year’s budget deficit,” Office of Policy and Management Secretary Benjamin Barnes, Malloy’s budget director, wrote Wednesday in a memo to hospitals. “While I hope to have this task completed later this month, due to the significant drop in revenues, I am not optimistic that we will be able to move forward with any further state payments this fiscal year.”

This marks the latest swing in an unusually volatile state funding plan for hospitals this fiscal year.

The industry originally was budgeted to pay $556 million in taxes and receive $256 million in reimbursements, either through a limited pool for small hospitals or a broader program for all facilities.

In mid-September, responding to a weak stock market, the administration cut payments to hospitals and withheld others. At that point, the industry expected to receive just $64 million back against $556 million paid to the state.

In a December special session, legislators reversed some of the September cut and reached an understanding with Malloy to release withheld payments — all of which elevated this fiscal year’s payments to the industry to $164 million.

The latest action by the administration suspending about $140 million in payments now leaves hospitals slated to receive $22 million in tax reimbursement payments this fiscal year — or just 4 percent of what they will pay. 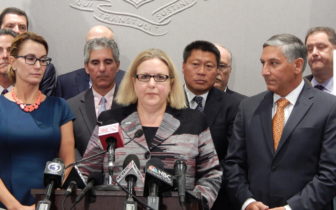 The administration was responding to last week’s projections showing badly slumping state income tax receipts. According to the legislature’s nonpartisan Office of Fiscal Analysis, anticipated revenues have been lowered by almost $200 million for this fiscal year, and by $350 million for 2016-17.

Nonpartisan analysts are projecting general fund deficits of $266 million for this fiscal year, a gap of just under 1.5 percent, and about $900 million, or 5 percent, in 2016-17.

“What alternative cuts to social programs are being proposed to offset any restoration of these funds?” Malloy spokesman Chris McClure said Thursday. “Leadership is about choices. Do you cut from social programs that serve those who need it most, or do you cut from hospitals that are seeing soaring profits? You cannot be for all things, all the time. As the governor has said repeatedly, if there are concrete ideas that are better, they should be put on the table.”

But the Connecticut Hospital Association argued the governor’s actions would harm Connecticut’s patients and its economy.

“We are outraged by the governor’s refusal to pay hospitals for care provided to patients,” Jennifer Jackson, the association’s CEO, said. “His actions are breaking the health care system and increasing costs for patients.

“First, of course, because it makes it increasingly difficult for us to make investments in programs and services that benefit those we serve, especially the most vulnerable,” he said. “But also because it shows the enormity of Connecticut’s continuing fiscal crisis.”

“Hospitals are struggling to meet their core functions and serve the neediest in their host communities and surrounding towns,” said House Minority Leader Themis Klarides, R-Derby. “Typically they are the largest employers anywhere, and this added bad news will only make things worse.”

“While our state scrambles to clear up the mess that failed Democrat policies created, that same party has decided to hold hospitals hostage and push more burdens onto patients,” said Senate Minority Leader Len Fasano, R-North Haven. “This ill-advised decision is skirting a core responsibility of government to care for those most in need.”

The provider tax has been a growing source of controversy since 2013 — one year after Malloy and the General Assembly imposed it on hospitals to leverage more federal aid for Connecticut.

The industry originally paid $349 million in provider taxes in the 2012-13 fiscal year, and received $399 million back from the state. This back-and-forth arrangement enabled Connecticut to qualify for about $200 million in federal Medicaid payments, allowing state government to come out ahead as well.

But tax reimbursement payments gradually were reduced each year after that — a trend that prompted criticism from both sides of the aisle that Connecticut was forfeiting hundreds of millions of dollars in federal assistance.

And the hospital association said the gradual evolution of this tax from a tool to tap federal dollars into a very real burden on hospitals has taken a heavy toll.

More than 3,000 hospital jobs have been lost in Connecticut since 2013, Jackson said, adding that “the governor’s actions are further damaging our already fragile economy.”