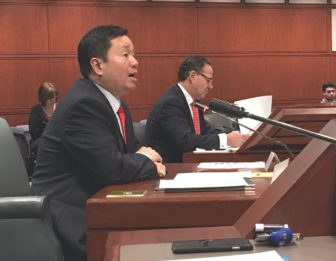 State legislators have reached a compromise they hope will ease a dispute over transparency at the University of Connecticut Foundation.

A bill, introduced in the higher education committee, would require the foundation to submit a detailed annual financial report to the state legislature that would become a public record.

Under the legislation, the foundation still would not be fully subjected to state freedom of information laws and would not have to disclose the names of donors.

The foundation is a nonprofit entity that serves as the university’s fundraising arm and manages a $383 million endowment. It raised $78 million last year, according to UConn Foundation President Joshua Newton.

UConn provides funding to the foundation to conduct its fundraising efforts. The university gave the foundation $8 million last year, about 45 percent of its budget.

The annual report to the legislature, which would be submitted to the higher education committee, would include the foundation’s audited financial statements and information about how funds are being disbursed to the university.

The foundation would be required to report the total number and average size of the disbursements to each school and college at the university in four categories: undergraduate and graduate scholarships, fellowships and awards; program and research support; equipment; and facilities construction, improvements and related expenses.

The university requests disbursements from the foundation on an as-needed basis, meaning the data would indicate how often and how much the foundation is giving to each school and college.

The bill would not require disclosure of individual payments, only the average amount of the disbursements in specified categories.

“The bill under consideration has the potential to resolve the discord and return the focus to philanthropy,” John Malfettone, a UConn Foundation board member and donor, said at a Higher Education Committee public hearing Tuesday.

UConn Provost Mun Choi told legislators the bill strikes the right balance between maintaining the privacy of donors while allowing for “appropriate oversight” of the foundation. The balance, he said, would give the UConn Foundation the freedom to continue “aggressively fundraising.”

But some are concerned the legislation does not go far enough.

Sen. Michael McLachlan, R-Danbury, said in written testimony to the committee the legislation does not guarantee “the citizen’s right to know” where their money is being spent.

“I have long maintained that the operations of the foundation should be open to public scrutiny because state taxpayer money is provided to the foundation on an annual basis,” McLachlan said. “In order to achieve true transparency, all payments to UConn Foundation employees and UConn employees should be subject to FOI.”

McLachlan said he favors an opt-out system for donor information, where all donors and donations would be made public unless the donors opted to keep them private.

Sen. Danté Bartolomeo, D-Meriden, said during the hearing she was concerned Newton was “trivializing the public’s right to transparency” in his language and tone.

“I would just caution you in the future that that’s not the right way to approach us when you are asking us for $8 million a year (in taxpayer money), but you’re also asking that we do not require you to pass through FOI,” Bartolomeo said.

James H. Smith, president of the Connecticut Council on Freedom of Information, said he supports the legislation but sees it as “incremental.”

“It’s good to see that we’re going to make at least some of this information applicable to the Freedom of Information Act,” Smith told legislators. “I believe you all know the UConn Foundation is the only premiere university foundation in New England that is not subject to a state’s freedom of information laws.”

Smith said that because the foundation plays such a major role in supporting the university, it essentially functions as a public entity and should be entirely subject to freedom of information laws.

Under the legislation, university funding would begin decreasing when the endowment reaches $500 million. When it reaches $1.25 billion, the university will be required to stop all funding.

The bill also would require the foundation to direct at least 15 percent of the funds it raises annually to scholarships and grants. Newton said the percentage normally fluctuates, ranging from as low as 8 percent to as high as 20 percent in the past five years.

Last year, Rep. Gail Lavielle, R-Wilton, introduced a bill that would require all expenditures of the UConn Foundation to be made public. It died in committee despite bipartisan support.

This year’s legislation is the result of a compromise between officials from the state, the foundation and UConn, with Sen. Kevin Witkos, R-Canton, leading many of the discussions.

“I think we’ve done a fantastic job,” Witkos said. “It’s been a pleasure working with (Newton) over the past summer trying to create the bill.”