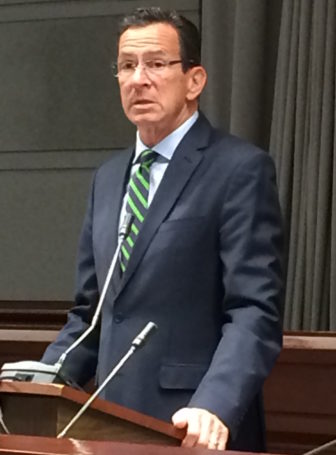 The governor also told the crowd of about 300 gathered for Connecticut Business Day in the Legislative Office Building to help him safeguard funds for the transportation improvements essential to future economic growth.

“We have come through a great storm,” the governor said. “We did some of the things we needed to do. But it’s quite clear we need to do a lot more to address what I think will be another, you know, five to six [years] to maybe even a longer period of time of adjustment after The Great Recession.”

Since this legislative session began in February, the governor has said Connecticut has entered a “new economic reality” that features less vibrant growth — particularly in the financial services sector — than on the period before 2009.

With nonpartisan analysts projecting a deficit of about $900 million in the fiscal year that begins in July — and shortfalls topping $2 billion in both 2017-18 and 2018-19 — Malloy has challenged legislators to attack these problems without turning to tax hikes.

“We need to live within our means, and since less money is coming in, less money can go out.” he said.

Further complicating matters, the current budget is on pace to finish $220 million to $266 million in the red when it ends on June 30.

Malloy asked legislative leaders Tuesday to help him identify spending cuts by Monday to close or at least mitigate that deficit.

“I’ve heard some grumbling that that’s not long enough to do it,” he said.

The governor already has taken heat from legislators for last week suspending $140 million in tax reimbursement payments owed to hospitals. He asked legislators Monday to consider more than $130 million in cuts across social services, higher education, municipal aid and various agencies, and also hinted he would order state employee layoffs before June 30.

“Everyone bemoans the cuts, although they agree I should cut,” the governor told business leaders. “The big part of the message that needs to be delivered to the legislature is, we have to stop doing business the way we always did it.”

The governor also made it clear that his fellow Democrats in the House and Senate majorities are not the only ones resisting this.

“Let me be bipartisan on this,” he said. “Republicans talk a lot about wanting to cut, but I’ve asked everybody to come to the table, and I’m not getting a whole lot more ideas from Republicans than I am from the Democrats.”

Previous budgets often were driven by the cost of maintaining existing programs, the governor said. He added that future spending should be limited by what the existing tax rates and overall revenue system will raise.

“That’s a sea change for a legislative body to actually move in that direction,” he said.

Fasano: GOP has been pitching cost-cutting ideas for a year

Republicans have objected to cuts Malloy ordered to hospitals and to social services, both last fall and earlier this month.

But they also have said Connecticut could spare these programs and still achieve hundreds of millions of additional savings by restructuring labor costs. This includes not only imposing much limits on agency overtime spending, but also seeking wage and benefit concessions from unions.

The administration and bargaining units are in talks right now to address expiring wage agreements. Malloy has not said whether he will seek to reopen the umbrella contract that covers health care and retirement benefits through 2022.

“The union heads — not the rank-and-file workers — have got a strong hold on this building,” Fasano said.

“How many more ideas does he (Malloy) want me to give?” Fasano said. 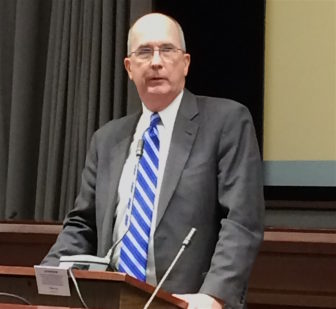 Joseph F. Brennan, president of the Connecticut Business and Industry Association, praised Malloy for his call to fiscal austerity. “What the governor has done, I think, is take the bull by the horns,” he said.

And while raising taxes this year “would be disastrous” for the economy, Brennan added, balancing the books with spending cuts “would send a message that Connecticut is going to be aggressive in making the state more competitive.”

Malloy also asked business leaders Monday to support his proposals to restructure the state’s pension systems. This would mitigate spiking pension costs through the mid-2030s, but also require the state to pay more for these benefits in the decade or two that follow.

And the governor also called again for business support for a constitutional amendment to create a legal “lockbox” to ensure revenues raised for transportation improvements can’t be diverted for other purposes.

“Unless we get that right, … we will be that economic cul-de-sac, because transportation is one of the great blocks we are experiencing in Connecticut,” he said.

Malloy added that Connecticut’s challenges, though significant, are not extreme, and that the state still has many assets.