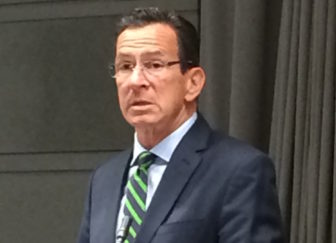 The measure will effectively prohibit nonpartisan analysts – but only in one high-profile report – from projecting all of the spending the state has committed to legally in future years and assessing whether Connecticut would have enough revenues to cover it.

But the measure places no restrictions on what the legislature can propose or adopt, nor will it prevent legislators from obtaining the material nonpartisan analysts cannot publish in their annual Fiscal Accountability report.

And the legislation will make it harder for the general public to track deficit forecasts similar to those that have plagued Malloy over the last four years — an effect that sparked criticisms from right-to-know advocates, the House chair of the budget-writing committee, and the top Republican in the House of Representatives.

“This is a critical, structural reform that changes how we will do business in the future, and it’s another step towards making the long-term reforms that we need to implement to be successful both now and down the road,” Malloy wrote in a statement.

The “reform” the governor proposed was wrapped into an omnibus policy bill approved in special session last week to help implement the new state budget.

Focus is on ‘current services’ budgeting

It directs the legislature’s nonpartisan Office of Fiscal Analysis and the governor’s budget staff to follow a different methodology when projecting budget trends — in reports each submits to the General Assembly annually on Nov. 15.

Since 2005, the Fiscal Accountability Act has required analysts to break down a wide array of current and future trends covering spending, revenue, debt and economic growth.

When it comes to projecting future costs, nonpartisan analysts use a “current services” methodology. In other words, they attempt to determine how much it would cost to maintain all services offered now, and to cover any programs promised in current law but scheduled to start down the road.

The governor says legislators, fueled by these estimates, are too resistant to spend below the “current services” mark. His staff stopped following this methodology in its Fiscal Accountability Report three years ago.

But these projections do more than simply apply inflationary increases to existing programs. They also track deferred costs — in some cases large amounts — threatening future budgets.

What changes under the law?

The new law says analysts only should focus on two things: how much revenue the current tax and fee structure is likely to raise in the future, and how much certain fixed costs — debt service, retirement benefits, Medicaid and federal mandates — will grow in the future.

Those fixed costs represent just 40 percent of General Fund spending. What’s left over, the governor says, is what legislators could spend without raising revenues.

Administration officials argue that the legislature routinely waives some spending increases promised in statute, and “current services” projections don’t reflect this practice. For example, measures requiring full funding for non-education grants to towns have been temporarily suspended in most budgets for more than a decade.

“Moving away from ‘current services’ will help us ensure that government does not continue to increase spending on autopilot. As part of the budget agreement, the state will change how it does business, and give residents and businesses the predictability they seek as government works to live within its means,” Malloy said.

But Rep. Toni E. Walker D-New Haven, co-chair of the Appropriations Committee noted the measure changes nothing about how the state “does business” when the legislature and governor craft a budget. 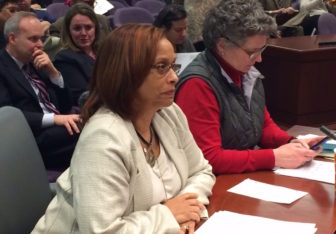 It imposes no limits on the spending officials can approve.

It doesn’t change what they can propose.

And it doesn’t even stop legislators from acquiring “current services” projections.

Nonpartisan staff still are required to develop estimates and issue projections in response to legislators’ questions at times other than in their Fiscal Accountability Report.

“If the governor wanted us to be more tuned in to this issue, to make us do more research, then he succeeded, and I thank him for that,” said Walker. The New Haven lawmaker supported and helped develop the budget but said she opposes the provision House and Senate leaders added at the request of the Malloy administration.

Walker also noted that getting “current services” estimates from analysts only offers information, and is not a directive. It didn’t stop legislators this month from adopting a $19.76 billion budget for 2016-17 that spends $1 billion less than the level needed to maintain current services spelled out in last November’s Fiscal Accountability Report.

So what really changes? The answer: only what analysts can publish in one public report.

Between 2012 and 2015, the Fiscal Accountability Report from nonpartisan analysts repeatedly warned that spending was on pace to grow faster than revenues.

Every November report from the legislature’s nonpartisan analysts during that four-year period — which covers Malloy’s entire tenure excluding his first year in office — projected finances were headed for a deficit immediately after the current budget expired.

Some of those deficit projections topped $1 billion, and Malloy’s Republican critics used those reports to batter the Democratic governor repeatedly in 2014 as he campaigned for re-election while stating, “We don’t really have a deficit.”

But now that analysts only can compare 40 percent of the budget against 100 percent of revenues — at least in their biggest, high-profile report — there is no deficit to forecast.

The administration defended its proposal last week by noting that the two leading Republicans who ran for governor in 2014, Tom Foley of Greenwich and former Sen. John McKinney of Fairfield, both argued that government cannot afford to maintain all services at current levels year after year.

But neither Foley nor McKinney proposed withholding that information from public reports.

And Malloy found value in at least one “current services” forecast during his first year in office. The governor spent much of 2011 citing the huge, $3.7 billion deficit he had inherited from Gov. M. Jodi Rell and the 2010 legislature to defend a major tax increase. That deficit was based on estimated current services costs for the 2011-12 fiscal year.

The Malloy administration did not address directly two questions posed last week by The Mirror.

How does restricting the contents of a public report — instead of proposing actual spending restrictions — significantly change the budget process?

And was the reporting change proposed to eliminate the budget deficit projections the administration has faced repeatedly in the past?

Malloy spokesman Chris McClure responded to both questions in writing.

“As the Governor has been saying since February, our state can no longer afford to exclusively budget on a current services model that routinely overstates the out-year projections because it is based on an expectation that spending will continually increase and assumes all policies stay in place and are funded the exact same way in perpetuity,” McClure wrote.

Although the administration has argued repeatedly that Connecticut “budget(s) on a current services model,” the budgets enacted in 2014, 2015 and this spring each appropriated less than the current services spending level projected the prior November.

“We must reform the way we budget in order [to] provide an accurate and realistic picture of the state’s finances – one based on actual revenue and actual expenditures – which will improve our state’s business climate, our prospects for the future, and state government’s ability to deliver services,” McClure continued. “To continue to rely on a model that produces results we know to be unreliable, simply out of habit, would be a disservice to the fine people of this state.”

‘Why would anyone want less information?’

But Klarides said there is no reason to stop analysts from warning legislators when current programs threaten to push finances into the red. 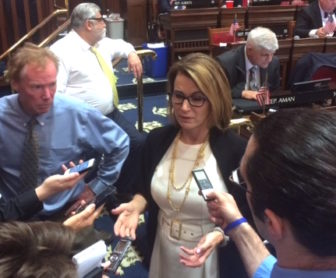 “Why would anyone want less information when it comes to forecasting budget trends, unless of course you wanted [to] keep bad news from the public, which is what the governor intends to do,” Klarides said. “It is amazing the lengths that this administration will go to restrict the free flow of information and the steps it intends to take to cloud transparency in government.’’

Walker also argued that without “current services” estimates, legislators cannot necessarily tell if the level of funding assigned to any program will result in changes, such as serving fewer people, or producing longer customer lines.

“We want full disclosure and transparency in the budget,” she said.

The Connecticut Council on Freedom of Information, a coalition of news organizations and other right-to-know advocates, also argued against the change.

“As a principle, government is based on budgets and money,” said CCFOI President Jim Smith of Oxford, who spent more than 40 years in top editor posts at eight daily newspapers in Connecticut, including The Courant and The Connecticut Post. “And democracy shouldn’t hide anything at all about the money that supports government. The people ought to know every nook and cranny about that money.”