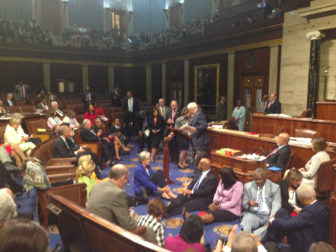 Rep. John Larson at the podium amidst fellow Democrats during the sit-in.

Republicans vying to unseat Connecticut Democrats say they are outraged by the attempt to raise political cash from what they characterized as exploitation of the mass shooting in Orlando earlier this month. Meanwhile, the Connecticut Democratic Party accused the GOP candidates of using their outrage to avoid taking a position on the gun-control legislation at the center of the controversy.

There’s no evidence any of the state’s Democratic lawmakers knew in advance of the state and national fund-raising appeals, although they could benefit from the state party’s effort.

The state Democratic Party sent out an e-mail petition during the Democratic seizure of the House floor last week. The petition did not ask for money, just a signature.

“Reps. Elizabeth Esty, Rosa DeLauro, Jim Himes, Joe Courtney, and John Larson along with Sens. Richard Blumenthal and Chris Murphy are all on the House floor right now as part of the sit-in. They’re fighting for us – let’s join them,” the petition said.

The signatures, several thousand, however, were sent to a state Democratic Party fundraiser and were used to solicit campaign donations, said Connecticut Democratic Party spokesman Leigh Appleby, although he stressed that the petition was aimed at building support for “real action” on gun legislation, not fund-raising.

The Democratic Congressional Campaign Committee also sent out solicitations during last week’s sit-in. But unlike the state party’s pitch – the proceeds from which could be put in a federal fund that can be used to support Connecticut congressional campaigns – the money raised by the DCCC is likely to be used to help more vulnerable candidates nationwide.

The DCCC’s attempt to raise money prompted House Majority Leader Paul Ryan, R-Wis., to diminish as a “fundraising stunt” the Democratic effort to force votes on bills that would expand FBI background checks of gun buyers and bar those on a federal terrorist list from purchasing a gun.

It also provoked a slew of attacks from the Connecticut Republicans vying for the seats of the Democratic lawmakers.

State Rep. Dan Carter, who is challenging Blumenthal,  was the first to use the fundraising to rough up his opponent, calling donations raised this way “blood money.”

“I know the Connecticut Democrat Party is desperate for contributions after being fined a record-breaking $325,000 for circumventing campaign finance laws, but raising money on the backs of innocent victims of terror is reprehensible,” Carter said in a campaign statement.

The Connecticut Democratic Party agreed to pay $325,000 to end a fight with election regulators over the use of contributions from state contractors into a federal account to support the re-election of Gov. Dannel P. Malloy in 2014.

A campaign spokesperson for Blumenthal said only that, “Senator Blumenthal is working for tougher laws to keep guns out of the hands of terrorists and criminals. Common-sense gun violence prevention and safety laws are his priority, as always.”

“We are asking people to sign a petition to support [the] entire congressional delegation’s monumental efforts to finally pass meaningful gun safety regulations, and we are proud that thousands of people throughout Connecticut have signed the petition,” he said.

The fundraising efforts also provoked blasts from the campaigns of Sherman First Selectman Clay Cope and Hartford businessman Matthew Corey, Republicans who are running against Esty and Larson, respectively.

Cope called the sit-in a “photo-op” for Esty. She was often seen in photographs of the sit-in behind Rep. John Lewis, D-Ga., who with Larson organized the protest.

“At a time when we should provide support and comfort to the families of the victims of the Orlando Pulse nightclub shooting, and press the FBI to provide detailed answers to lingering questions about its investigative protocols, Elizabeth Esty and her Democratic colleagues stage a sit-in/political photo op on the House floor to spur campaign fundraising,” the Cope campaign said in a statement.

Corey said, “John Larson and the entire Connecticut delegation wants to make this election about a single issue – gun violence. “

“Let’s see how much of the funds his party raised with this publicity stunt will be donated to the victims of the Orlando tragedy,” he added.

Craig Frucht, spokesman for the Esty campaign, said the lawmaker was unaware of the DCCC and state party fund-raising efforts and that “nobody is in danger because families are deciding to donate to a cause they believe in.”

“They’re in danger because Congress won’t do anything to stop terrorists and violent criminals from getting their hands on guns,” Frucht said. “Hardworking Americans across the country are fed up, and they’re doing what they can – whether it’s staging protests outside the U.S. Capitol, organizing vigils in their communities, or donating a few hard-earned dollars …”

Meredith Kelly, spokesperson for the DCCC, said, “The American people care about their safety, and their notable activism – which includes signing petitions, engaging on social media and making low-dollar donations – is a crucial part of democracy that empowers the American people to help bring new leadership to Washington.”

Larson and DeLauro, however, both said they regretted the DCCC fundraising appeals.

“”I wish they hadn’t,” Larson said at a press conference last week. “There was no conversation with members on the floor.”

The fundraising effort gave Republicans, who struggled to respond to the sit-in and a filibuster the week before by Murphy, a way to attack the Democratic push for gun control that riveted the nation.

But at least one Connecticut GOP candidate has not joined the campaign.

Daria Novak of Madison, who is running against Courtney, D-2nd District, has refrained from joining the GOP campaign.

He bashed Himes for his widely noticed refusal to participate in a moment of silence on the House floor after the Orlando massacre that claimed 49 lives.

“Himes’ histrionics are not only inappropriate, his current refusal to pause for a moment of silence stands in stark contrast to his eight years of silence on the broader issue,” Shaban said

Himes said, “I will no longer stand here absorbing the faux concern, contrived gravity and tepid smugness of a House complicit in the weekly bloodshed.”

House Democrats are in recess this week for the 4th of July holiday. But Connecticut lawmakers and many other House Democrats are holding gun-control related events in their districts, trying to keep up the momentum established by their sit-in. On Wednesday, they will hold a “day of action” in their districts to press for votes on the gun legislation.

A “skeleton crew” of Democrats are continuing their protest on the House floor, even though the chamber is in recess.

“We’re going to continue to use every tool that we have, whether it’s on the floor of the House of Representatives in Washington or in town meetings or sit-ins in community facilities throughout America to make this point that we deserve a vote. That’s not we Democrats, but the American people who deserve a vote and expect their Congress to keep them safe,” said  House Democratic Policy and Communications Committee Chair Steve Israel of New York.