Republican delegates ‘like Mike’ and rain boos on Cruz 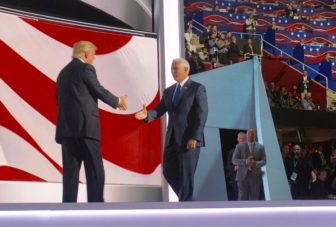 Cleveland — Connecticut delegates were primed to embrace Mike Pence, if only because he seems to have supplanted Chris Christie as Democratic Gov. Dannel P. Malloy’s least favorite governor. But they left the Republican National Convention late Wednesday night saying they believe Donald J. Trump did well to choose the Indiana governor as his running mate.

On a raucous night when delegates booed Ted Cruz for failing to endorse Trump in a prime-time address, Pence introduced himself to a national audience with a speech that touched lightly on abortion and made no mention of gay marriage, issues that Connecticut Democrats highlight and Republicans ignore, stressing Trump’s core themes of security and economic growth.

“I think he’ll play wonderfully at home,” said Annalisa Stravato of Wilton, the vice chair of the Connecticut GOP. “He brings a calmness to the ticket. He also has the institutional knowledge that everyone thinks Trump is lacking. I think between the two of them, they’ll be an outstanding ticket. I’m excited that this is going be good.”

To no one’s surprise, Trump appeared on stage to embrace Pence, the former congressman and favorite of social conservatives he chose over Christie, the New Jersey governor and former presidential candidate who had sought the role. Trump didn’t speak, but smiled, gave a thumbs up and departed to give Pence and his family their moment to bask in the applause of the convention. 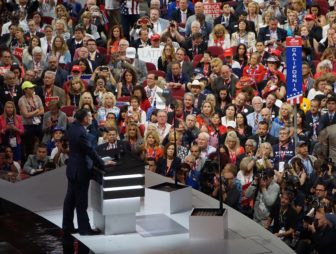 Trump had watched stone-faced with his family in the VIP box just off the floor as Cruz congratulated him for winning the GOP nomination, but pointedly failed to join other former Trump rivals who appeared earlier to unequivocally endorse him.

Marco Rubio backed him in a video. Wisconsin Gov. Scott Walker appeared in person. Newt Gingrich, who never made it out of the pool of vice presidential possibilities, tried to tell delegates that Cruz was misunderstood when he said Republicans can vote their conscience for anyone who would uphold the Constitution.

“In this election, there is only one candidate who will uphold the Constitution,” Gingrich said.

Delegates didn’t buy it, nor did Trump. On Twitter, Trump exulted in how the delegates booed Cruz and chanted, “Vote for Trump!” and “Keep your pledge!”

Laura Ingraham, the Glastonbury native and popular national conservative talk show host, hinted at Cruz’s intransigence in her remarks earlier. “Even all you boys with wounded feelings and bruised egos, you must honor your pledge to support Donald Trump now — tonight, tonight,” she said.

Watching as an alternate with the Connecticut delegation was Ann Brookes, who lost a close fight the GOP nomination for Congress in Connecticut’s 2nd District. She attended Glastonbury High School with Ingraham.

Cruz finished a distant third in the Connecticut primary behind Trump and Ohio Gov. John Kasich, who also has refused to endorse the GOP nominee, while declining an invitation to address the convention. Connecticut joined in the boos.

“I was very disappointed,” said Joseph Santopietro, the former Waterbury mayor here as a guest of the Connecticut Republican Party. “It would have been nice to just say, ‘Trump.’ If that’s your message, do a tape. Don’t take up primetime.”

Pence was self-deprecating, a trait unfamiliar to the brash GOP nominee. He introduced himself with a line often used in his career in Congress and as governor: “I’m a Christian, a conservative and a Republican — in that order.”

He mentioned this three children, a son who is a writer, a daughter who is a college student and another son who is a second lieutenant in the Marines, a sure applause line in an arena where delegate were primed to chant, “USA! USA!” He pronounced his mother the light of his life and his wife the “girl of his dreams.” He talked about job growth in Indiana and the state’s $2 billion surplus. And he drew a contrast between himself and Trump.

“He is a man known for having a large personality, a colorful style, and lots of charisma,” Pence said. Waiting a beat, he added, “I think he was just looking for some balance on the ticket.” 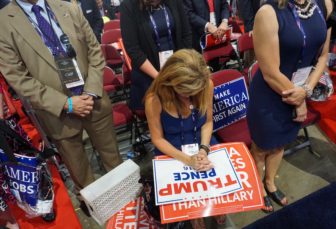 Annallisa Stravato prays as the third night of Republican National Convention closes with a benediction.

Pence gave a nod to social conservatives, saying the nation needs a Republican to fill the vacancy on the Supreme Court.

The election in November is not to pick a president for the next four years, but to set the direction of the court for the next 40 years, Pence said. The court has been deadlocked 4-4 on several key issues since the death of Antonin Scalia.

But Pence didn’t try to soften Trump’s image, a futile task. He praised him for defying political correctness and convention.

“Donald Trump gets it. He’s the genuine article. He is a doer in a game usually reserved for talkers. When Donald Trump does his talking, he doesn’t tiptoe around the thousand new rules of political correctness,” Pence said. “He is his own man. Distinctly American. And where else would an independent spirit like that find a following than in the land of the free and the home of the brave?”

Pence called Trump the right man for the times.

“This is the outsider, my running mate — turned a longshot campaign into a movement,” he said.

Kevin Moynihan of New Canaan, a late supporter of Trump, said he had known nothing about Pence, other than Malloy’s well-known gibes at him for opposing the relocation of Syrian refugees to Indiana and signing a religious freedom law that gays and lesbians say discriminatory to the LGBT community.

Benjamin Proto of Stratford, a Trump delegate, glanced at his smartphone and smiled as Pence took his bows. His “non-political” wife, Robyn, had texted him a quick review: “He cleaned up the Cruz mess well.”