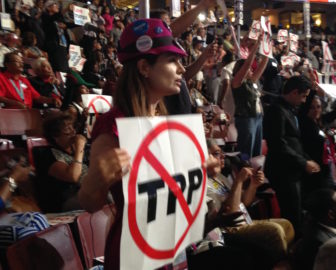 Connecticut Sanders delegate Mercedes Alonso holds up a sign opposing the Trans-Pacific Partnership trade pact on the first day of the convention.

PHILADELPHIA – What’s one thing Rep. Rosa DeLauro and Donald Trump have in common? Their shared opposition to a new trade pact with Pacific Rim nations that President Obama hopes Congress will approve before he leaves office.

The Trans-Pacific Partnership, or TPP, has a high profile at the Democratic National Convention in Philadelphia this week, with supporters of Vermont Sen. Bernie Sanders using it as a rallying cry in their opposition to the nomination of Hillary Clinton.

As Secretary of State, Clinton helped draft the accord among the United States and 11 Pacific Rim nations.

The convention hall is awash with “No TPP” banners, signs and buttons, and Democratic activists representing the nation’s labor unions and environmental groups are lobbying Democratic lawmakers to make sure their opposition to the pact stays solid.

Clinton now says she’ll oppose the accord, and DeLauro, D-3rd District, one of the staunchest foes of the TPP in Congress, says she believes her.

But DeLauro also said, “We have to trust, but we have to verify” Clinton’s TPP position, echoing former President Ronald Reagan’s remarks about negotiating an arms control agreement with former Russian President Mikhail Gorbachev.

“The TPP creates a new international commission that makes decisions the American people can’t veto,” Trump told a group of supporter in New York in June.

Meanwhile, administration officials have indicated Obama may press for a vote in Congress on the accord after November’s elections and before Clinton or Trump assumes office in January.

The political rhetoric surrounding the international agreement, which affects one-third of the world’s trade and nearly 40 percent of the global economy, has been heated. Obama and other supporters say it’s needed to keep the United States competitive in an increasingly globalized economy.

Labor unions, who are spearheading opposition to the TPP, point to the North American Free Trade Agreement, a trade pact former President Bill Clinton negotiated with Mexico and Canada, as proof of the “job killing” effects of international trade pacts. 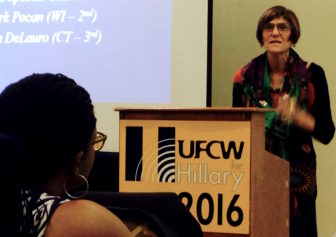 On Wednesday, DeLauro, the guest speaker at a gathering of members of the United Food & Commercial Workers International Union, said, “The dirty little secret in Washington about the Trans-Pacific Partnership is that it is not actually about trade.”

“This is an agreement designed to insulate the interests of multinational corporations,” she said.

On the day Obama was scheduled to address the convention, DeLauro asked the labor union members to redouble their efforts to oppose the pact and work to persuade the 28 House Democrats who voted to give the president “fast-track” authority to negotiate the deal to join them.

Rep. Jim Himes, D-5th District, was among that group of Democrats, and his vote riled labor leaders in Connecticut.

Himes said he has not made up his mind on TPP, even as he voted for fast track, which prohibits lawmakers from amending the trade pact and limits the Congress to an up or down vote on the deal.

“Remember, 28 Democrats voted for fast-track trade authority,” DeLauro said. “The next six weeks are a critical time to make your voices heard while members are back in their districts. You have to inundate them with your concerns about this agreement.”

DeLauro told the union members “you have to be cordial” with undecided lawmakers or those in opposition and reminded them that, “Congress is an institution that responds to external pressure.”

Clinton’s pick for vice president, Virginia Sen. Tim Kaine, who was officially voted as the nominee by delegates on Wednesday, also voted to give Obama fast-track authority.

Kaine, who will be introduced to the nation in a prime-time speech Wednesday, now says he opposes the trade pact.

The Democratic platform, adopted by delegates on Monday, is critical of the TPP. But Clinton supporters blocked adoption of a plank that would forbid Congress to vote on it.

DeLauro said she supported the platform’s language on the TPP. But she also said she preferred to have it say there should not be a vote on the trade pact during Congress’s lame duck session.

Unlike other union members who are concerned about the depth of Clinton’s opposition to the TPP, Roman Ulman, a Clinton delegate from Arizona and an official of the American Federation of State, County and Municipal Employees Retirees, said the candidate’s position is solid.