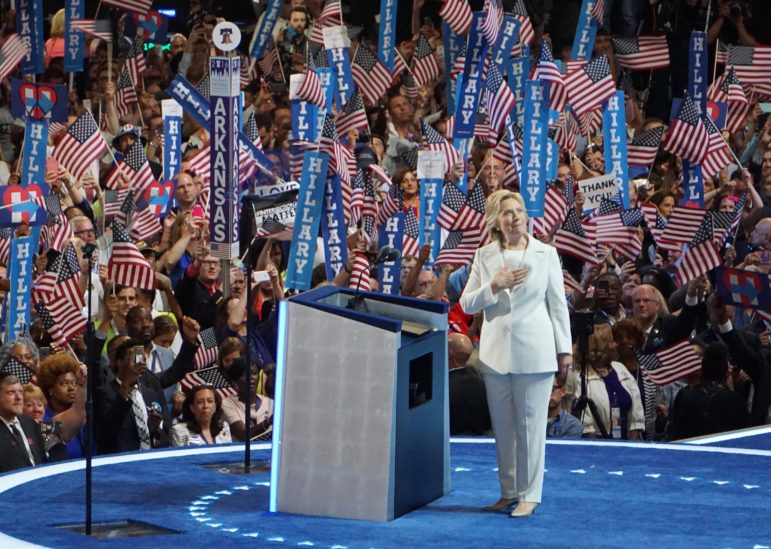 Hillary Clinton acknowledges sustained applause as she accepts the nomination to be president.

Philadelphia — On a night choreographed to mark the moment as an overdue breakthrough for women, Hillary Rodham Clinton accepted the Democratic nomination for president Thursday, opening what promises to be a bruising campaign against one of the most unconventional candidates ever to run for president, Donald J. Trump.

The final session of the Democratic National Convention was a pageant of pomp and patriotism, a procession of women from politics and show business, veterans greeted by flag-waving delegates, LGBT activists, a police officer’s widow, singer Katy Perry, the defiantly proud Muslim parents of a U.S. soldier killed in Iraq, and finally, Hillary and Bill Clinton’s only child, Chelsea.

Clinton, 68, strolled onto the the gray-blue stage at 10:27 p.m., an entrance timed for primetime, embraced the daughter who had just introduced her and immediately acknowledged the delegates who had backed her rival, Bernie Sanders.

“To all of you whose hard work brought us here tonight, and to those who joined our campaign this week, thank you,” she said. “What a remarkable week it has been. We heard the man from Hope, Bill Clinton, and the man of hope, Barack Obama. America is stronger because of Barack Obama’s leadership, and I am better because of his friendship.”

Clinton, who spoke for nearly an hour, wasted no time reaching out to Sanders, his supporters and their issues.

“Bernie, your campaign inspired millions of Americans, particularly the young people who threw their hearts and souls into our primary. You’ve put economic and social justice issues front and center, where they belong. And to all your supporters here and around the country, I want you to know: I’ve heard you. Your cause is our cause. Our country needs your ideas, energy and passion.”

She invited them to work with her and, implicitly, help elect her. “That is the only way we can turn our progress platform into real change for America. We wrote it together, now let’s go and make it happen together.” 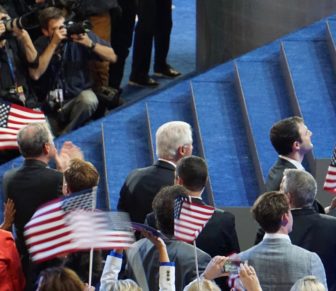 The photographers and Bill Clinton focused on Hillary Clinton.

Not everyone was ready to join. Delegates from the California delegation periodically interrupted with heckling about her support as a senator for the invasion of Iraq.  Other Sanders delegates protested silently by wearing glow-in-the-dark yellow shirts, a reminder of their numbers and commitment.

“On Monday, when Bernie gave his speech to the Democratic convention, Secretary Clinton’s campaign asked her supporters to be respectful and they were…as a courtesy to Bernie, our campaign would greatly appreciate if you would extend the same respect during Secretary Clinton’s speech.”

No Sanders delegates from Connecticut wore the yellow shirts or interrupted her speech. Several yelled at the hecklers to stand down.

Watching from the Connecticut delegation was Barbara Kennelly, the former congresswoman from Hartford, the daughter of President Kennedy’s national Democratic chairman, John Bailey, and the close friend of Geraldine Ferraro, the first woman on a major-party ticket.

It was Kennelly who nominated Ferraro to be Walter Mondale’s running mate in San Francisco in 1984.

“That was the beginning,” Kennelly said. “To me, this is the completion.”

Next to her was Marty Dunleavy, who helped coordinate the Sanders campaign in Connecticut. He held a Hillary sign. Behind them sat Leo Canty and Alan Simon, two Sanders delegates who wore black T-shirts protesting the TPP trade deal. 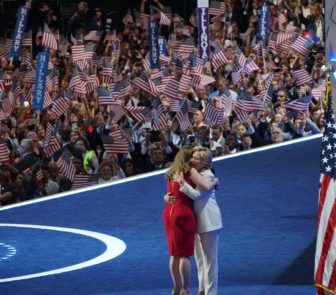 Like most of the Sanders delegates from Connecticut, a state that gave Clinton a narrow primary victory, Canty and Simon intend to vote for the Democratic ticket. Connecticut’s Sanders delegates were polite, and most cheered Clinton and joined in standing ovations, especially when she thanked the Vermont senator for his help.

But in the nearby California delegation, and in those of several other states, Sanders supporters heckled Clinton, chanting, “Walk the walk,” “No more war,” and “TPP,” a reference to a proposed trade pact with Pacific Rim nations opposed by Sanders supporters—and more recently by Clinton, who helped negotiate it as Obama’s secretary of state.

Debra Cohen, one of the Sanders delegates who has not decided if she will support Clinton in November, said the speech offered no surprises. “It was exactly what I expected; now she needs to do what she promised,” Cohen said.

Angie Parkinson, a social studies teacher from East Hartford, said, “We will change our minds about her when she walks the walk.”

“It made clear that we don’t have a choice if we want to have a stable country,” she said.

Frank Alvarado said he was glad Clinton spoke about helping veterans and raising the minimum wage. “She hit all the points,” he said.

In a Tweet, Sen. Chris Murphy said, “Just remember how amazing it is for a presidential candidate to openly talk about the 2nd Amendment as part of a general election strategy.”

Murphy and other members of the congressional delegation gave up their credentials for the final night to other Democrats.

Clinton pledged to be a president for all Americans.

“Tonight, we’ve reached a milestone in our nation’s march toward a more perfect union – the first time that a major party has nominated a woman for president,” she said. “Standing here as as my mother’s daughter, and my daughter’s mother, I’m so happy this day has come.”

Where the GOP convention promoted the continued reliance on coal, and a weakening of environmental regulation, Clinton got applause for simply saying, “I believe in science. I believe climate change is real.”

She pledged to seek comprehensive immigration reform, not giving details. She promised in her first 100 days in office to work with both parties to “pass the biggest investment” in jobs.

Reinforcing a theme of the previous three days, she questioned Trump’s fitness for high office.

“Ask yourself: Does Donald Trump have the temperament to be commander-in-chief?” Clinton asked. “Donald Trump can’t even handle the rough-and-tumble of a presidential campaign. He loses his cool at the slightest provocation.” 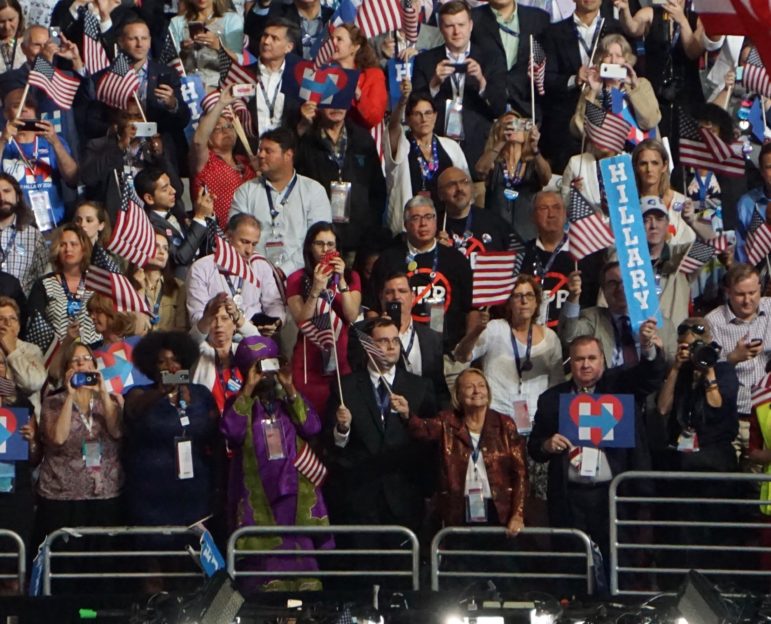 Former congresswoman Barbara Kennelly, who nominated Geraldine Ferraro in 1984, at lower right, next to Marty Dunleavy.