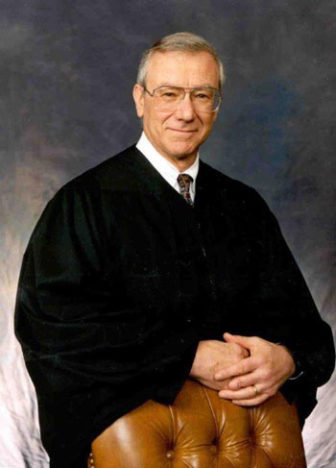 David M. Borden, a former justice of the Connecticut Supreme Court, died Sunday morning of cancer, according to officials at the state’s Judicial Branch. He was 79.

“Justice Borden believed deeply in the rule of law, open and transparent courts and access to justice for all,” Connecticut Supreme Court Chief Justice Chase T. Rogers said Sunday. “To that end, he left indelible prints wherever he served during his remarkable judicial career.”

First nominated to the Supreme Court by Gov. William A. O’Neill in 1990, he served on the state’s highest judicial panel until reaching the mandatory retirement age of 70 in 2007. He served as acting chief justice of the court from April 2006 to April 2007. Before serving on the Supreme Court, he was one of the first five judges appointed to the state’s Appellate Court in 1983.

Borden was the principle architect of the Connecticut Penal Code in 1969, a leader in pushing for greater transparency in the state’s court system and an advocate for juvenile sentencing reform.

“No legal issue was too challenging for him, and he never lost sight of the importance of a case to an individual party,” Rogers said. “Moreover, Justice Borden was an extraordinary mentor to his law clerks over the years; they not only thrived under his leadership but also viewed him as a family member. Judges too viewed Justice Borden as a mentor, and many sought his wise counsel over the years, including myself.

“He also had a quick wit, endless energy and an insatiable curiosity, particularly when it came to travel and experiencing different cultures,” Rogers said. “He loved life and at his core, Justice Borden loved his family most of all: his wife, Judy, his children, grandchildren, siblings and extended family.  In other words, Justice Borden always had his priorities straight, and his perspective on what was important contributed greatly to making him the judge and justice he became.”

Gov. Dannel P. Malloy praised Borden, saying, “Justice Borden dedicated his career to ensuring that the State of Connecticut has a strong, effective, and fair judicial system that serves the people of our state, and his work will forever have a lasting impact.”

During that time, he served as executive director of the Commission to Revise the Criminal Statutes from 1963 to 1971 and worked for the General Assembly as the chief counsel to the Joint Committee on the Judiciary.

His seven-year stint on the Connecticut Appellate Court was followed by his 17-year tenure on the Connecticut Supreme Court. In his final year on the high court, he served as acting chief justice and created the Public Access Task Force, which led to greater transparency in the Judicial Branch.

After his retirement from the court, he continued to serve as a judge trial referee for the Connecticut Appellate Court. In 2011, he was appointed to lead the General Assembly’s Eyewitness Identification Task Force, which has been working to improve the process in which witnesses identify suspects in a lineup.