Call it corporate welfare or investment, Malloy says it pays off 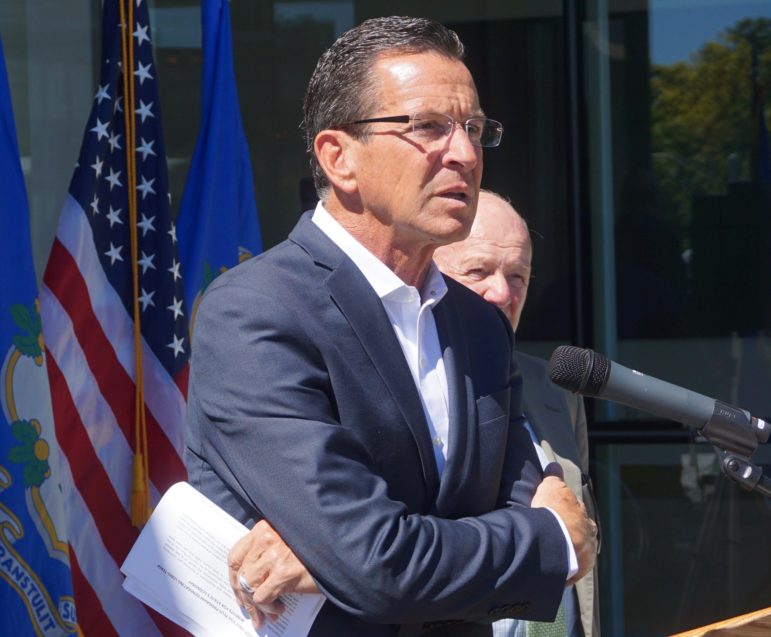 New Haven — Gov. Dannel P. Malloy gave an upbeat assessment Tuesday of what Connecticut is getting for the $256.6 million in direct state assistance he’s given to some of the world’s biggest and richest corporations, investments often made in the face of genteel blackmail — the knowledge another governor may be waiting with a competing offer.

He stood outside the gleaming new downtown headquarters of Alexion, the pharmaceutical company that promised to retain 368 jobs and create at least hundreds more in return for $26 million in direct aid: a $6 million grant and a $20 million loan, totally forgivable with growth of 300 jobs. Malloy says the company has added 510 jobs — and is growing.

Overall, according to a report by the Department of Economic and Community Development, the state’s First Five Plus program for corporations able to promise a minimum of 200 new jobs has helped attract private investments of nearly $1.3 billion, retain 13,349 jobs and create 3,759 jobs. 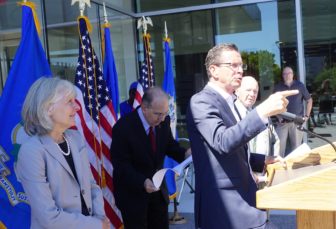 Malloy makes a point. At left is Catherine Smith and Sen. Martin M. Looney. Sen. Joe Crisco is at right.

Of the 13 companies to get the aid, five are short of the 200-jobs threshold, but the others have each produced between 243 and 618 jobs. One of the laggards, EDAC Technologies of Cheshire, received $48 million in direct aid, including a $10 million grant. It has produced four net new jobs.

The report dealt in a mix of hard numbers, reasoned projections and the unknowable: How many of those dollars would have been invested and jobs created without the governor’s opening the state’s checkbook, beginning with $71 million in total aid to Cigna in 2011?

Call it investment. Call it corporate welfare. Even call it extortion.

But Malloy says it’s here to stay until the unlikely event of the nation’s governors agreeing over drinks some night to stop bidding against each other, creating an environment where General Electric, one of the world’s richest corporations, can insist that its relocation from Fairfield to Boston be financed by the taxpayers of Massachusetts.

“So, yes, I bay at the moon on that one,” Malloy said. “But on the other hand in the absence of everyone else putting their tools down, we have to keep ours in use.”

More recently, that has meant $30 million in tax credits and $22 million in direct assistance to Bridgewater Associates, the world’s richest hedge fund — and the source right now of 1,402 jobs, most of them held by well-paid residents who pay significant income taxes.

Bridgewater doesn’t need the help, but even a liberal legislative leader joined Malloy at the news conference to say the aid is defensible.

“I say this is part of the price of doing business in the currently competitive economy where every state is looking to attract businesses away from every other state, and that is part of the problem,” said Senate President Pro Tem Martin M. Looney, D-New Haven. “If you are going to be competitive in that market, there’s a whole lot of high-paying jobs, you sometimes have to get into these deals that have a lot of upfront costs in order to get a benefit you’re hoping for down the road.”

“We know we’re going to see a return to the state. That’s the whole idea,” Smith said. “This is not just throwing money at companies. This is investment. We’re looking to see a payback to the state.”

Malloy was asked if he ever had the feeling he was being played.

“Sure. Absolutely,” he said. “There’s no doubt in my mind. That works both ways. We’ve had people approach us who simply wanted us to have discussions that they could quote elsewhere.”

The last question Tuesday was about one that got away: General Electric, which relocated its headquarters from its suburban, 1970s-era campus in Fairfield to downtown Boston. With the relocation, Boston gained 200 headquarters jobs from Fairfield and the promise of hundreds more, some new and some from elsewhere.

GE made clear that even had it stayed in Connecticut, it would have relocated to an urban location, presumably in Stamford or New Haven. In talks with Connecticut, state aid was on the table. The city of Boston and Commonwealth of Massachusetts ultimately assembled a package that Malloy says will be worth $162 million.

GE’s loss was an embarrassment that prompted yet another round of unflattering portrayals of Connecticut’s business climate under Malloy, but it produced one upside – saving Malloy from having to defend taxpayer underwriting of a move from Fairfield to say, Stamford, the governor’s hometown and a favorite of corporations.

Malloy’s administration did provide a $20 million grant to Synchrony Bank, a financial-services company spun off by GE as it focused on its digital and heavy manufacturing businesses. Synchrony, based in Stamford, employs 601, including 291 people in net new jobs since accepting the state assistance. 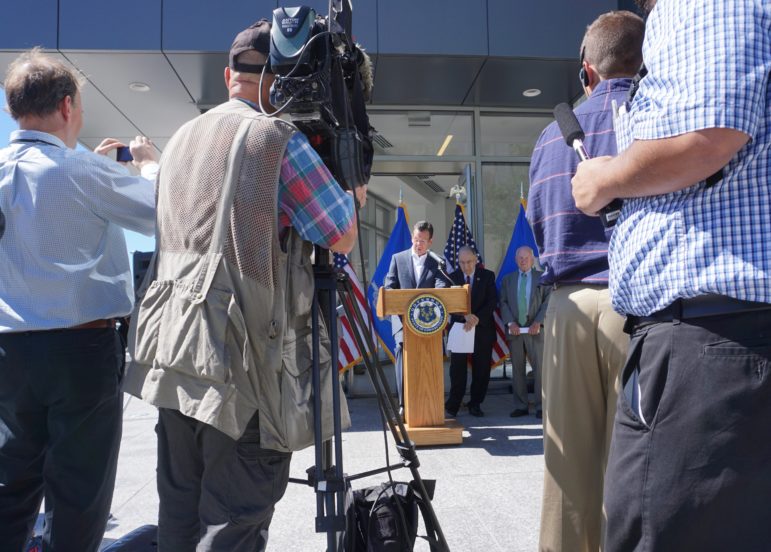