Blumenthal, Murphy up for big promotions if Dems take over Senate

Washington – If Democrats reach their goal of retaking control of the Senate in November’s elections, Connecticut’s senators have much to gain.

If the Senate is in the hands of a Democratic majority, and Sen. Richard Blumenthal wins re-election, he and fellow Democratic Sen. Chris Murphy will zoom up in seniority much faster than their predecessors. That’s chiefly the result of an unprecedented number of retirements and defeats in the Senate since the Connecticut senators assumed office.

Republicans now have a 54-46 majority in the Senate. Democrats have to net at least four seats to take back the majority, or five if Donald Trump becomes president, because of the vice president’s role as the Senate tie-breaker.

Trump has hurt some Republicans running for Senate in blue or “purple” states this year. The GOP was already the underdog because of a map that has Republicans defending 24 seats and Democrats only 10. Republicans have vulnerable incumbents in Illinois, Wisconsin, New Hampshire, and Pennsylvania, while Democrats are defending only one at-risk seat, in Nevada, where Senate Minority Leader Harry Reid is retiring.

But a Democratic takeover of the Senate is not a given.

“Democrats’ hopes that a wave will develop appear to be dwindling, which would keep GOP losses between four and six seats,” said Jennifer Duffy of the nonpartisan Cook Political Report.  “Republicans are in better shape today than they were a month ago, but they still have seats in danger: Indiana, New Hampshire, North Carolina and Pennsylvania.”

“Although I give an edge to [Sen. Marco] Rubio…it will still be a close race,” she said. 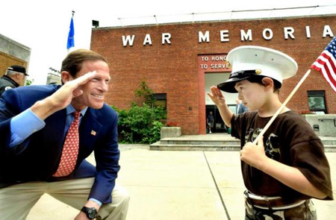 U.S. Sen. Richard Blumenthal is hoping for a chairmanship on the Veterans Affairs Committee.

Blumenthal said he hopes to win the chairmanship of the Senate Veterans Affairs Committee, where he is now the highest-ranking Democrat. He said a flip of the Senate would also probably bring him a promotion as the chairman of the subcommittee with authority over consumer affairs issues on the wide-ranging Senate Commerce, Science and Transportation Committee. That panel also has oversight of the insurance industry.

Blumenthal said he also may win a subcommittee chairmanship on the Judiciary Committee, too, but that’s a little less likely.

“They know I’ve been active on immigration issues,” he said.

Blumenthal said he does not take for granted the Democrats’ chances of winning control of the Senate – which the party lost in 2014 – or even his own re-election.

“This election season is the most unpredictable and unstable in recent history, so there’s no assuming with certainty what will happen,” Blumenthal said. 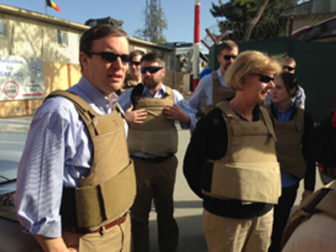 Sen. Chris Murphy on a trip to Afghanistan and Pakistan.

He also hopes to win a subcommittee chairmanship on the Senate Appropriations Committee, a coveted post.

Murphy, who unlike Blumenthal is not up for re-election this year, said he doesn’t know which of the subcommittees he might chair.

“I’m still pretty junior, so I’m not going to chair the defense subcommittee if we win the majority,” Murphy said. “But there are ways to help Connecticut on every one of those subcommittees.”

Blumenthal said he’s been helping other Democrats who could tilt the Senate to the Democrats in November’s election. So has Murphy.

Blumenthal has donated more than $135,000 from his leadership PAC, the Nutmeg PAC, to Democratic Senate candidates; and his re-election campaign has sent out a number of appeals to his donors to give to Democratic candidates in hot races.

One urged supporters to give to New Hampshire Gov. Maggie Hassan, who is in a tight race against Republican Sen. Kelly Ayotte.

“We have to invest in Maggie; it’s the only way we can take back the Senate,” Blumenthal’s appeal said. “If you care about the issues she and I are fighting for, I’m asking you to give today.”

Meanwhile, Murphy has donated at least $94,000 from his MurphPAC to Senate Demoratic candidates.