Citing a host of job and program cuts and funding levels that threaten hospital viability and patients’ access to care, Connecticut hospitals have asked the federal government to declare that the state is violating federal law by paying inadequate rates for treating Medicaid patients and imposing a $556 million tax on the industry.

The petition to the federal Centers for Medicare and Medicaid Services, filed Tuesday, is part of a two-pronged challenge to Connecticut’s fiscal policies toward hospitals. On Tuesday, the Connecticut Hospital Association and 20 hospitals also moved their state-level challenge to the hospital tax to Superior Court. They previously appealed the tax through administrative channels, but their claim that the tax is illegal was denied by two state agency heads last month.

“Connecticut’s Medicaid payment system has degraded to a point where provider payments are no longer sufficient to assure efficiency, economy, quality of care, and adequate access to care for Medicaid beneficiaries,” violating federal law, says the petition, signed by the Connecticut Hospital Association and the heads of 21 hospitals. (Johnson Memorial Hospital signed on to the petition but not the state-level appeal.)

The petition says hospitals have laid off 1,390 workers and eliminated more than 1,700 open positions since 2013. It says many hospitals are now considering eliminating programs – including obstetrics and surgical groups – and are assessing their ability to meet bond covenants.

Chris McClure, a spokesman for Gov. Dannel P. Malloy’s administration, said it was not surprising that the hospital association was availing itself of legal remedies.

“Nevertheless, we are confident the state will prevail as the legislated measure is legally and properly implemented,” he said.

Hospitals have long argued that the state has been straining their budgets through the tax, cutting payments to hospitals and inadequately paying them for treating patients covered by Medicaid, which now covers close to 750,000 state residents.

The Malloy administration has countered that hospitals have seen a dramatic increase in payments from Medicaid since the rollout of the federal health law, and it says many hospital systems have been profitable in recent years. But hospitals say that, because Medicaid pays them less than it costs to care for patients, treating more Medicaid patients is not improving their bottom lines.

In their petition to the federal government, the hospitals describe the state as operating an “illegal reimbursement scheme” for Medicaid, paying rates for inpatient care that have been frozen since 2008. Some payment rates for hospital services have not been updated since 2002, the petition notes.

The petition also argues that the tax on hospitals has effectively made “a relative handful of organizations” a major source of state revenue.

The tax was established in 2011 as state lawmakers grappled with a massive budget deficit. Since then, lawmakers have increased the tax by hundreds of millions of dollars.

When it first proposed the tax, the Malloy administration characterized it as a mechanism to get the state more federal money. That’s because, by taxing hospitals and redistributing the money to the industry, the state can collect federal matching funds. The first year of the tax, the 2012 fiscal year, hospitals paid just over $349 million in taxes but received back $399.5 million – leaving the industry with just over $50 million more than it paid in.

But since then, the state has increased the amount collected from hospitals and reduced what it gives them back (which also reduces the amount of federal money the move brings in). In the 2013 fiscal year, hospitals paid $26.3 million more than they got back. This fiscal year, the tax is expected to total $556.1 million, and hospitals are slated to receive $117.6 million back – a net tax of $448.5 million.

The amount hospitals get back, referred to as supplemental payments, has been subject to significant political wrangling in recent years. The Malloy administration withheld the payments last year to cope with midyear budget deficits before ultimately agreeing to pay a reduced amount after negotiations with legislators. 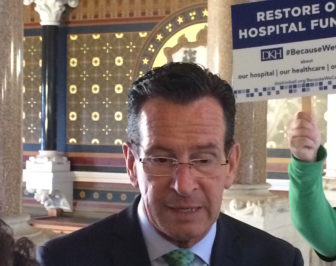 Gov. Dannel P. Malloy speaks to reporters as advocates argue to shield hospitals from cuts during the last legislative session.

The hospitals’ petition characterized that as making the payments subject to “protracted and irresponsible manipulation by state officials.”

The hospitals ask the federal government to take several steps, including not approving any changes to the state’s Medicaid plan that would reduce reimbursement rates to hospitals, holding back money to offset money collected improperly as part of the tax, and limiting the amount of money from health care taxes that can be used for purposes other than health care. They also ask the federal government to require the state to annually update hospital rates to account for inflation.

The petition attributes a number of hospital cuts and decisions to the strain of Medicaid rates and provider taxes, including Johnson Memorial Hospital’s 2015 bankruptcy, layoffs at Hartford HealthCare, workforce cuts at Day Kimball Hospital, and decisions by the parent company of St. Francis Hospital and Medical Center to postpone new equipment purchases, abandon building improvements and eliminate more than 100 positions.