New Haven labors with long lines to vote and register 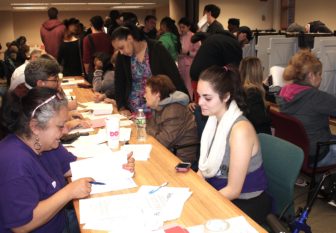 Several New Haven polling places had waits exceeding two hours to vote, and one poll ran out of ballots for about 15 minutes as the city coped with what officials said was a heavy turnout.

Told a police officer was on his way with additional ballots, Ryan Munden, the moderator at Wilbur Cross High School in East Rock, responded, “Good. I hope they are.”

He’s been the moderator at the location for 10 years, and it’s never been this busy.

At New Haven City Hall wait times to register to vote also surpassed two hours. Poll workers said the top reason voters were giving for registering on Election Day was that they had moved into New Haven from elsewhere. In previous presidential elections, unregistered residents would have been turned away at the polls, but the state changed the law a couple of years ago so voters could both register and vote on Election Day.

Statewide, 9,000 people had registered to vote by 1 p.m. Tuesday, the secretary of the state’s office reported.

The office estimated voter turnout statewide at 29 percent by midday. It was unclear how that compares to previous elections. In 2012, a total of 78 percent of voters went to the polls.

At the Hall of Records in New Haven, the line for first-time voters – many of them Yale University students – was out the door.

“This is the student line,” explained Kate Tewksbury, a freshman from New York. “I have been here more than two hours.”

Moderator George Carter said 1,274 voters had cast ballots by shortly after 1 p.m. out of 5,553 registered voters for that location.

“I needed more official checkers, more booths and the signage needed to be better,” Carter said. He pointed to the five booths where voters could mark their ballots. “One, two, three, four, five…I’ve had five all day. I still need more.”

Nearby U.S. Rep. Rosa DeLauro, D-New Haven, was waiting in line to vote with her 102-year-old mother.

“Look at this. People want to exercise their right to vote,” she said during an interview. “This is great.” 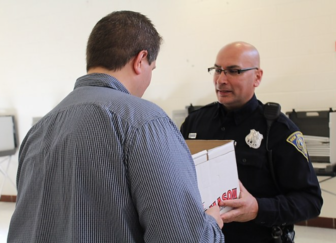 Her line, for those who had voted in previous elections, was 30 minutes long.

The secretary of the state’s office had heard about long lines in New Haven and Middletown Tuesday morning. In response, the office deployed staff in an effort to cut wait times to less than one hour.

Also, at four or five polling locations throughout the state, the scanners into which voters feed their ballots broke.

“It happens from time to time that a machine will have some issues,” Gallahue said. “If the votes can’t be fed into the tabulator, there is an auxiliary bin on the side. You can put those votes into a locked bin that you can then feed into afterwards when the machine is working.”

While there have been a few hiccups, Gallahue highlighted that by and large voting is going well. “These are outliers,” he said

In smaller towns, Gallhue said his office was hearing of turnouts anywhere between 5 and 20 percent in the first two hours. In the big cities, certain polling locations faced lines exceeding one hour.

“It should be speeding up a bit now,” he said.

In Hartford, the Rawson Elementary School in the North End had the wrong ballots for state representative for a very short time Tuesday morning, the secretary of the state’s office reported.

But, the office said, officials at the polls informed the state the problem had been caught quickly and affected few ballots. The secretary of the state’s office had earlier indicated that the problem had persisted for much longer and resulted in people voting for the wrong candidates.

“There was an issue of the wrong ballots being available. It happened that the ballots for one district were accidentally delivered to another district,” said Patrick Gallahue, spokesman for Secretary of the State Denise Merrill. 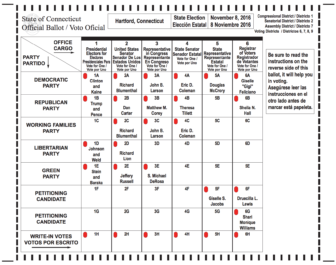 A sample ballot for polling places in the 7th House District in Hartford.

The snafu comes two years after Hartford had problems at two separate polling locations in 2014 after ballots were late arriving to the polls. Those problems led to a Superior Court order to keep the polls open late, followed by an investigation and additional training by the state’s chief election monitor for Hartford voting officials.