As states vie for new opioid-fighting grants, Blumenthal puts CT in the mix 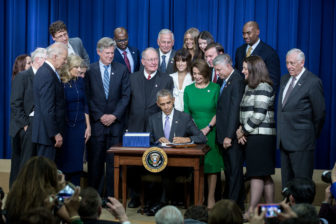 Washington – No sooner was the ink dry on President Obama’s signature on the 21st Century Cures Act than states, including Connecticut, started competing for new law’s $1 billion in grants to fight opioid addiction.

The massive bill – which also funds Obama’s “cancer moonshot,” reforms the mental health system and expedites federal approval of certain drugs – provides $500 million this year and $500 million next year to states hardest hit by the opioid epidemic. There’s a lot of competition for that.

Sen. Richard Blumenthal, D-Conn., wants to make sure Connecticut is not overlooked.

Instead of setting a formula to distribute the new grant money, the bill Obama signed Tuesday says: “In awarding such grants, the Secretary [of Health and Human Services] shall give preference to States with an incidence or prevalence of opioid use disorders that is substantially higher relative to other States.”

Blumenthal sent Attorney General Loretta Lynch and HHS Secretary Sylvia Burwell a letter that said, “As the opioid epidemic continues to spread, I urge the federal agencies tasked with distributing these funds to ensure that Connecticut receives a fair and ample allocation.”

Blumenthal told the officials that drug overdoses in Connecticut have “skyrocketed” to approximately 2,000 between 2012 and 2015, with heroin deaths increasing by 27 percent and fentanyl deaths by 148 percent in the one-year period between 2013 and 2014.

“Worse yet, Connecticut is on pace to surpass last year’s record high number of opioid overdoses, with 528 projected by the end of 2016,” the senator wrote.

Blumenthal said Connecticut’s state government spends over $65 million on treatment for opioid dependency,” showing the state’s willingness to use all available funding to combat this deadly problem.”

“However, those who I spoke with at the state level consistently noted that these goals could not be completed without robust federal support and resources,” he said.

Sen. Chris Murphy, D.-Conn., whose mental health reform bill was included in the 21st Century Cures Act, said he called Burwell and “made it clear…that Connecticut needs emergency funding to spare more families from the devastation of addiction.”

According to the Centers for Disease Control and Prevention, Connecticut is not among the top states as far as overdose-related deaths, which the agency says are largely from opioids. Nor is Connecticut among the states with the largest year-over-year increases in overdose deaths.

But the problem of opioid addiction, which often begins with the abuse of pain medication that leads to the use of heroin, is a problem in every state and is considered a national crisis.

But more than 80 percent of Americans who need opioid addiction treatment do not have access to such services.

The 21st Century Cures Act hopes to shrink that statistic. The new grants can be used by states to:

Michael Botticelli, the White House drug czar, said states will have some flexibility to use the grant money for prevention and recovery support. But the priority is expanding treatment in rural areas and other places were health providers are scarce, he said.

“We know that in rural parts of Pennsylvania, West Virginia and other parts of the country access is a problem, and we want to make sure states are really looking at and proposing plans to us to significantly reduce that treatment gap,” Botticelli said at the signing of the 21st Century Cures Act at the White House.